The Royal Edinburgh Military Tattoo is an absolutely amazing event. Held over the course of 3 weeks in August each year as part of the Edinburgh Festivals annual program – and it runs at the same time as the Edinburgh International Festival, Festival Fringe, Book Festival and Arts Festival. This means that if you are visiting for the Tattoo, you have a whole plethora of other festivals activities and events to keep you organized throughout the rest of your visit to Edinburgh.

If you have never heard of the Tattoo you are in for a treat, and below I’ve got a little bit about what it’s all about, a whole heap of photos to help you really get a feel for what’s going on and a quick 1 minute video to try and help you feel like you’re there! 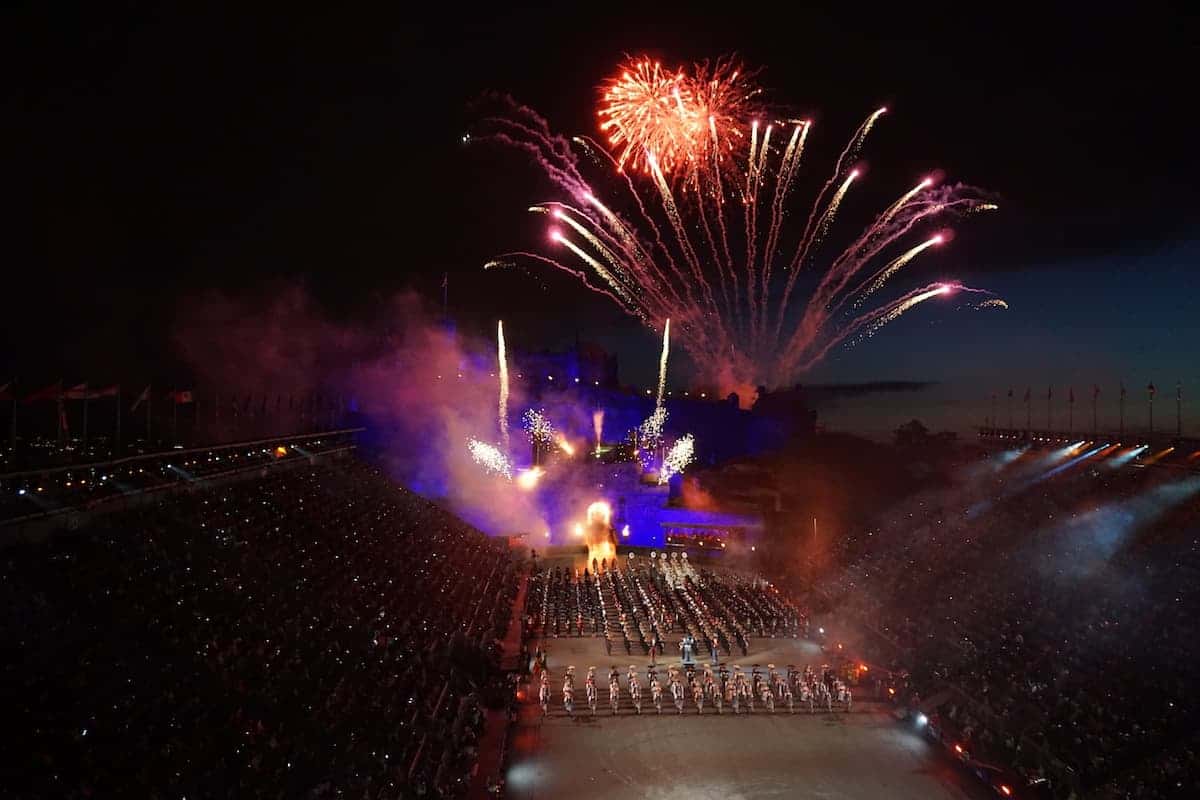 RELATED – Did you know that Edinburgh is a true Festival City? And the Royal Edinburgh Military Tattoo is just one of them. There are 11 Main Edinburgh Festivals in 2019 – read all about them here. 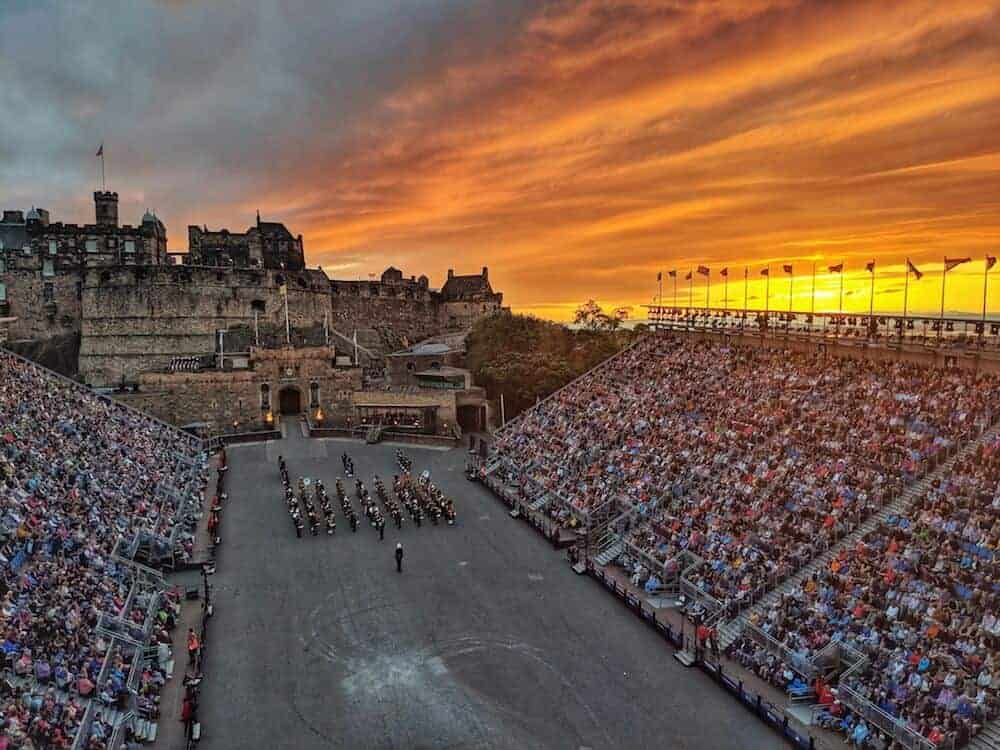 With the stands packed with eager spectators, and as the sun sets, the performers enter the Esplanade and the beautiful sound of bagpipes and marching bands can be heard. 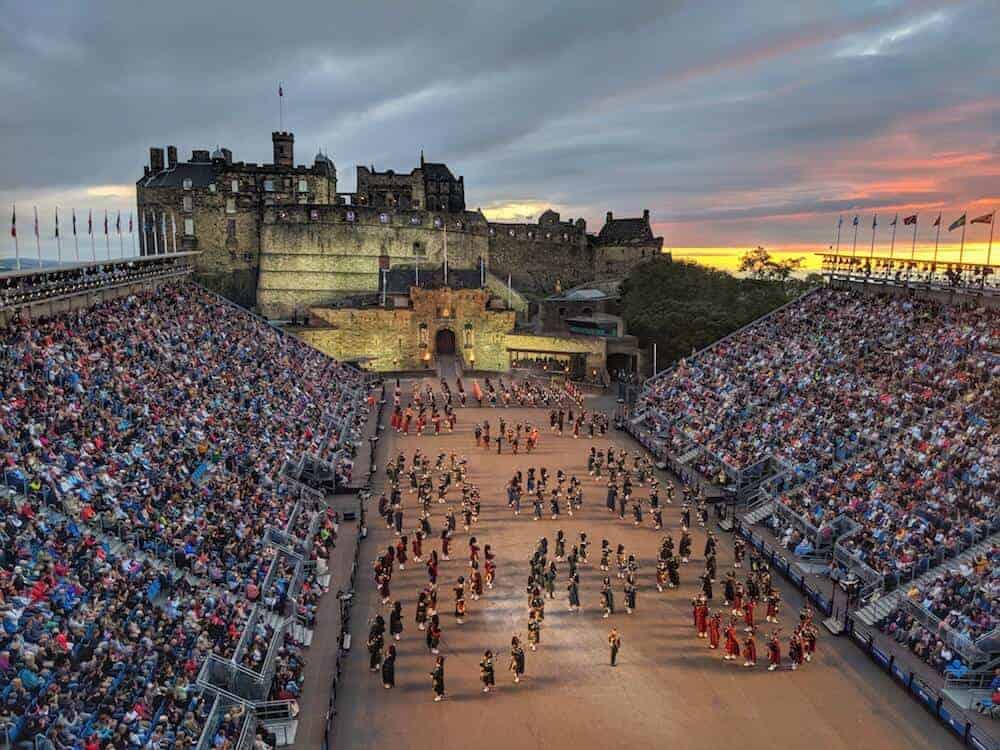 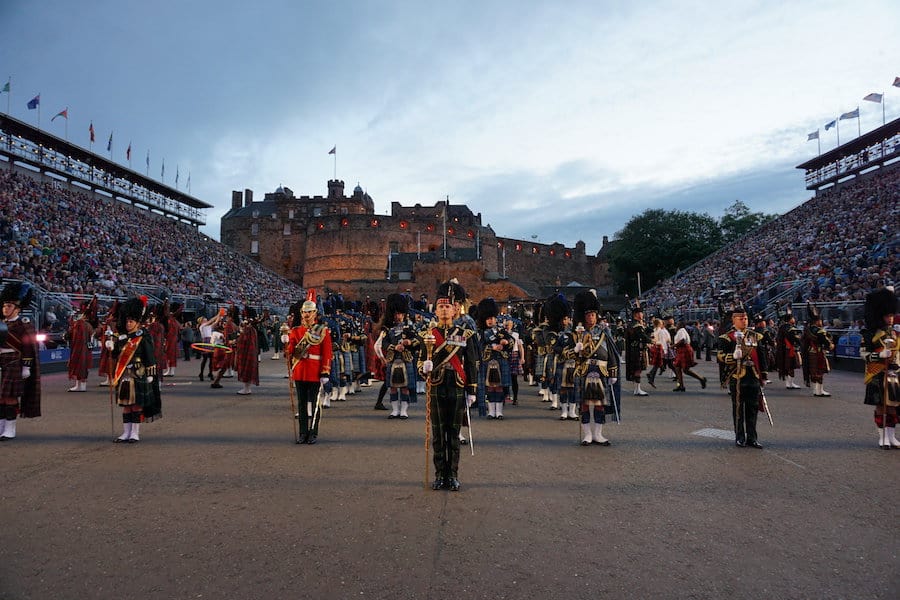 On the Esplanade- The Opening of the Tattoo is a spectacle like no other. The massed pipers hail from around the globe and the 13 bands in the 2018 Edinburgh Military Tattoo were mostly from the UK and Australia. 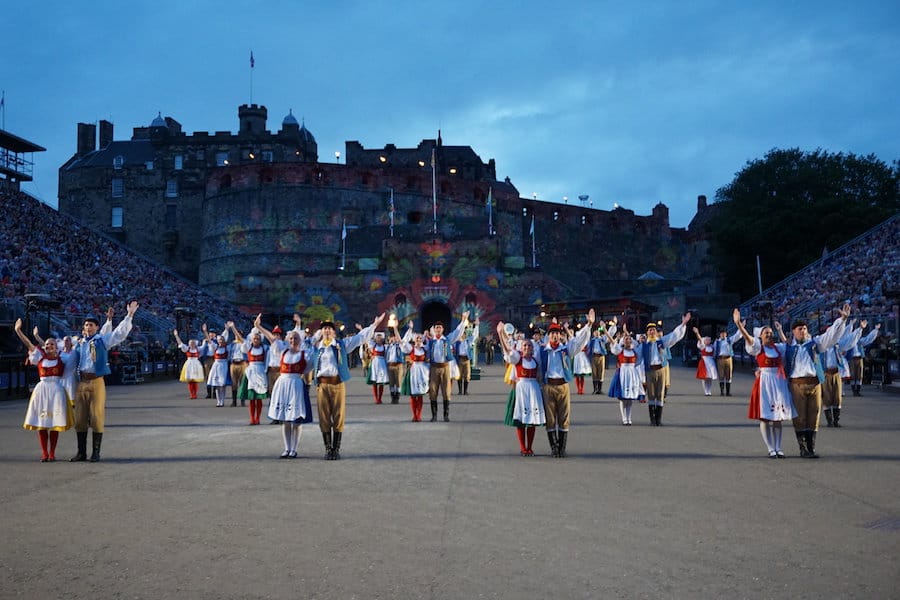 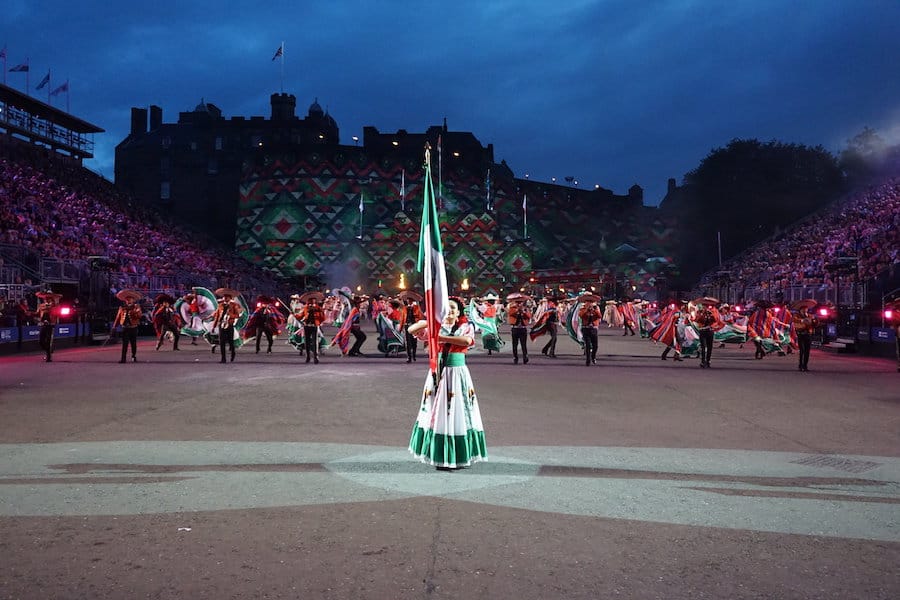 Over 100 Performers from the Banda Monumental de Mexico electrified the crowd with traditional mariachi music intertwined with their rendition of the popular Spanish track, Despacito. 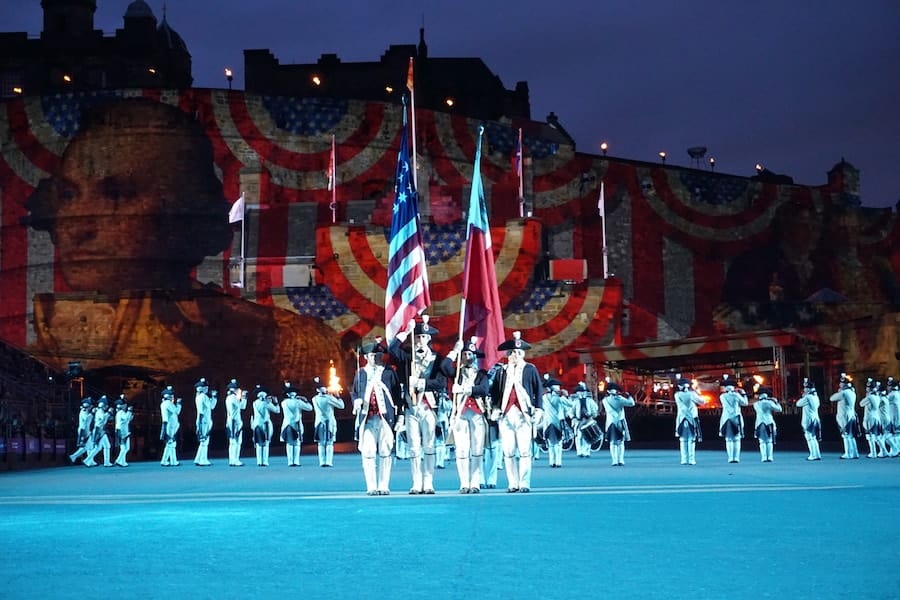 From the USA: The Middlesex County Volunteers Fifes & Drums and Fellswater (or MCV for short) brought catchy drums alongside huge flag projections across the Castle facade.

The Worldwide Tattoo Dance Company brought bright lights, energy, colour and bubbles to the Esplanade…(and I’m sorry I didn’t have my zoom lens for this shot – the bubbles were beautiful) 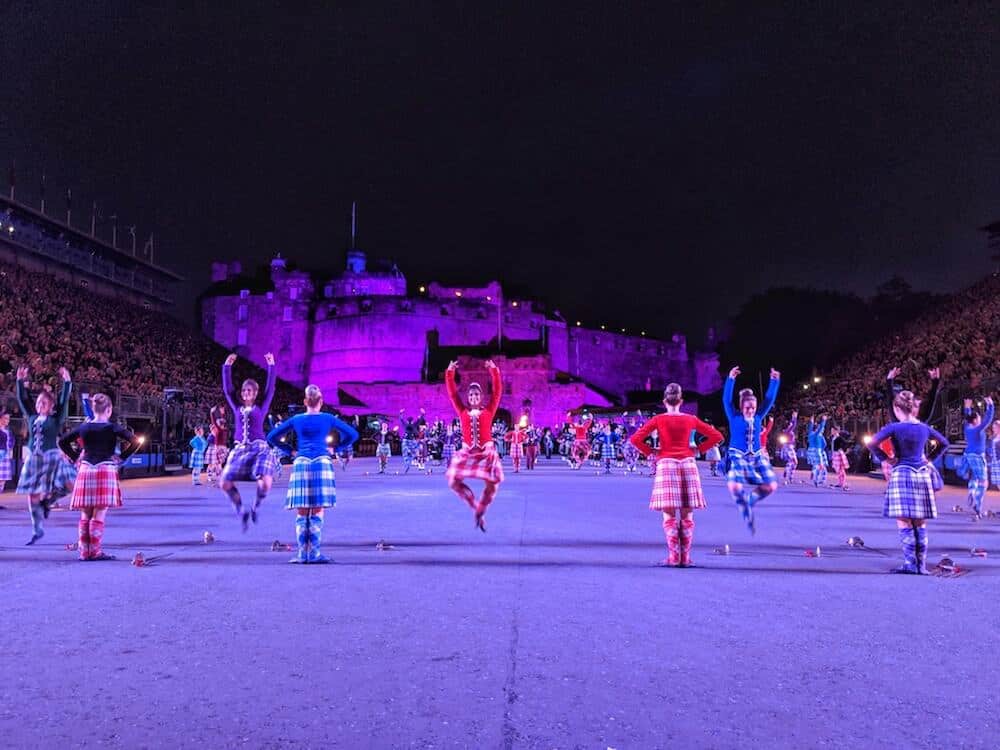 … along with tartan, highland dancing, sword work and more… 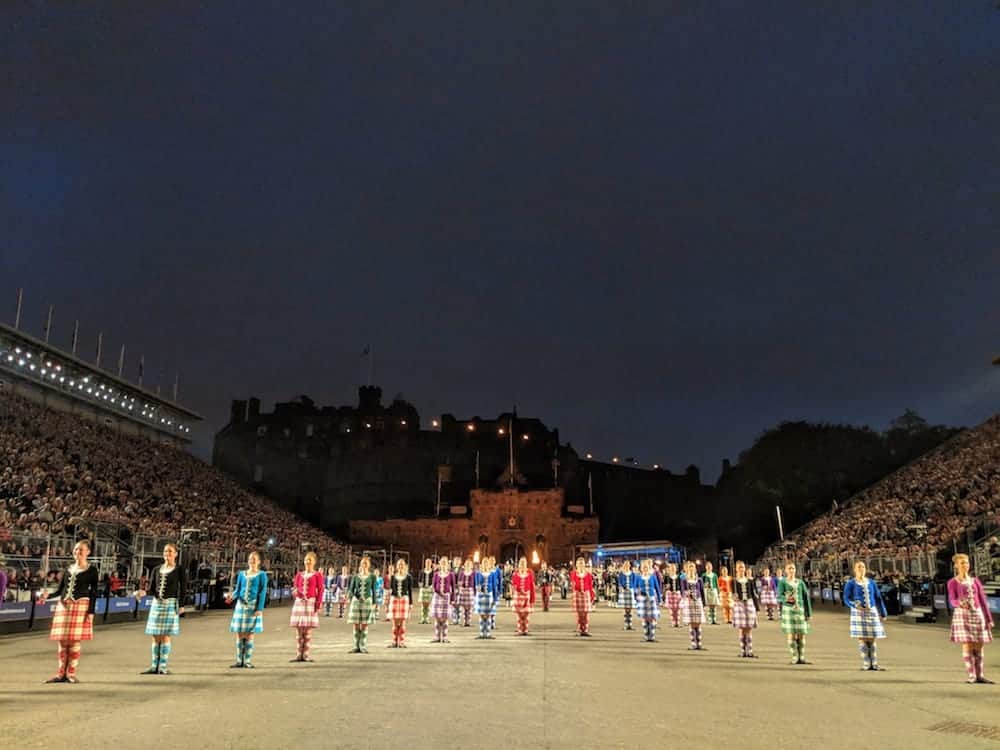 … before ending in glorious formation. 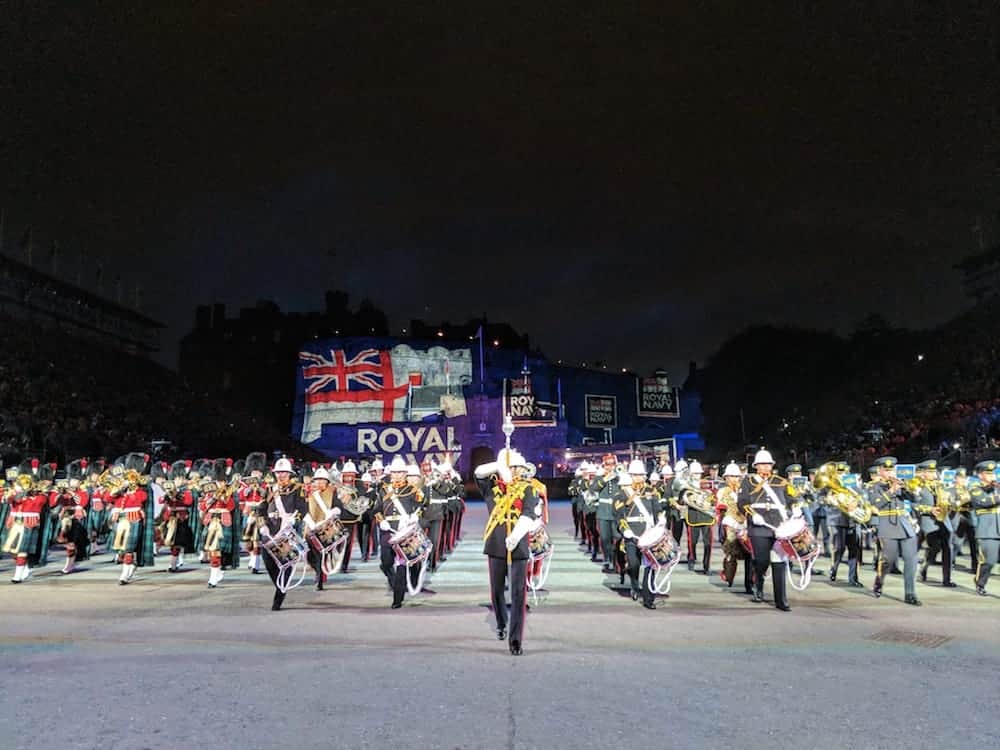 The Royal Navy March alongside the Massed Pipes and Drums. 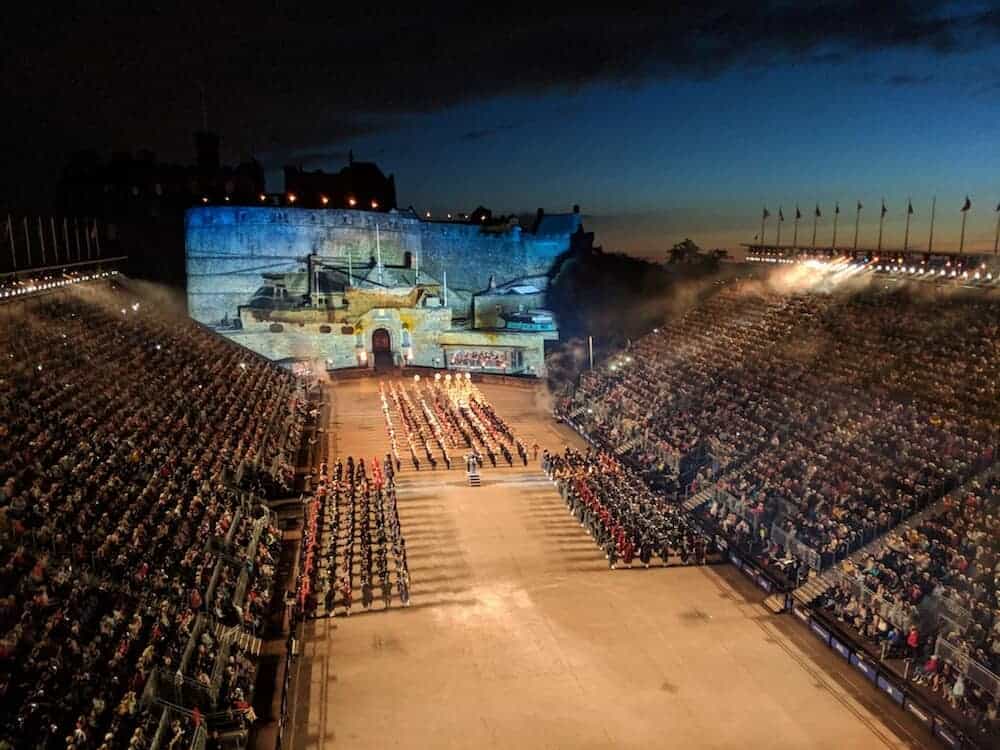 As part of the finale, 800 performers and the supporting cast collect on the Esplanade to rousing rounds of applause.

The Tattoo is accompanied by fireworks for every performance, however on 4 special nights there is an extended fireworks display – and it’s absolutely stunning. 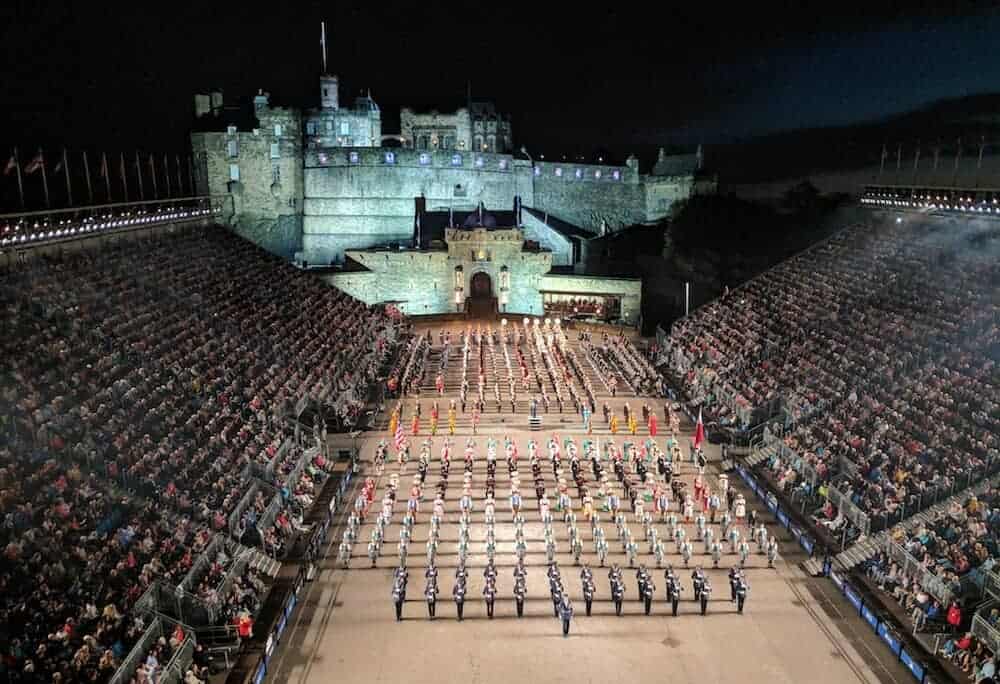 After the Fireworks and with the whole cast lined up on the Esplanade, there is a rendition of Auld Lang Syne. The crowd never fail to join in enthusiastically – so don’t be surprised if your seatmate grabs your hand and encourages you to sing up! 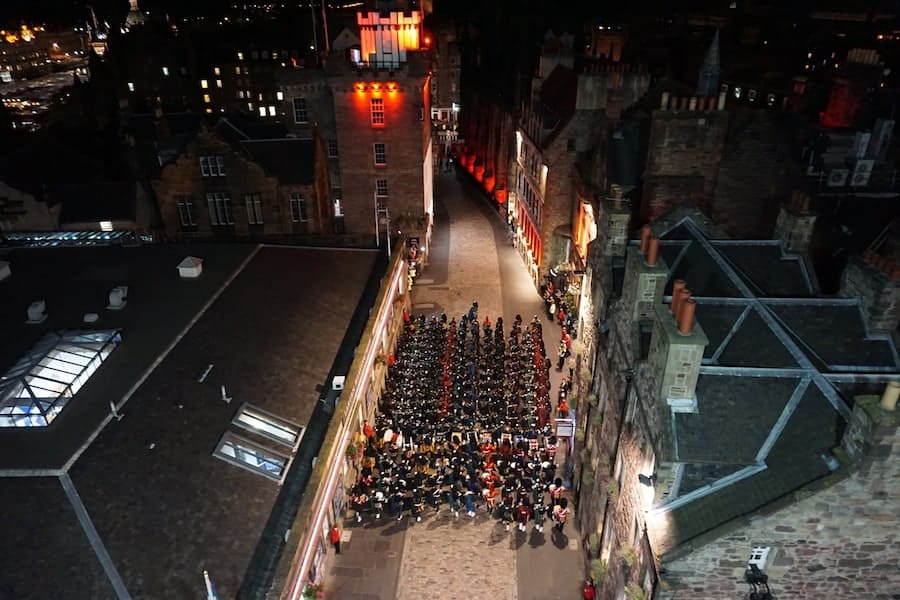 Each night, at the end of the performance, the whole cast of the Tattoo March off the Esplanade and down the very top section of the Royal Mile. Whilst those in the stands don’t get to see this (as all guests are asked to stay in their seats to allow the performers to exit safely), it’s a wonderful sight and a great opportunity for those who were not able to get tickets, to watch a little bit of the show. So if you’re ever on the Royal Mile around 10.30pm during the three weeks in August when the Tattoo is performed, head up the the castle end and watch the parade as the performers exit.

And that’s your lot. I hope this little snapshot of the Tattoo inspires you to book your ticket too see it live at Edinburgh Castle next time you’re in the city in August! 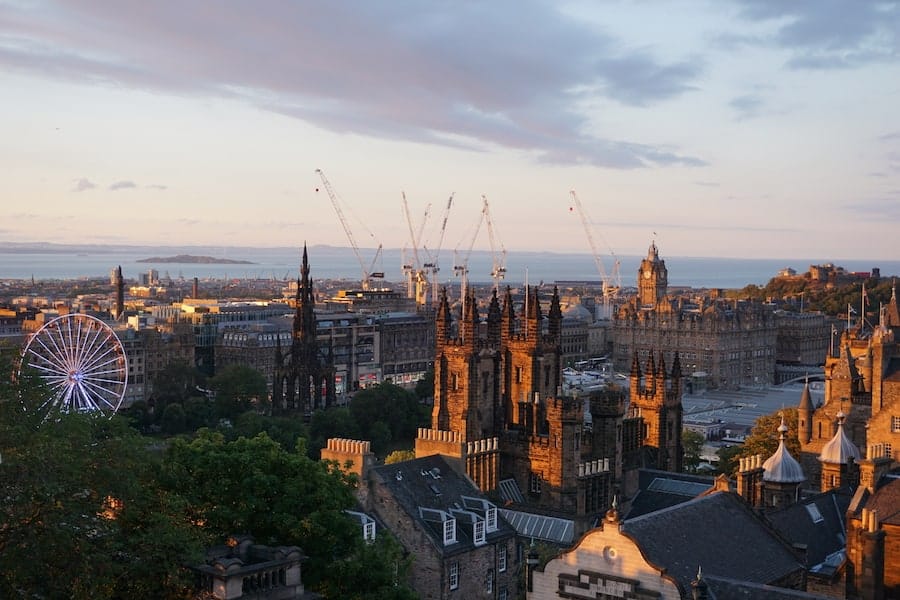 READY FOR MORE EUROPE TRAVEL INSPIRATION? YOU MIGHT BE INTERESTED IN THESE TRAVEL TIPS, TRAVEL HACKS, TRAVEL ARTICLES, TRAVEL DESTINATIONS GUIDES, TRAVELER RESOURCES AND RELATED POSTS ABOUT OTHER BEAUTIFUL CITIES IN EUROPE TO HELP YOU EXPLORE EUROPE AND TRAVEL THE WORLD:

Hi There! Thanks for reading our guide to the Royal Edinburgh Military Tattoo – In Photos. I just wanted to let you know that this post may contain affiliate links, which means if you purchase something after clicking a link, I may get a small commission – which is at absolutely no cost to you. If you enjoyed this article and are going to be searching for some of the things I mention anyway, I would love it if you could click through from the links above & thank you in advance! Read my full Disclosure here. Thank you for reading the MakeTimeToSeeTheWorld Travel Blog.