Kenya’s Maasai Mara National Reserve is easily one of my favorite ‘Game Parks’ in East Africa – or maybe even in the whole of Africa in its entirety. The sweeping savannahs, the acacia trees, the hot air balloons, the herds of animals and the sheer variety of species within the park was simply incredible. It was everything I had ever wanted from an African safari – and so much more. And although I had been to Africa before (remember my Southern Africa Safari in 2016?) I hadn’t seen those Lion King-esque landscapes and when I did, it made my heart sing and ticked off a major travel goal.

Over 3 days we did an afternoon/evening game drive, a full day game drive and a morning game drive and saw a multitude of safari animals including giraffes, elephants, lions, cheetahs, hyenas, zebra, hippos, ostrich, various other animals and more herds of various antelope than you could shake a stick at (but just one singular wildebeest who seemed to have missed the Great Migration memo and had decided to hold down the fort in the absence of the herd).

Obviously, I was a little bit clicker happy on the whole photography front, and very pleased with myself that I had invested in the New Sony 70-350mm F4.5-6.3 G OSS Supertelephoto lens (it was released in Nov 2019 and is the longest zoom lens available from the APS-C crop sensor lens that is found on Sony Alpha range – which meant I could give my old Sony A6000 a decent outing. Although, if I’m honest, next time I go to Africa, I’m still gonna need a little more zoom!)

And so this very self-indulgent post is a collection of my favorite 25 images from the Maasai Mara National Reserve. There are obviously angles and shots that I missed – purely because of the fact I was simply enjoying watching what was in front of me with my own eyes and not through the lens. But they bring me joy, and I hope that they can provide a small insight into this incredible National Reserve to those who may never have the opportunity to see it for themselves.

And, because I’m good like that, I’ve also included a little bit of info about the Maasai Reserve and planning a trip there in case you get that Africa inspired wanderlusty feeling while reading this post! 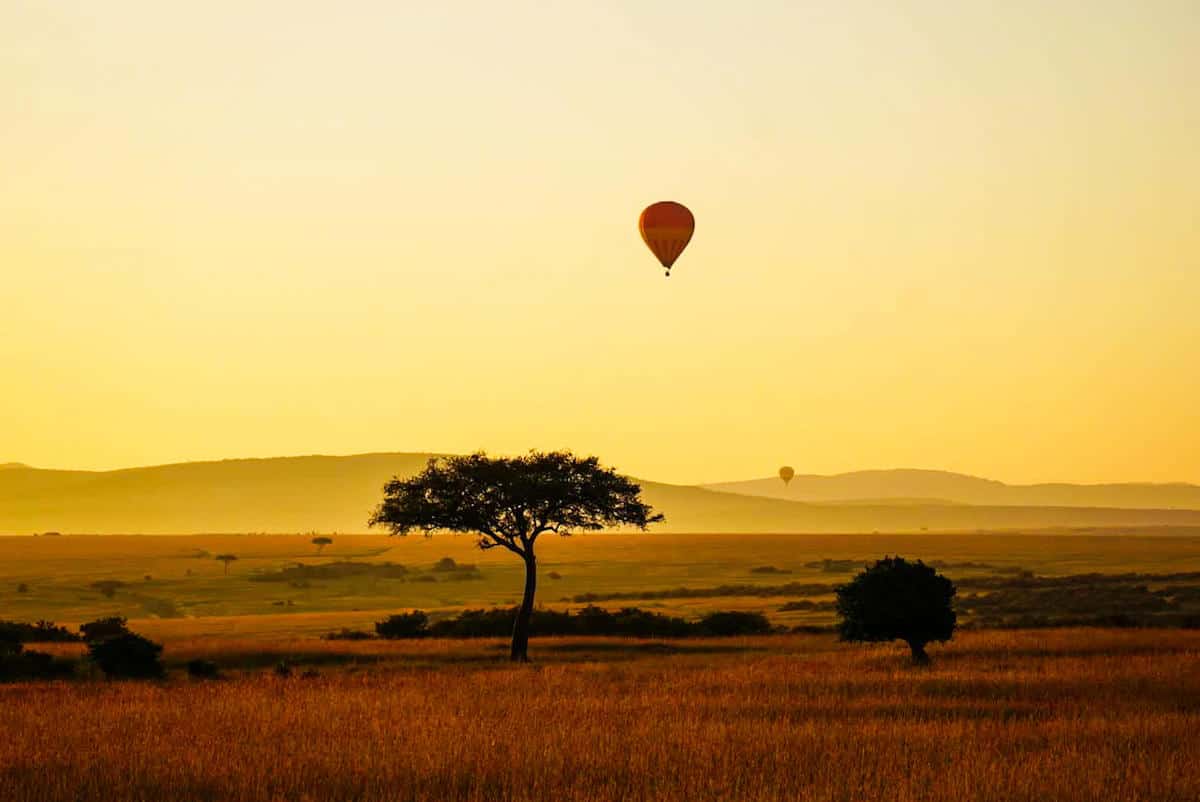 Disclaimer: Almost all posts on this site contain Affiliate links, and this one about the Maasai Mara National Reserve is no different. This means that if you click on any of the links in this post (and make a purchase) I may receive a small commission at absolutely no cost to you. Each post is carefully crafted to (hopefully!) answer all your questions and recommendations are made where we believe they will improve your trip and help with your planning. As such we thank you in advance should you decide to click & buy. Read my full Disclosure here.

Maasai Mara National Reserve: What to Know Before You Go

The Best Time To Visit the Masai Mara National Reserve

Planning your Trip: Best Maasai Mara Safaris (for every budget)

With almost 300,000 tourists visiting the Maasai Mara each year, you can be sure there are lots of options when it comes to arranging your trip. Most tours to The Mara (that include the National Reserve and no other parks) typically last 3-5 days, include multiple game drives and include round trip accommodation from Nairobi and come with a broad spectrum of accommodation options, from camping through to luxury lodges. Our top picks are:

RELATED POSTS – Can’t wait to get to Africa? Have a read of some of our favorite Africa content:
– What to Pack for an African Safari (+ what NOT to Bring)
– 30 Amazing African Adventures for your Africa Bucket List
– The 25 BEST Places to Visit in Africa (with photos & things to do!)
– Make the Most of Your Time in Kenya’s capital with our Top 25+ Things to do in Nairobi
– Get your adventure on: Incredible Things to do in Victoria Falls 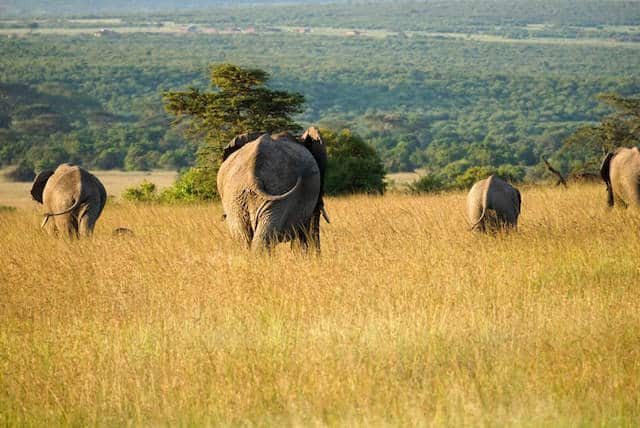 Seriously, how cute are elephant butts?! 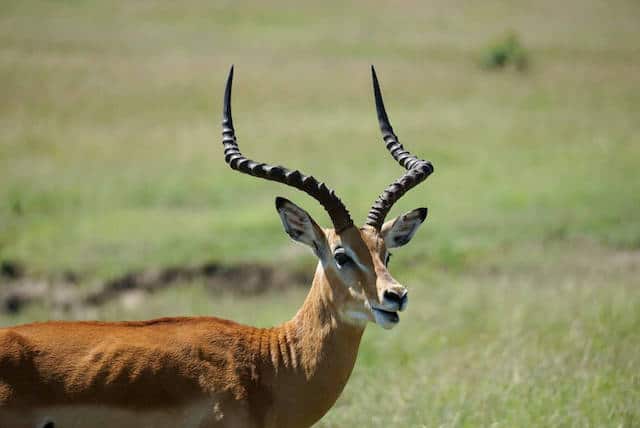 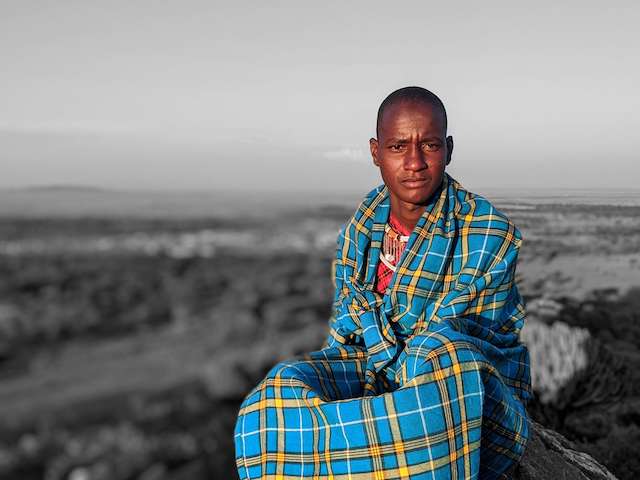 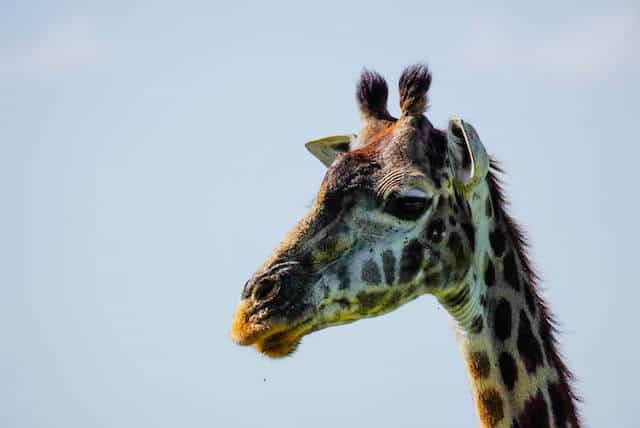 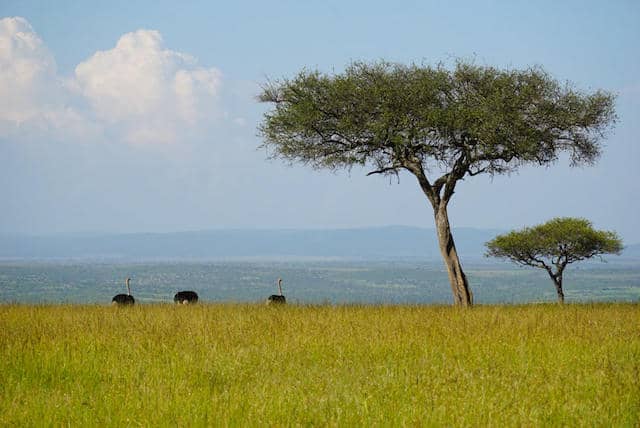 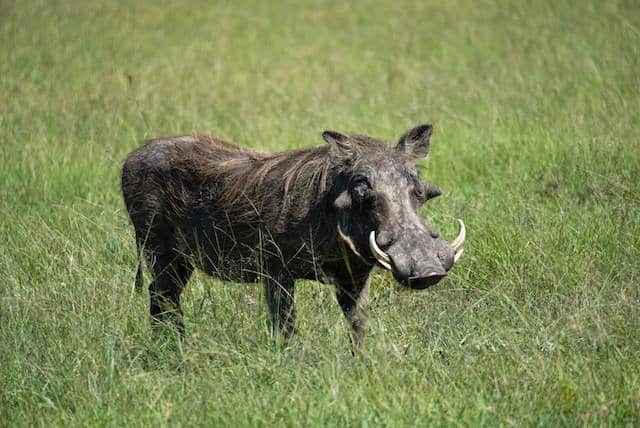 Hey Pumba! Warthogs were abundant in the Maasai Mara – and there were tons of warthog babies. But did you know that Pumba means ‘stupid’ in Swahili? Pumbaa literally translates to absentminded, foolish, ignorant, lazy and stupid – and the guides in the park take great pleasure in telling visitors how they can be running away from a predator then just stop, because they forgot why they were running!

EXPLORE AFRICA FROM YOUR ARMCHAIR:
– 30 Movies About Africa to Inspire You to Visit the Continent
– A Photo Tour of Etosha National Park 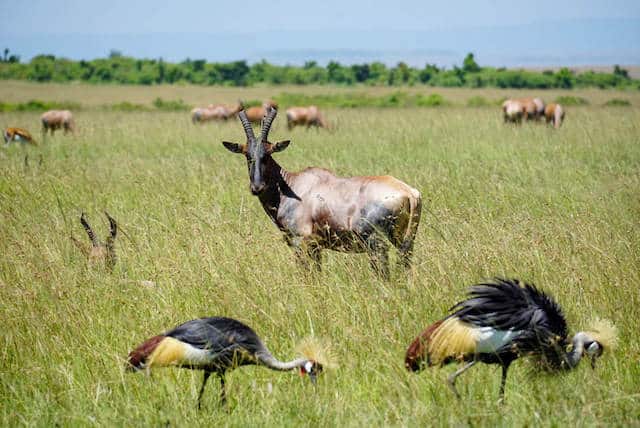 A mated pair of Crowned Cranes and multiple Topi antelope 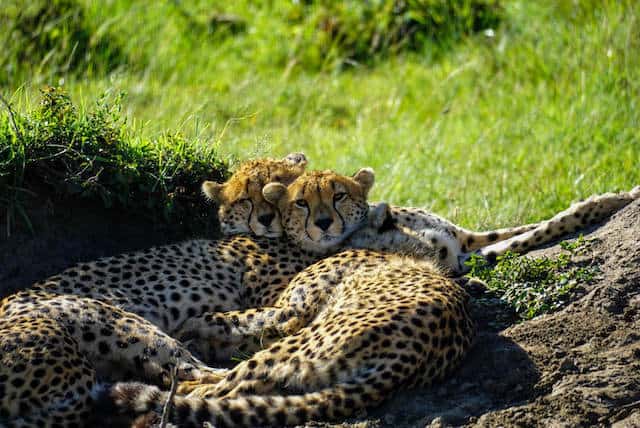 Cheetah cuddles.. there was a Mumma cheetah and her 4 boys just lounging on these rocks when we found them. 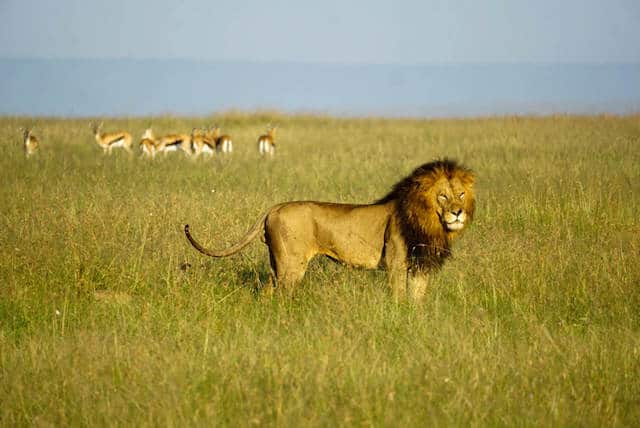 Male Lion standing proudly looking out over the Savannah – this was actually taken post-sex (when mating lions copulate multiple times over a period of a couple of hours). The female lioness was off to the right, and probably the reason the antelope behind felt so safe(!) 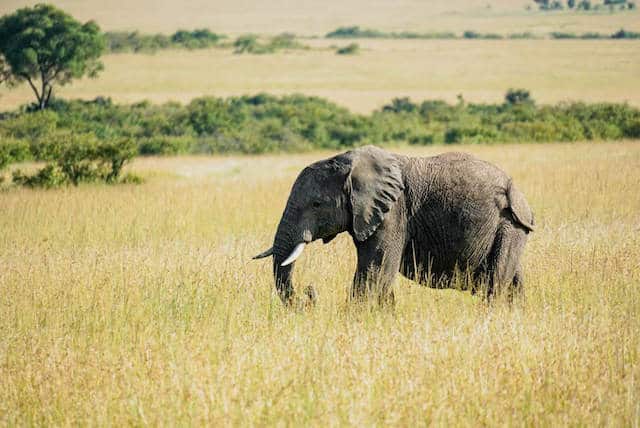 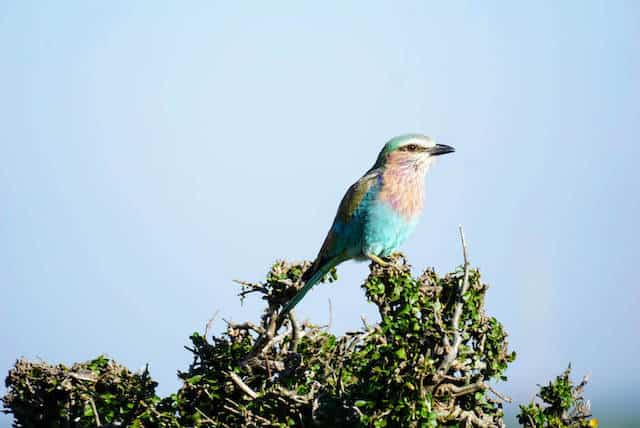 This is a lilac-breasted roller, and for reasons of a personal nature, I never want to hear its name said out loud ever again. But it sure is pretty. 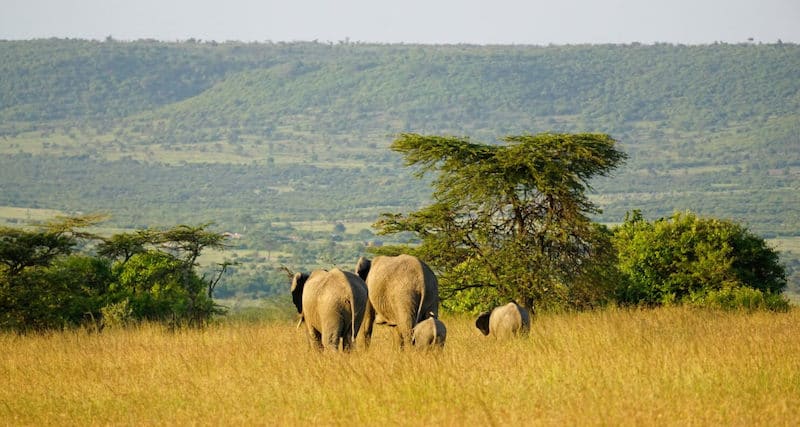 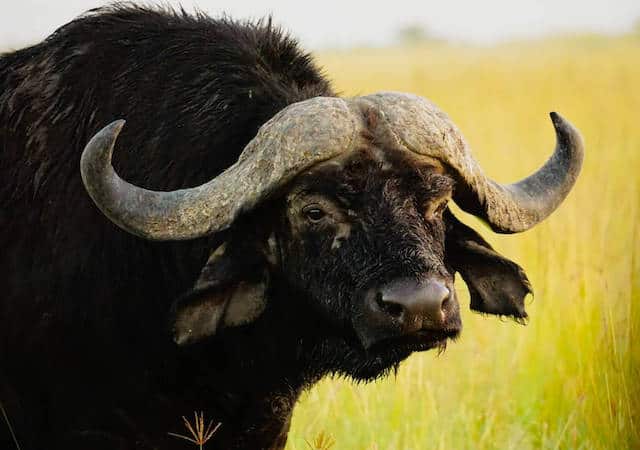 Not the most handsome of creatures, the Cape Buffalo can be extremely dangerous and is said to have killed more big game hunters than any other animal in Africa (which I don’t really have a problem with to be honest!) 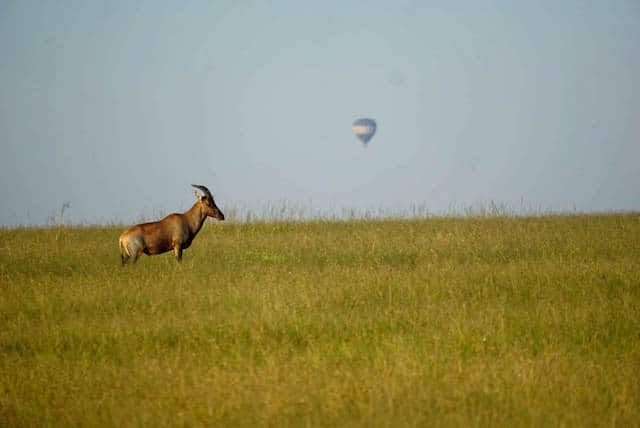 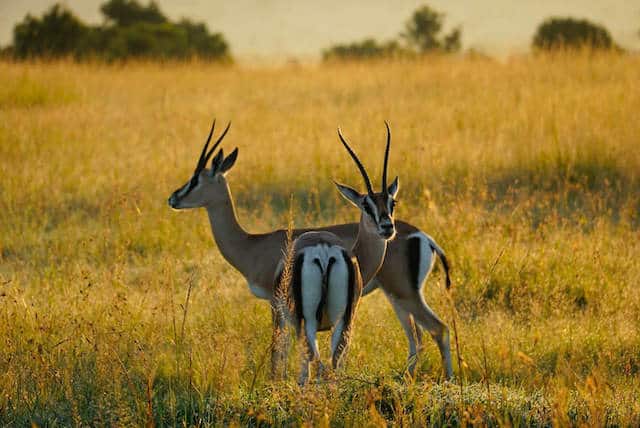 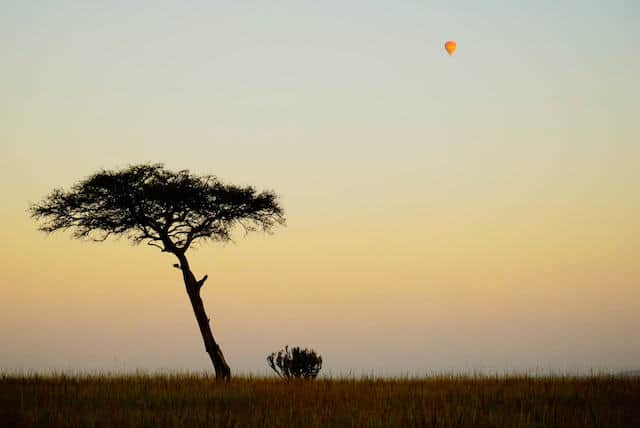 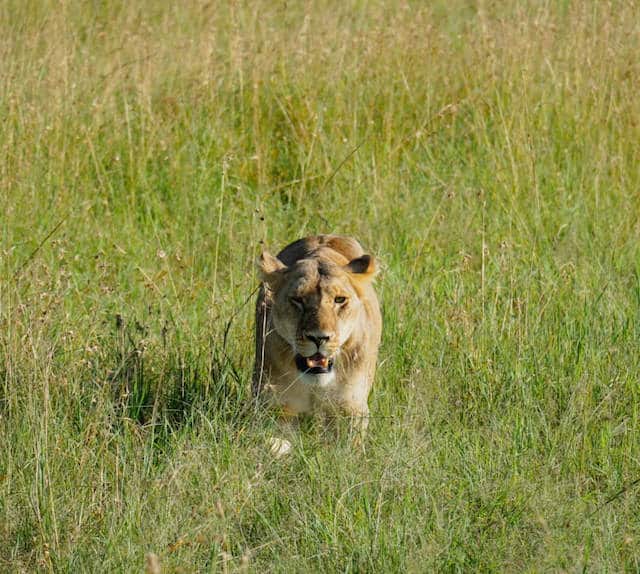 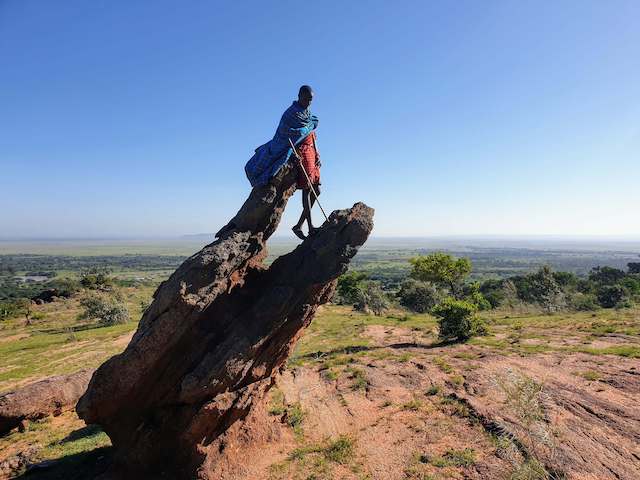 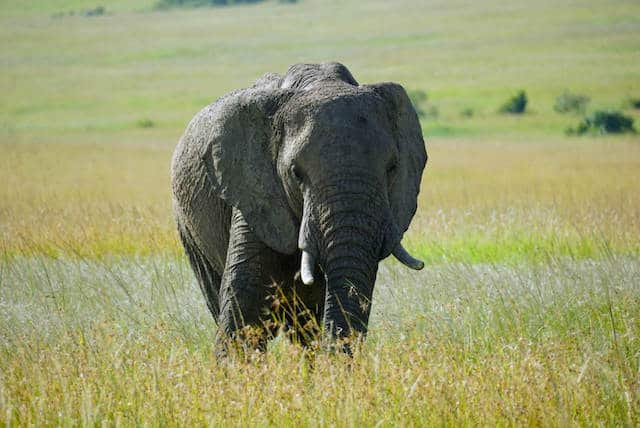 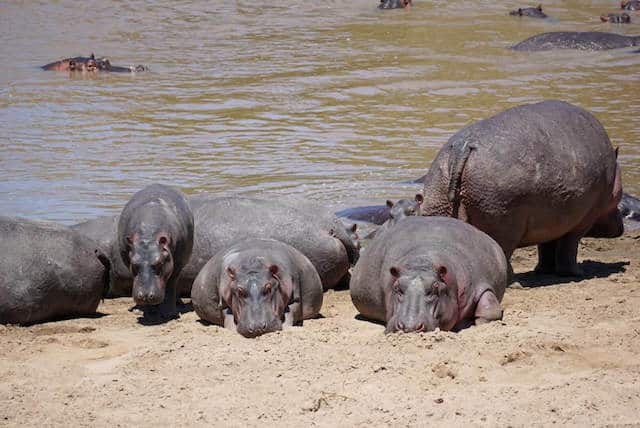 Considered one of the most dangerous animals in Africa, the hippopotamus can snap a crocodile in half in a single bite! 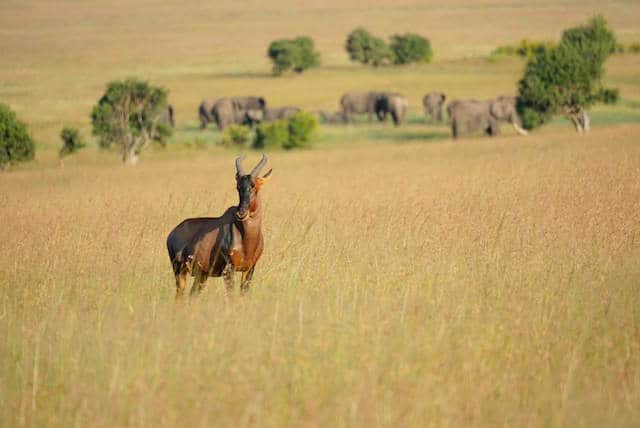 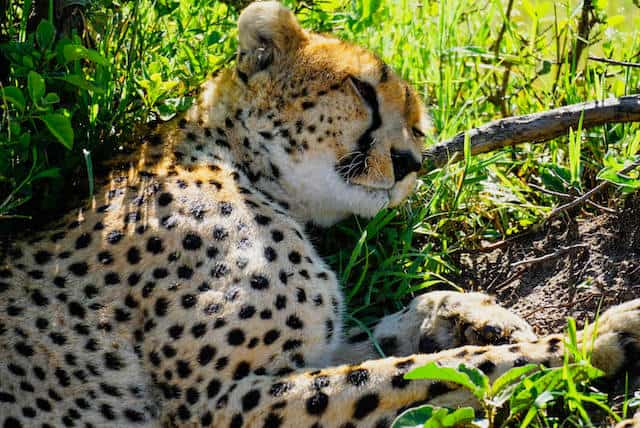 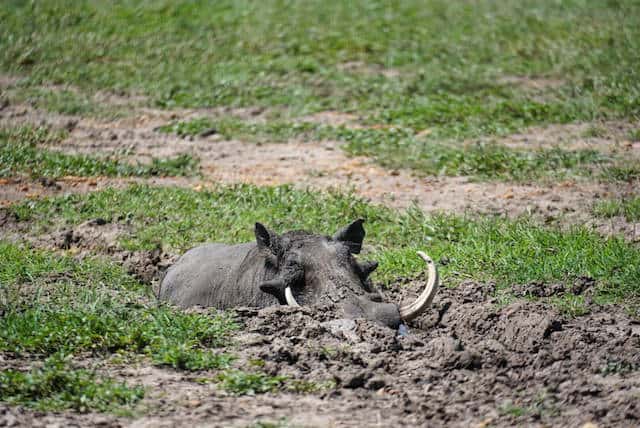 You’ve heard of a pig in s**t, but have you heard of a warthog in mud?!

And that’s a wrap! I hope you enjoyed this virtual tour of Kenya’s Maasai Mara National Reserve – I certainly enjoyed a trip down memory lane putting it together. And if you know of anyone who is planning a trip to The Mara, or who has already been and would love to revisit their trip, please share this post with them on Facebook, Twitter, Flipboard or Pinterest. 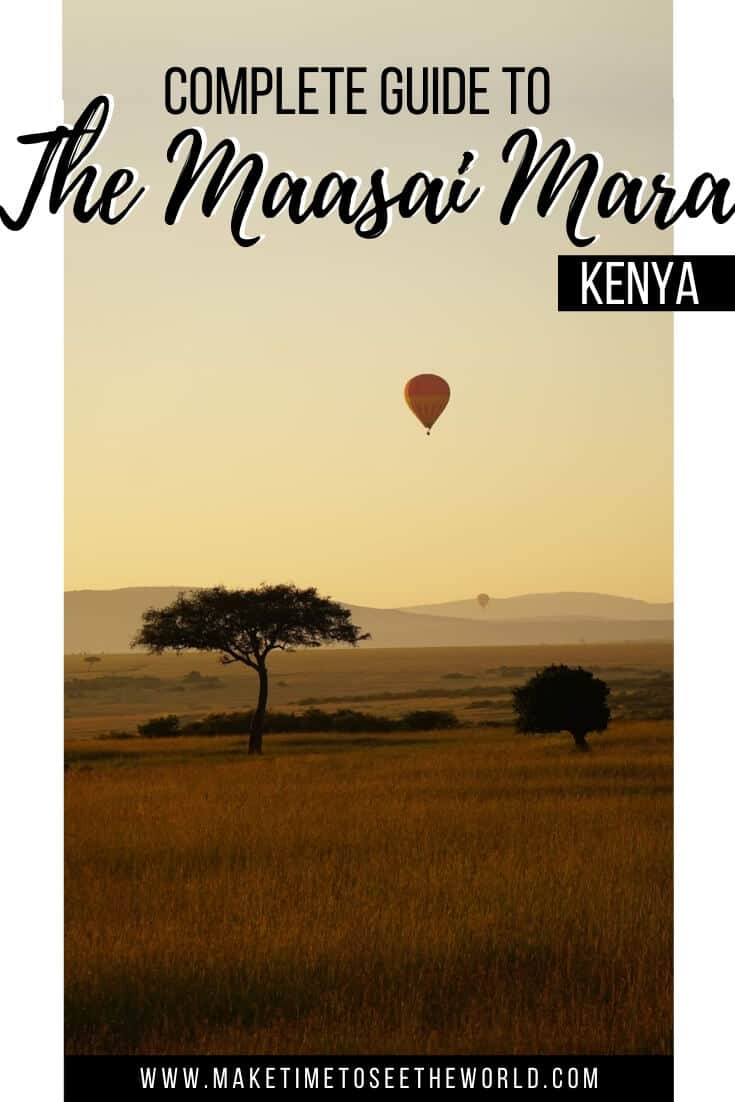 And if you liked this photo guide to the Maasai, Mara National Reserve in Kenya take a look at the other Africa related content, recent posts, travel resources, travel guides, destination guides, ultimate guides and packing lists:

Hi There! Thanks for reading my travel tips and photo guide to The Maasai Mara National Reserve in Kenya  –  I just wanted to let you know that this post contains affiliate links, which means if you purchase something after clicking a link, I may get a small commission – which is at absolutely no cost to you. If you enjoyed this article and are going to be searching for some of the things I mention anyway, I would love it if you could click through from the links above & thank you in advance! Read my full Disclosure here.

And Thank you for reading the MakeTimeToSeeTheWorld travel blog posts.

Some beautiful shots. The animals all look so chilled!

Thanks so much Jan! And they really were chilled. We saw one cheetah stalking a couple of antelope, but they scattered when she made a half-ass attempt at catching them. It was riveting to watch, but she mustn't have been all that hungry as she didn't seem at all bothered when she didn't catch one!