Florence & Pisa are two of Italy’s much loved tourist hubs – and as they are only separated by a 1 hour train journey, they are easily combined in a two city break. Read on to find out all about the what to do in Pisa  and top things to do in Florence on a weekend break!

During these unprecedented times, we urge you not to travel until it is safe and advise that our general travel guides are for future planning & inspiration only - although we are very greatful for you clicking around! And to help ease the wanderlust we've got 17 Ways to 'Travel' from Home, 40 TOP Travel Movies to Fuel Your Wanderlust, 30 Best Travel Books and 75 Live Streams & Virtual Tours Around the World to let you explore from your couch! 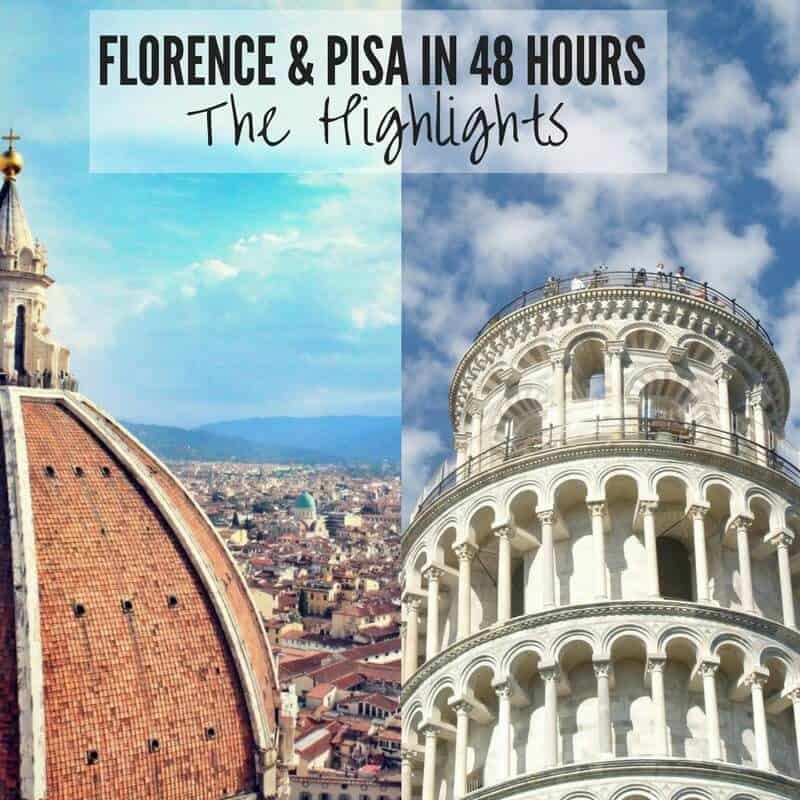 RELATED: These are the eighth & ninth stops on my ‘Europe By Rail in 25 Days‘ Tour. Click the link to find out all about it!

Two city Weekend break in Florence & Pisa:
Things To Do

Florence – the capital of the Tuscan region of Italy – was once a major trade center in Medieval Europe and is credited with being the birthplace of the Renaissance. With multiple museums and breathtaking architecture, it has been voted as one of the most beautiful cities in the world by both Forbes and Conde Nast Traveler.

Pisa on the other hand is famous for its leaning tower and impressive Piazza Del Duomo. The three main buildings can be explored in a couple of hours, and so make it the perfect city to combine with a visit to Florence.

RELATED: Want to read about other cities you can hit in a weekend – and the other stops on this Eurotrip? Read my posts on Amsterdam, Berlin, Prague, Krakow, Budapest, Vienna & Venice to get you started!

The Cathedral di Santa Maria del Fiore – translated as: Saint Mary of the Flowers – is the main church in Florence. The cathedral was begun at the end of the 13th century by Arnolfo di Cambio. The dome, which dominates the exterior, was added in the 15th century on a design of Filippo Brunelleschi. It is the 4th Largest Cathedral in the world (after St Peter’s in Rome, St Paul’s in London & the Doumo in Milan).

The Ponte Vecchio – or Old Bridge – its original construction can be dated back to 995, and was rebuilt in 1345. It was the only bridge that the Nazi’s didn’t destroy in World War II. The bridge is famous for the numerous jewellery shops which are contained inside.

The Basilica di Santa Croce – or The Basilica of the Holy Cross – is the principal Franciscan church in Florence, and a minor basilica of the Roman Catholic Church. It is the burial place of some of the most illustrious Italians, such as Michelangelo, Galileo and Machiavelli. And because of this it is also known as the Temple of the Italian Glories.

The Piazza is conveniently located next to the Ponte Vecchio and is home to two museums. First, the Piazza Vecchio Museum (with the tower you can climb) and second: the open air sculpture museum know as Loggia dei Lanzi. It is in this areas you can find a copy of Michelangelo’s Statue of David, Cellini’s 1554  Perseo holding Medusa’s head and Bandinelli’s Hercules and Cacus Sculpture (above).

RELATED – Two Italian cities in one trip not enough? Why not add 1 day in Milan to your Itinerary?!

No visit to Florence is complete without gazing upon Michelangelo’s magnificent Statue of David. Located in the Galleria dell’Academica, it is important to pre-book your ticket so you don’t waste any of your valuable time waiting in line!

**For those who love Museums, there is also the equally popular Uffizi Gallery located near the Piazza della Signora**

Piazza Michelangelo – the perfect place if If you’re wanting a panoramic view of Florence’s iconic skyline (and don’t want to climb any of the towers!). Located approximately 4km away from the main sights I recommend grabbing a cab/uber to get you there. (If time is not an option for you it is around a 1.5-2 hour walk.) Open daily and free – it’s a stop on your Florence tour that you can’t afford to miss!

**TIP** Plan your visit to coincide with sunset and you will not be disappointed!

RELATED – If you are planning more train journeys, consider getting an EU Rail Pass.

Pisa is best known for it’s Iconic Leaning Tower and to be honest on our visit we didn’t find much more of interest. (Apart from yummy Italian food, loads of Gelato and lots of churches!) This is why it is the perfect city to tag on to your weekend in Florence. The main sights are located in Piazza Del Duomo – also known as Piazza Dei Miracoli –  and comprises The Cathedral, The Baptistry, the Camposanto Monumentale and the Bell Tower. Read on to find out what to do in Pisa on your weekend break!


The Piazza is considered to be central to religious life with the Baptistry representing Birth; The Cathedral (and Leaning Tower) – Life and the Cemetery, death. Surrounded by lush green grass, it is the perfect place to sit and relax as you gaze upon these stunning buildings.

It is also a great place to people watch.. I’m sure you won’t be surprised at the number of people trying to “hold up the tower” in their holiday snaps. It can be really quite entertaining!

Take a wander inside and look for the small cut out in the wall facing the Cathedral. It’s the perfect spot for photographs and lets you come home with a snap no-one else will have! (unless they have read this article ;-) – but shh, its a secret! and definitely one of the top things to see in Pisa!)

The Campanile/Bell Tower – a.k.a The Leaning Tower

Made famous for it’s unintended tilt it has now become one of the most visited sites in Europe. Built in the 11th Century and at 55m high it was a miracle of medieval engineering.

Often overlooked by visitors, The graveyard is an ancient monumental cemetery set on the north side of the Piazza dei Miracoli.  It is a place of quiet tranquility with beautiful fresco’s – a far cry from the people trying to hold up the tower in the main part of the square.

So there you have it – the perfect way to see two Italian cities in one weekend!

Have I inspired you to take a two city weekend break? I hope so!
And if you like it – don’t forget to pin it for later!

Vicki is the Lawyer turned Content Creator, Editor-in-Chief and all round Boss Lady at MakeTimeToSeeTheWorld. She has lived and worked in 7 different countries and started the site to show everyone that it is possible to travel whilst holding down a full time job (because not everyone can - or wants to - quit and walk away from it all). Her style of travel has always been to get the best out of a destination as a time poor traveler making the most of limited vacation days and all without breaking the bank; BUT she does know where to save and where to splurge to have the most incredible travel experiences - such as luxury hotels and over-water bungalows, safaris, spas and more(!) - where the situation calls for it. If you want to join the work to travel revolution, follow MakeTimeToSeeTheWorld on Facebook, Twitter, Pinterest or Instagram - and if you are a travel brand who would like to find out how to work with Vicki, contact her here.