The Masada Snake Path is one of the most iconic hikes in Israel and one that is steeped in history.

Located in Masada National Park it is around 90 minutes South-East of Jerusalem, overlooking at the Dead Sea and on the other side of which is the border with Jordan.

The desert fortress that once stood at the top of the peak was built by King Herod, conquered by Jewish zealots and was the location of their last stand against the Roman rule between 70-73 AD which ended in a bloody final siege.

The ruins of the former fortress sprawl across the flat top of Mount Masada and are one of the most important archeological sites in Israel. 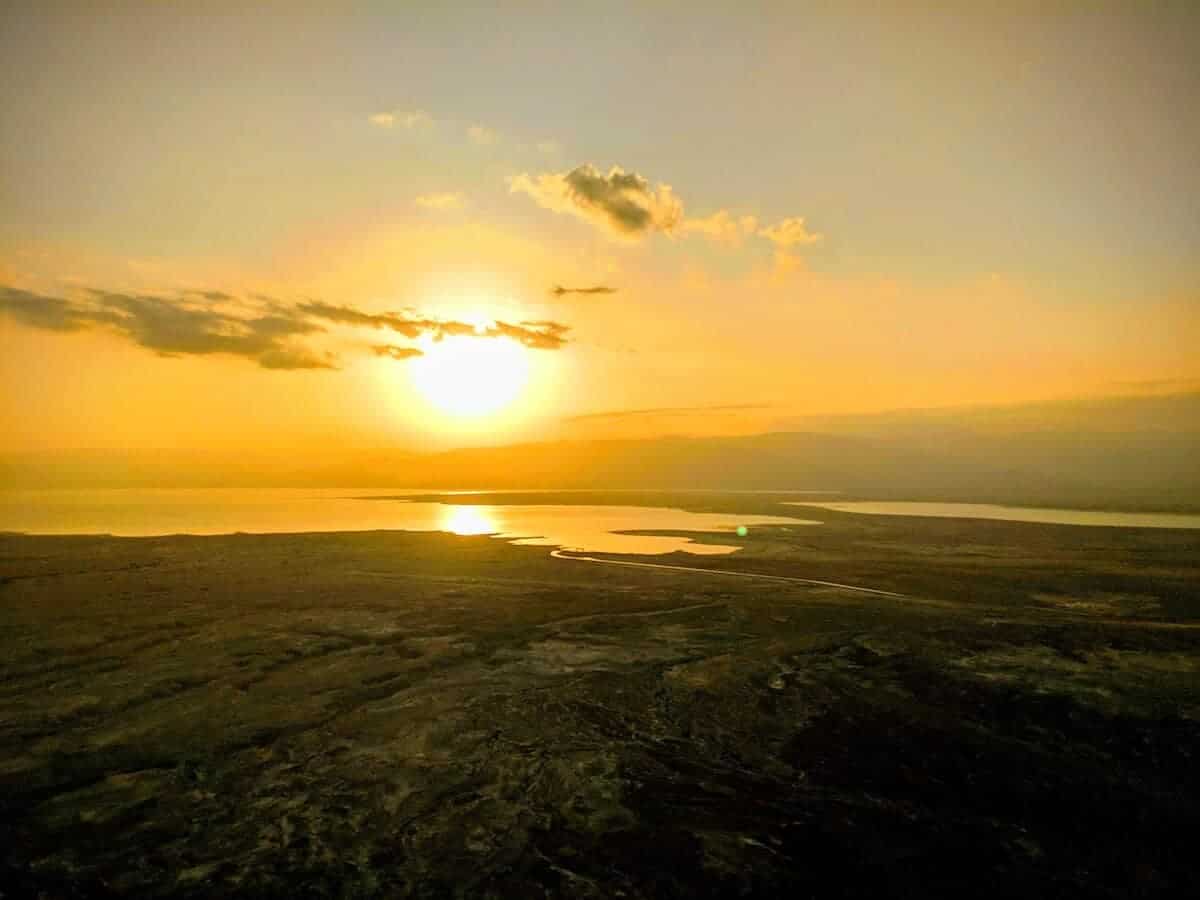 Disclaimer: I hiked the Masada Snake Path at Sunrise when I was hosted by Abraham Hostels on one of their fabulous Abraham Tours, (and as part of my Tour of Israel and Jordan) however all opinions, sweat lost, profanities uttered, undignified steps are taken and images captured remain my own.

3 Ways to the Top of Mount Masada 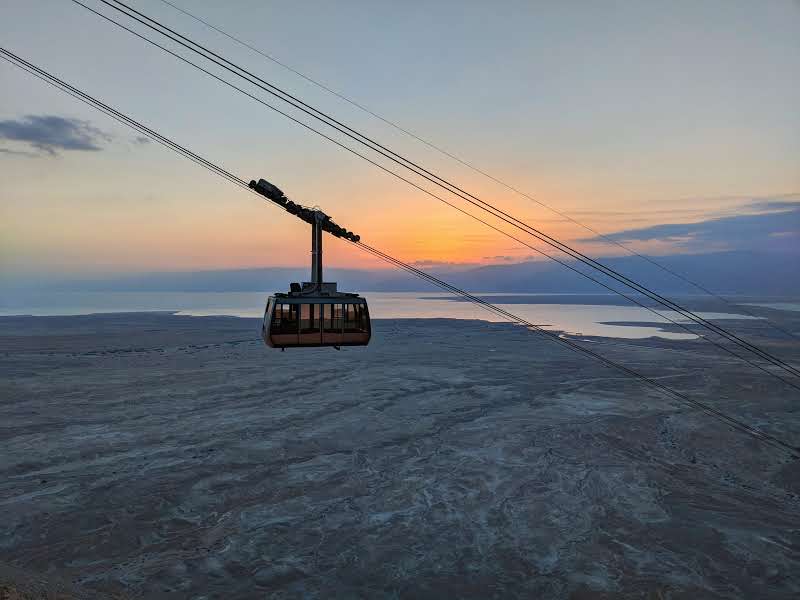 RELATED: Read our Top Hiking Tips for Beginners or if you’re feeling inspired – our complete guide to Hiking New Zealand.

In all likelihood, you’ll be heading to Masada for sunrise either from Tel Aviv or Jerusalem. In the summer months pick up will be at 3am from Jerusalem or 2am from Tel Aviv (I know it’s really early), and in winter it will be 1 hour later (4 am – Jerusalem/3 am Tel Aviv).

You’ll then be driven the 90 minutes (inc. a 15-minute coffee/rest/pee stop) southeast into the Dead Sea region and to the Western gate of Masada National Park and the base of Mount Masada.

The roads along the way are relatively smooth, so it may be worth trying to nap along the way if you are the kind of person that can sleep anywhere. (I, unfortunately, am not one of those people) 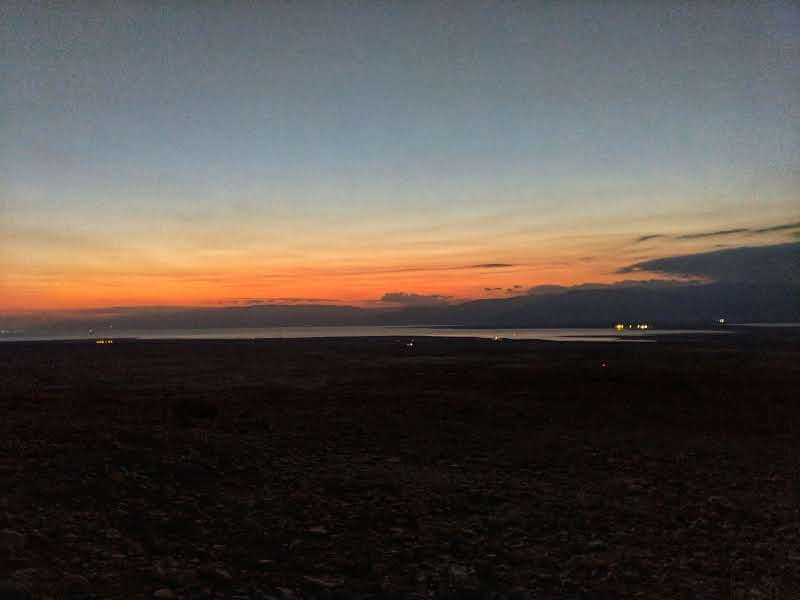 What You Need for The Climb

You’ll arrive at the entry gate of Masada National Park between 4.45 and 5 am, with the park officially opening 1 hour before sunrise for those who want to climb – although we were there slightly before and were able to gain entry (I started climbing at 5.50am).

The gate – and the start of the Snake Path – is located approximately 400m below sea level, and the Masada Mountain stands at 450m high. T

his makes the climb about 850m straight up, but the elevation at the top is only 58m above sea level. 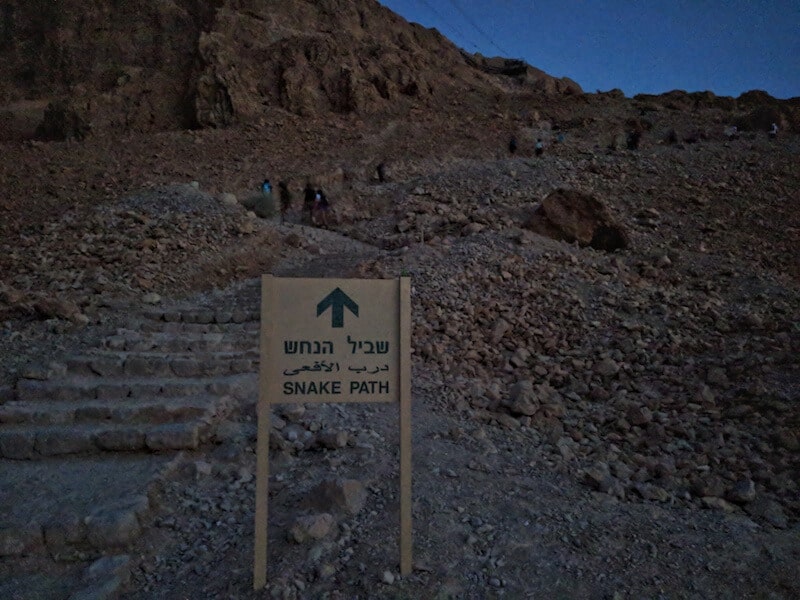 It will still be dark, but not so dark that you cannot see or require a headtorch, and that darkness quickly dissipates as you start to climb as the sun’s rays start to reflect off the sky.

If climbing in summer, the temperature will likely be above 20°C/68°F when you start the climb and be closer to 25-28°C when you reach the top, rising to 30°C on the walk back down.

Winter temperatures are around 10°C lower, and we recommend having a jumper handy for watching the sunrise at the top as the wind can be quite chilly. 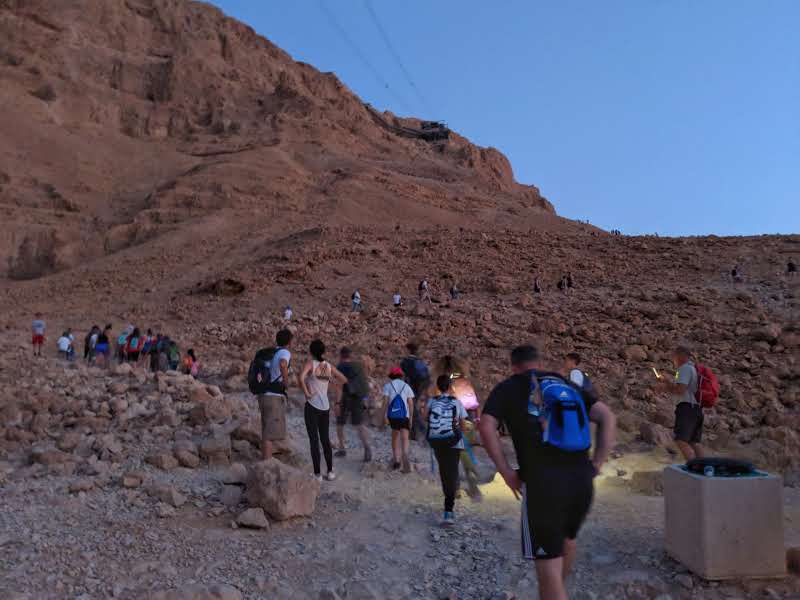 The path itself is a combination of hard dirt, some loose rocks and 700 stone steps of varying sizes; it covers a distance of around 2km with its multitude of switchbacks along the winding path that cut across the side of the mountain, and are the characteristics that give Snake Path its name.

Whilst the path is on an incline (otherwise how would you get to the top?!) it is not particularly severe (and nothing like the hikes in and around Indonesia’s Komodo National Park) with the majority of the height gained at the steps on the corners of each switchback.

These steps provide a great spot for breaks and have handrails that you can prop yourself upon if you don’t want to sit on the dusty rocks. 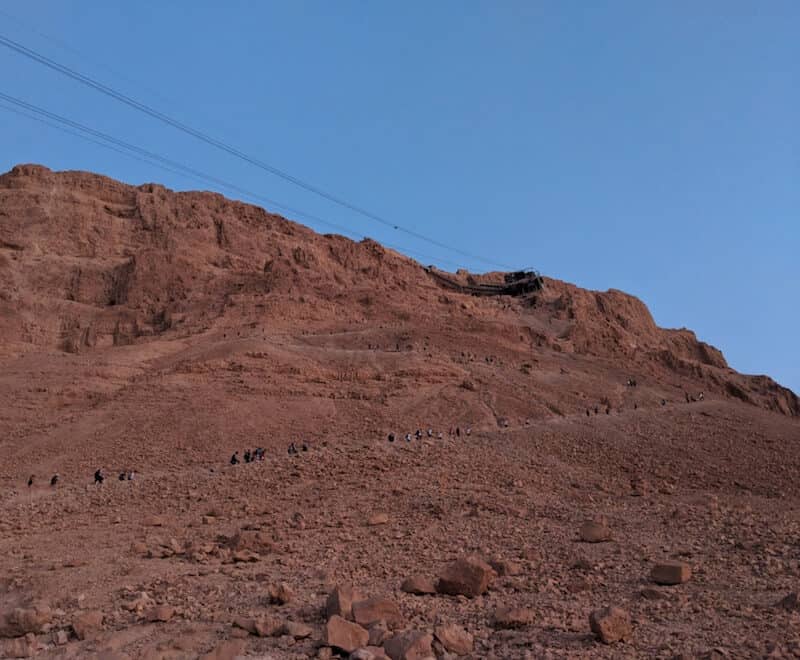 There will be lots of people hiking Snake Path at the same time, and you may find yourself in and out of different groups, but the only pressure will be on yourself to get to the top for sunrise.

I am very much a non-hiker. (Remember that time in Africa, I was literally dragged the practically vertical 100m+ out of Batoka Gorge after white-water rafting the Zambezi River?!) It’s not my jam, I need regular breaks, I am a little unfit and have a very slow and steady mentality.

It took me exactly 1 hour to get to the top. If you are even less of a hiker than me, give yourself 90 minutes and reduce the stress of thinking you might not make it to the top for sunrise.

RELATED – Curious what to expect when traveling in Israel? Here’s everything you need to know before you go!

At The Top of Masada’s Snake Path: What Was the Masada Fortress? 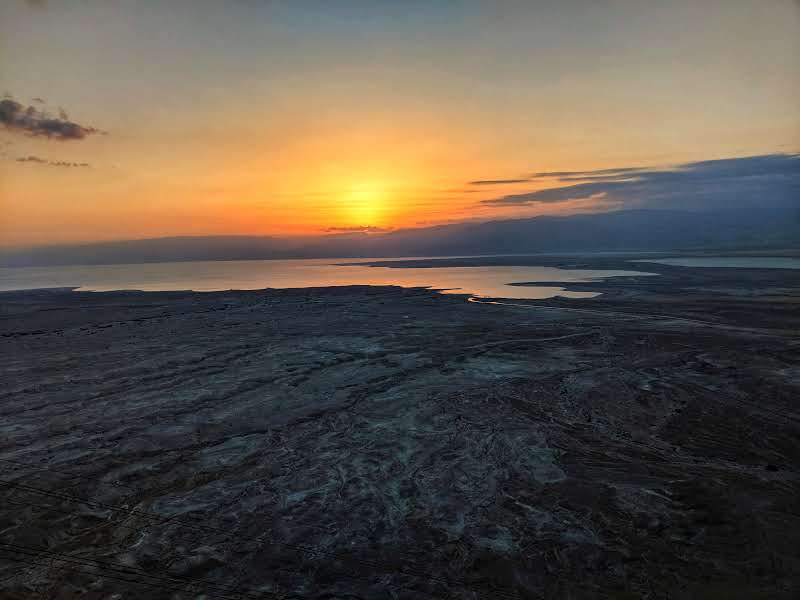 Congrats! You’ve made it to the top of the Masada Snake Path for Sunrise! Grab a spot facing the Dead Sea and watch that yellow ball of light rise high into the sky. It’s a pretty epic sight.

Once you’ve got your fill of the Sunrise, take a walk around the ruins of this magnificent ancient fortress.

There are (apparently) maps available for self-guided tours (I wasn’t offered one at the entrance gate nor did I see anyone at the top handing them out) but there are plaques next to most of the ruins which indicate what used to stand there, and Abraham Tours have a handy app which contains a guide to the site which you can download and use offline as you wander around.

Declared a UNESCO World Heritage Site in 2001, the Fortress at Masada was built by King Herod between 37-4 BC at which time the complex featured the Western Palace, Northern Palace, Storerooms, Synagogue, Church, Bathhouses, Cisterns and lots of other structures.

It is evocative of life in 1st Century Roman Judea and is a site of religious and cultural importance for modern-day Jews who view it as a symbol of the struggle they have faced in trying to secure their own land. 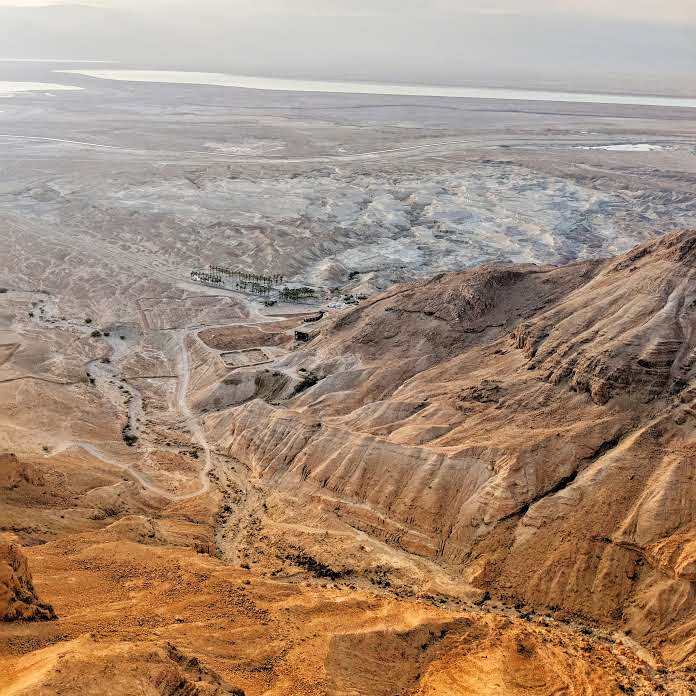 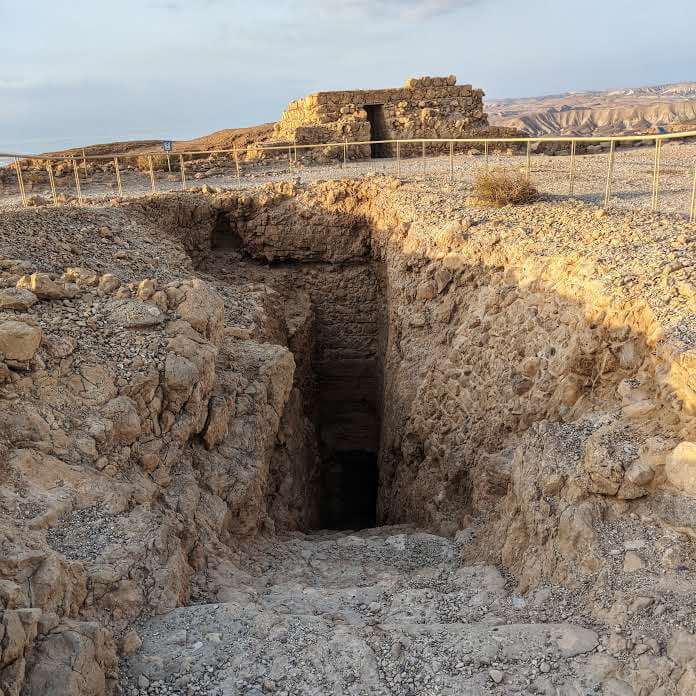 Climbing Back Down Snake Path 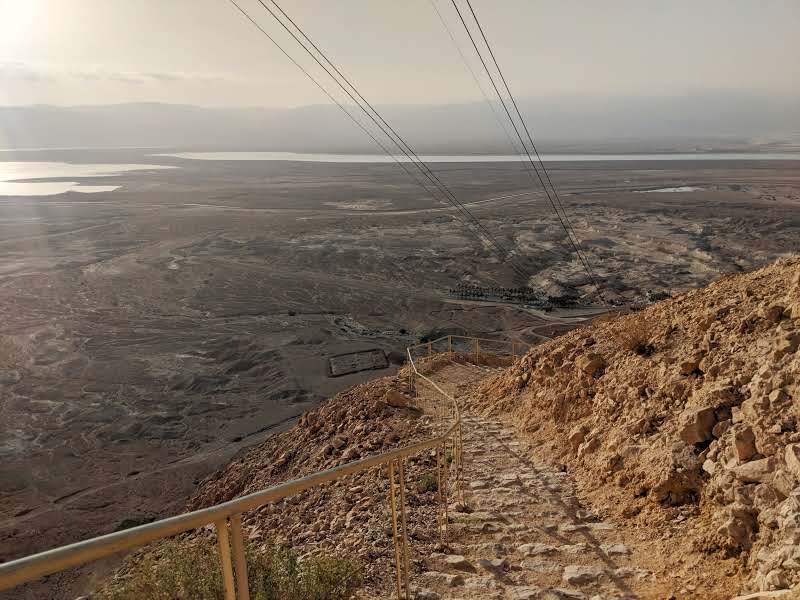 Most tours allow around 3 hours total at the site, and I would suggest setting off back down with an hour to spare. The sun will be high in the sky and the temperature will be significantly higher.

Make sure you top up your water prior to the descent and don’t feel bad if you need as many breaks on the way down as you did on the way up! (I didn’t and it took me 50 minutes to get back down to the waiting and air-conditioned mini-van) 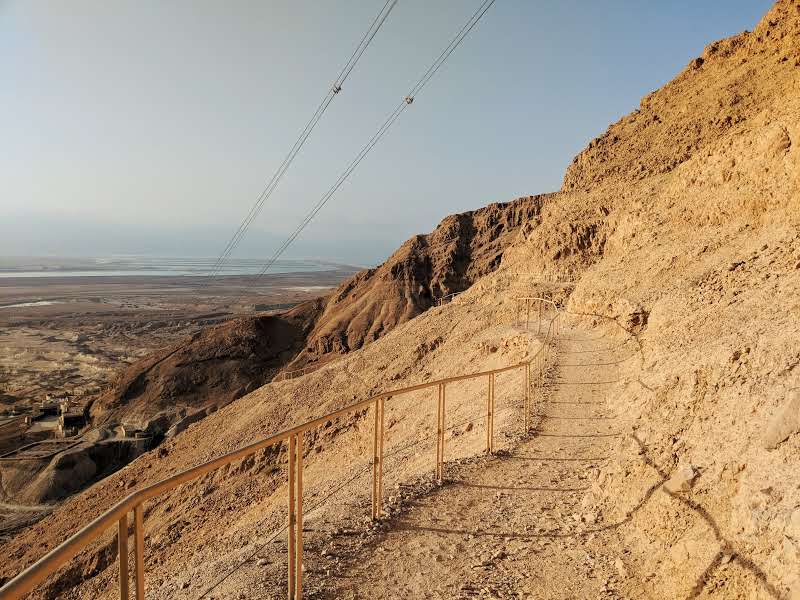 For the non-hikers among you, you may encounter a feeling of ‘jelly legs’ as you are traversing the stairs and switchbacks down the path – and which in my case progressed to full-on shakes when I eventually sat down! – and this is where those cookies I mentioned earlier would really come in handy for a sugar hit – particularly if you are moving onto Ein Gedi and the Dead Sea on your day tour.

Is Hiking the Masada Snake Path at Sunrise Worth It?

Absolutely. Even as a non-hiker. Just look at that Sunrise at Masada – it’s the perfect reward for your early morning hike up Snake Path.

So there you have it – hopefully, we have inspired you to hike Masada Snake Path at sunrise via the Snake Path (or simply show you the best ways for visiting  Masada if you don’t want to hike) & given you a brief history of Masada along with general hiking/travel tips to help make the climb as straight-forward and simple as possible. 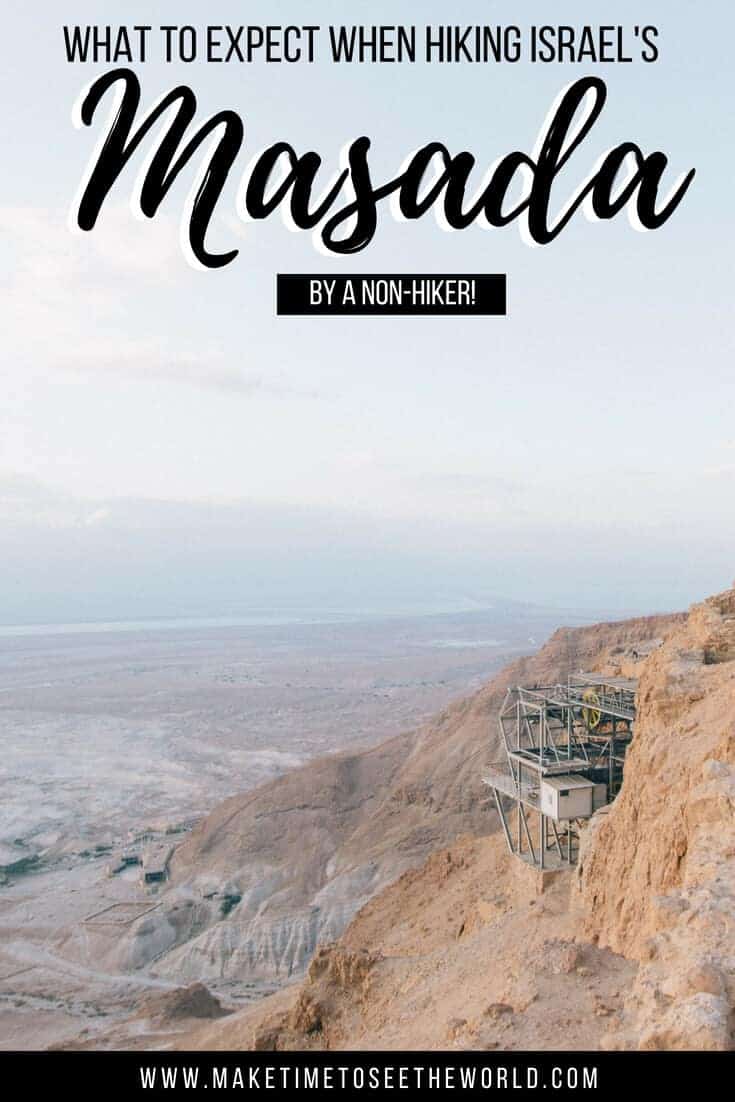 Hi There! Thanks for reading our travel guide to Hiking Masada Snake Path for Sunrise (by a Non-Hiker)! I just wanted to let you know that this post may contain affiliate links, which means if you purchase something after clicking a link, I may get a small commission – which is at absolutely no cost to you. If you enjoyed this article and are going to be searching for some of the things I mention anyway, I would love it if you could click through from the links above & thank you in advance! Read my full Disclosure here. Thank you for reading the MakeTimeToSeeTheWorld Travel Blog.

thanks for the very useful guide. Going to Israel in a month and can't wait for it. Thinking of hiking the snake path. Are there toilets at the top that are open after 8am or even before?

Hi Anka I believe there are toilets at the top, but I am unsure what time they open unfortunately, and may change with park opening hours (summer/winter are different) Hope you have a great time though!

Nice article! Would it be possible to just rent a car in Jerusalem and go without a tour? Would you recommend that option?

Hi Daniel I'm sure it is possible to rent a car in Jerusalem and drive yourself, but as it is something I haven't done I'm afraid I don't have any advice or insight. But apart from that, you'd just have to pay the entrance fee at the bottom and hike up with everyone else.

Wow, looks great, particularly the end. I had been looking for that subject for a couple of days across the nest, however there was nothing valuable. So happy to attain your post in the conclusion. I am excited about this theme, and I want to be constantly aware of the most recent news.

That's a joy to read your post and eventually clarify myself.

Thank you for your article. Hunting accurate information is one of the biggest issues for the younger generation.