For thousands of years, the tradition of communal bathing in Japan has been considered a healthy and relaxing bonding experience. To briefly explain, an onsen is a hot spring and thanks to Japan’s volcanic activity you will find them right across the country, and their accessibility is one of the reasons for such entrenched Onsen Culture throughout Japan. It’s the health benefits of the waters mineral content that make onsen so therapeutic and also the reason people bathe nude in them.

Although it might not sound like everyone’s cup of tea, for anyone visiting Japan we highly recommend this top Japanese cultural experience.

For the lowdown on everything there is to know about how to onsen in Japan, our guide is your no.1 place to start. 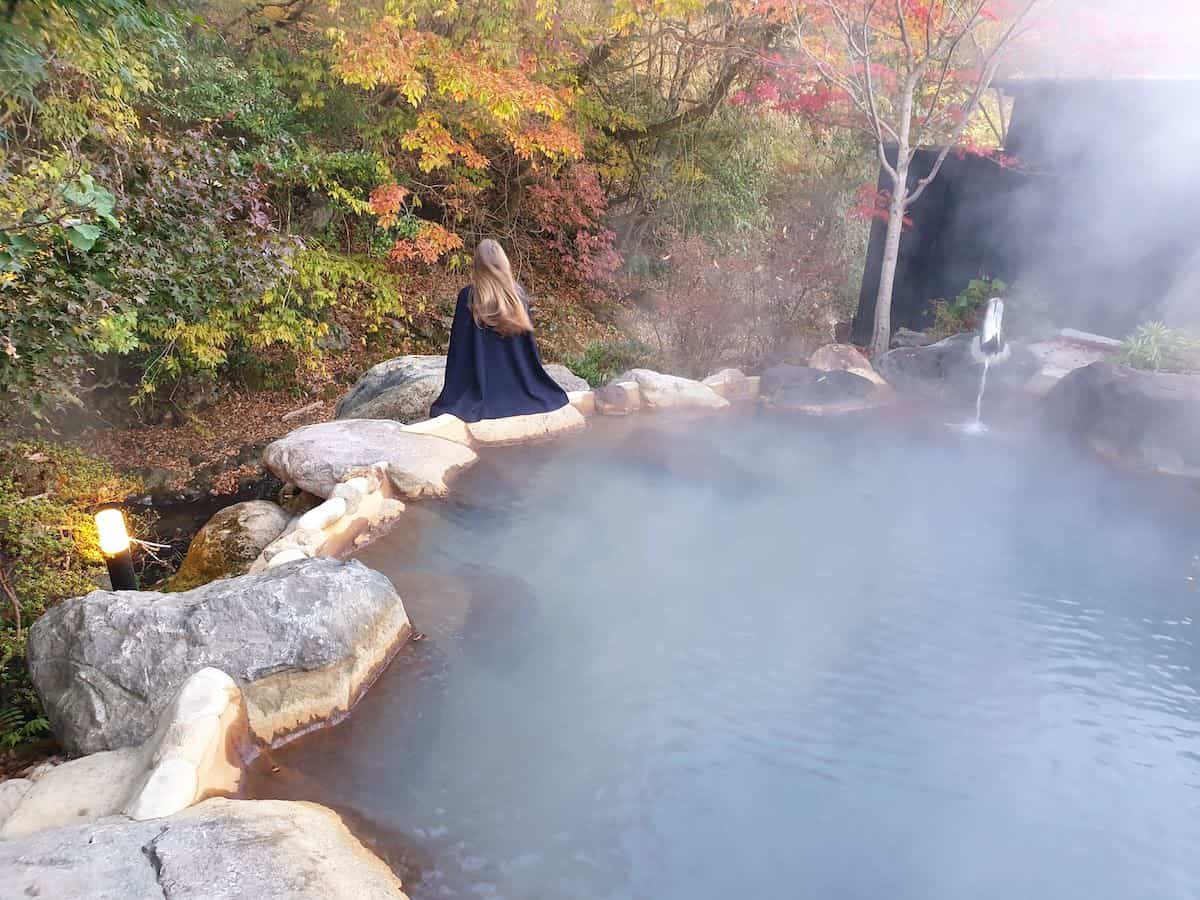 Disclaimer: Kyushu Tourism sponsored my trip to the region, however, all opinions remain my own. Additionally, almost all posts on this site contain Affiliate links, and this one about Japanese Onsen Culture & How to Onsen in Japan is no different. This means that if you click on any of the links in this post (and make a purchase) I may receive a small commission at absolutely no cost to you. Each post is carefully crafted to (hopefully!) answer all your questions and recommendations are made where we believe they will improve your trip and help with your planning. As such we thank you in advance should you decide to click & buy. Read my full Disclosure here.

What is Onsen in Japan: A short history of Japanese Hot Springs 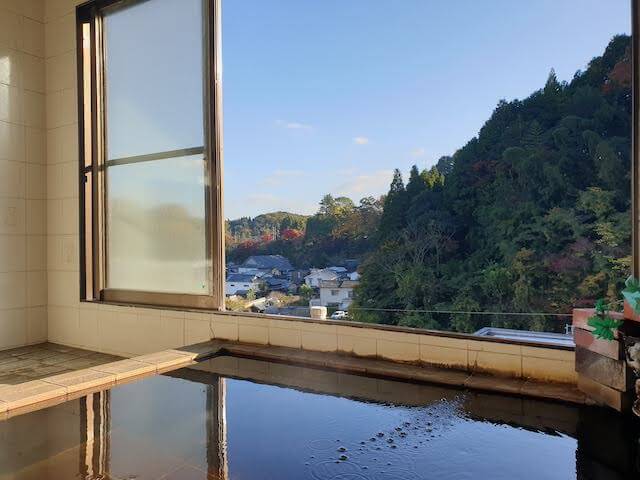 Although it is not known how far back the tradition of onsen dates, one of the earliest references of these hot spring is from as early as the 1st century. Initially an outdoor luxury “health resort” that was once reserved only for nobility, the onsen grew in popularity following the expansion of Japan’s railway and later became known as public bathing houses. With over 25,000 hot springs across the country, they are now enjoyed by everyone in Japan and are a particularly popular pastime at the weekends and during holidays such as The Golden Week and New Year.

Originally adorned with statues of animals, which was a tribute to those who it was believed uncovered these hot springs. It is thought that they were discovered by hunters and those pursuing injured animals, seeking to soothe their wounds in the healing waters.

The ritual of bathing in onsen was strengthened further with the arrival of Buddhism in Japan during the 6th century. A ritual, bathing in the waters was considered a way of cleansing the body of your sins, and a way to soothe the body in the healing waters.

Although the number of public bathhouses began to decrease as homes began to get their own baths installed, onsen have subsequently become an increasingly popular tourist attraction in Japan, experienced by thousands of travelers every year; and are enjoyed by locals across the country.

Why is Onsen & Onsen Culture so Important 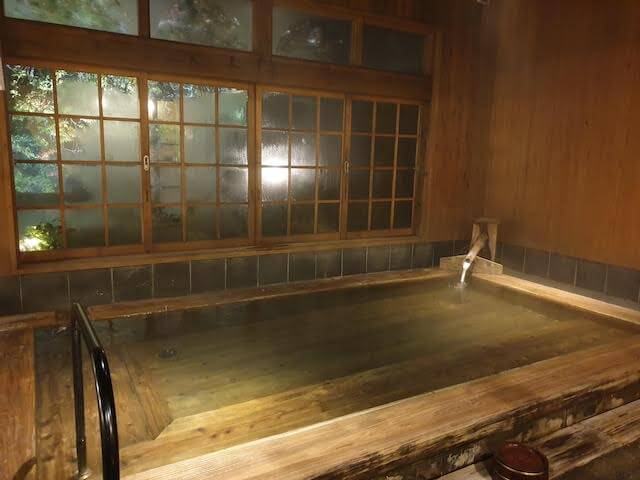 They are a historic Japanese tradition

Enjoyed by Japanese people across history, a dip in an onsen is an opportunity to experience the authentic culture of the country. With many of us wanting to enjoy unique experiences on all our travels, an onsen is surely one of the best historical attractions with countless sights to choose from. It is a relaxing, healthy, bonding experience between participants, and it is believed that a special kind of platonic friendship develops when people do not hide behind their clothes. In Japanese, these relationship is called hadaka no tsukiai.

The natural hot spring water found in onsen has been highly regarded for its health benefits throughout history. Rich in minerals including sodium chloride and calcium they are thought to help relieve muscular pain, swelling and fatigue. The hot water is also thought to help improve your body’s metabolism and cleanse it of unwanted toxins. Not only this the but the relaxing qualities of onsen make them the ideal destination for those looking to relax, helping to support positive mental health. 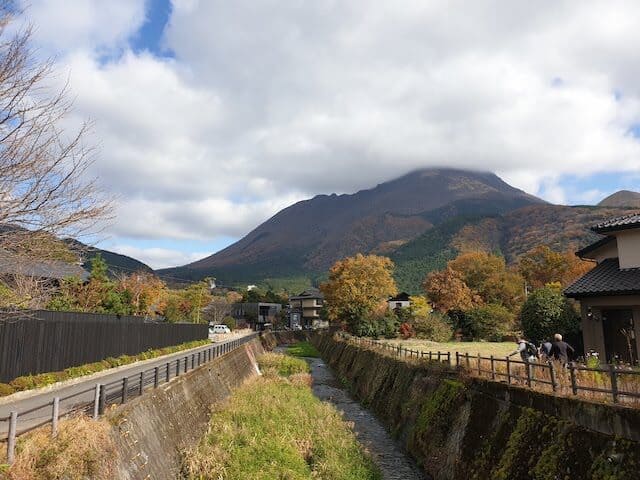 Located in areas of natural beauty

As we’ve already mentioned, onsen can be found right across Japan, many of which are located in picturesque, rural areas. Surrounded by beautiful landscapes, From mountain tops to dense forests, onsen are famed for their spectacular views. Which makes it no surprise why they are now quite so popular amongst tourists.

A popular attraction particularly over the weekends we can see why Japanese locals love to enjoy a relaxing dip at an onsen after a busy week. For anyone visiting Japan, you will know there is plenty to see and do from the bustling cities to historic temples. So, why not cap off your trip with a bit of time to relax and rejuvenate your body at a traditional onsen.

How to Onsen in Japan: Onsen Rules & Etiquette 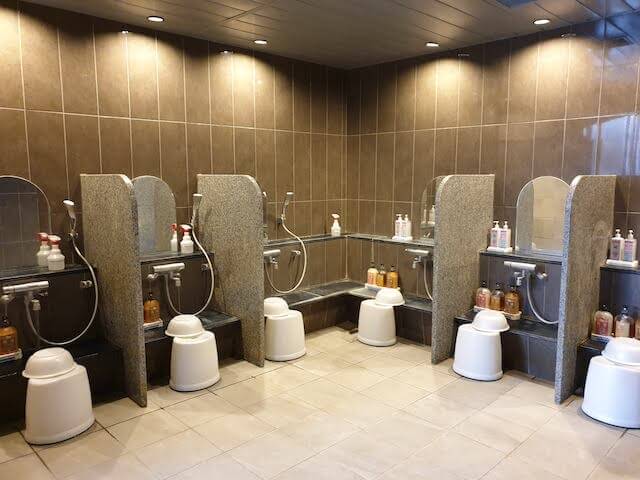 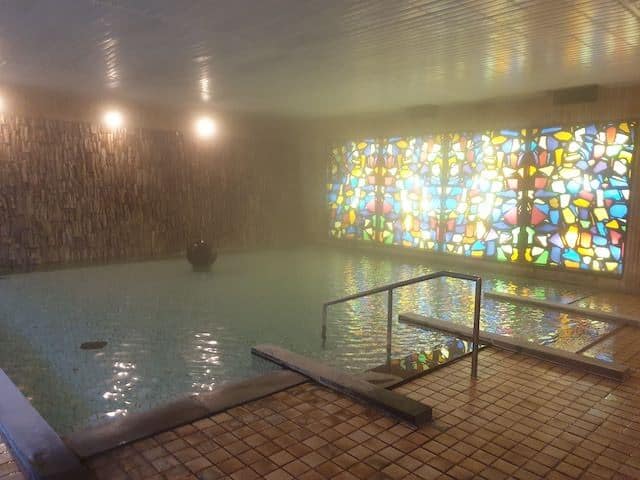 Can I visit with my children?

Older children, no longer in diapers can onsen with their guardians. Men and women bathe separately but it’s absolutely fine for your children to join either gender.

How long are Onsen sessions?

You can enjoy multiple dips when visiting an onsen but its recommended that you stay in the water for a max. of 15 minutes and then allow your body to cool before dipping again.

How hot are Onsen?

Can you visit an Onsen on your period?

For hygiene reasons, it’s not recommended that you visit an onsen during your period.

Where to Onsen: The Best known Onsen Towns in Japan 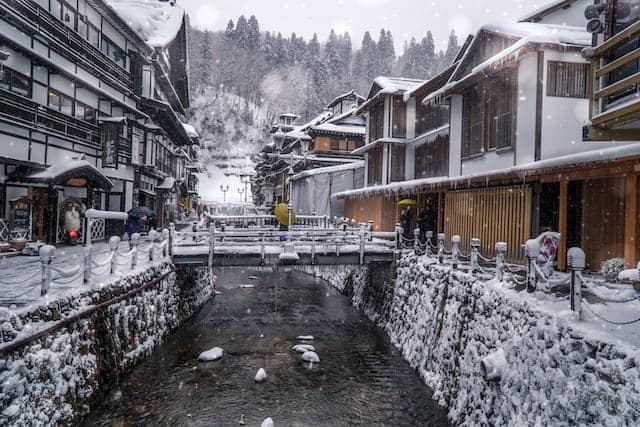 With thousands of Onsen scattered across the country, you can typically find at least one Onsen in every town, if not in every Ryokan. There are also plenty of Onsen towns, two of the most famous being

However, if you want to really get to the heart of Onsen Culture, you absolutely must head to Kyushu Island in Southern Japan. The third largest island of Japan’s 5 main Islands, it is known as the Onsen Capital of the country. Boasting Onsen towns by the bucketload, each with their own vibe, and a whole heap of other attractions to entertain visitors, whether your an Onsen fanatic or a first timer, Kyushu is definitely the place to dip your toes (and the rest of your body!) in!

A Quick Guide to Kyushu: Onsen Towns, Where To Stay & Things to Do

With over 2000 Onsen scattered across Kyushu Island, it can be tough to know where to start, so we have picked out our top 3 Onsen areas to help you get the best out of the region. 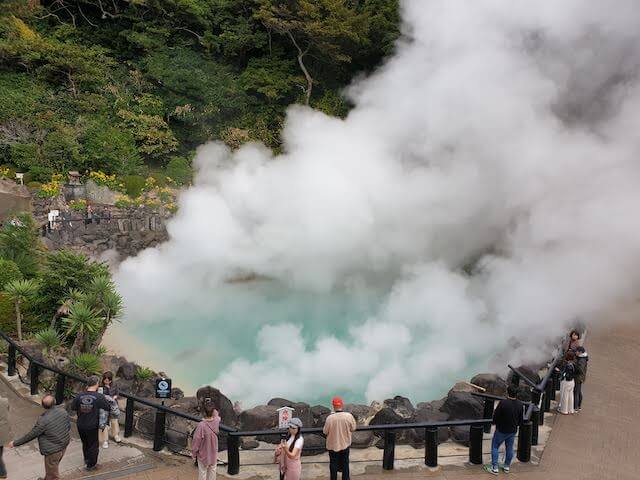 Beppu city in Oita prefecture is home to eight distinct onsen towns, each with public baths, ryokan and restaurants where the onsen waters are used to steam and boil food. There is even a restaurant where you can sit with your feet in the Onsen as your meal is cooked by the steam meters from where you sit.

Other attractions in Beppu Onsen: 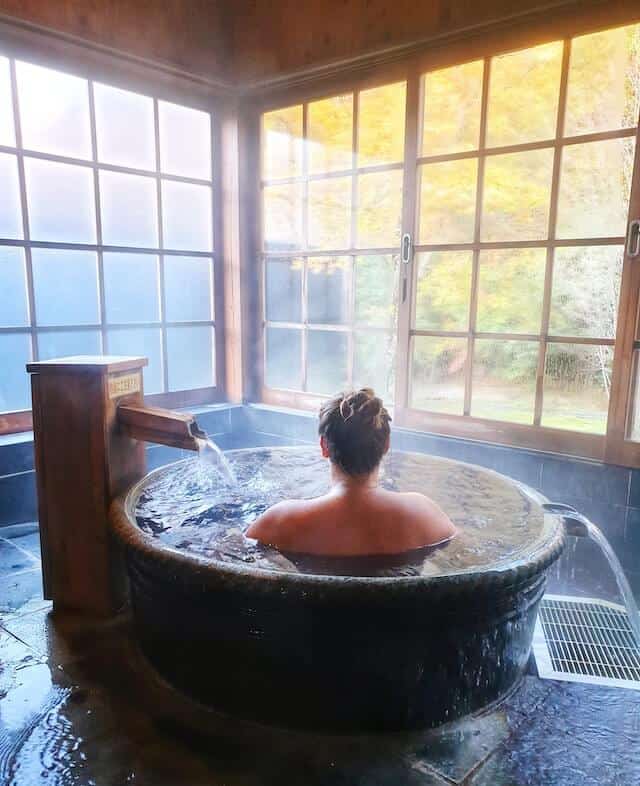 Famed as one of Japan’s most attractive hot spring towns, Kurokawa is set in a picturesque valley, surrounded by forest. Complimented by its traditional wooden buildings, visitors can take is easy here and explore the town with its many onsen, boutiques and cafes.

To make the most of your day here, grab one of the town’s Onsen hopping passes which allow you to enter 3 different Onsens over the course of the day. There are maps available at the visitor center showing the location of the different onsen, their capacity, whether they are male/female or mixed and each has photos of the various facilities. The majority of the Onsen in Kurokawa are located in traditional Ryokans, and so visiting also gives you a peek inside a the traditional hotels.

The map also contains a summary of the mineral properties of each Onsen, and recommendations for what type of bodily complaint (if any) it is best suited for. Renowned as a healing onsen town, the high and varied mineral content of each hot spring can help alleviate all manner of ailments.

Our top tips for Kurokawa Onsen: 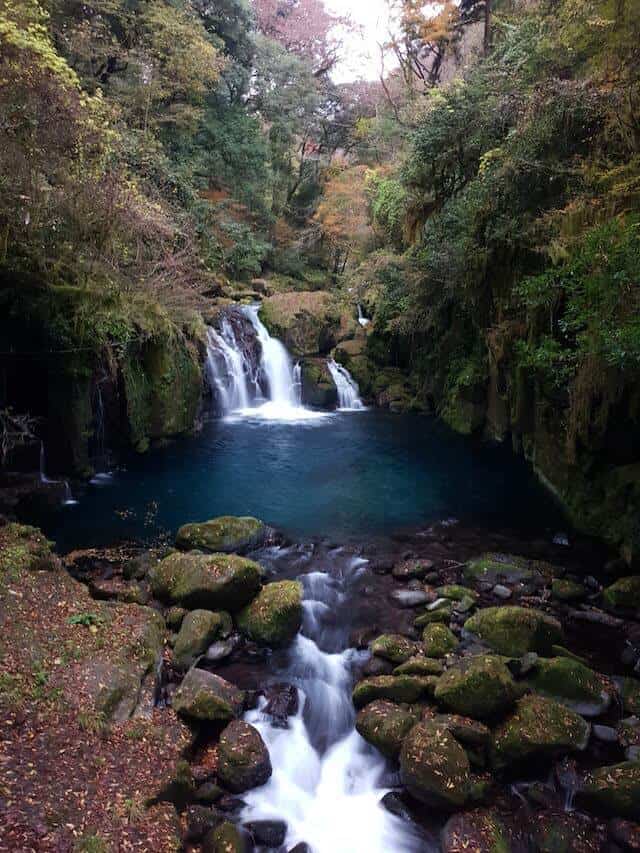 Surrounded by the mountains of Kyushu, this onsen’s most prominent vista is that of the twin peaks of Mount Yufu. During your stay, you may delight in Yufuin’s many boutique stores, art museums, and cafes along the aptly named ‘shopping street’. There are also ryokan scattered throughout the town, many of which open their onsen to walk-in guests during the day (although they are not as numerous as Kurokawa).

The area surrounding the town is quite rural, with the buildings quickly giving way to rice paddies and rivers; with the contrast providing great scope for visitors to experience town and country life in one. 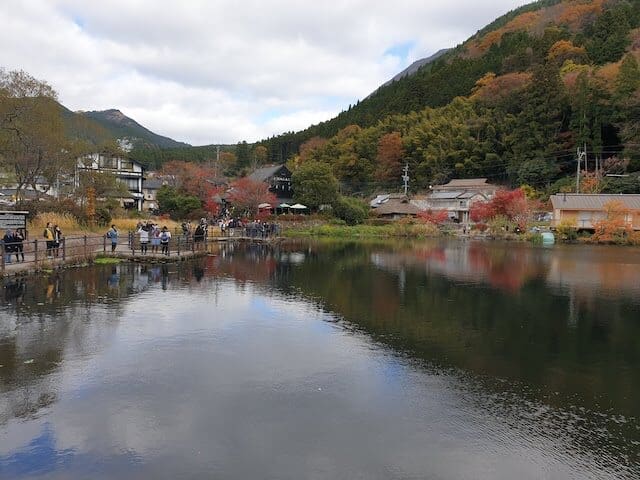 Things to do in Yufuin Onsen

And that’s a wrap! We’re pretty sure even the most seasoned travelers have never experienced anything like Onsen bathing, and so we hope this guide has got you fully up to speed with Japanese Onsen Culture.

We’ve covered what an Onsen is, how you ‘Onsen’ and right down to where you should Onsen in Japan. And as one of Japan’s most popular tourist attractions, we can’t think of any better way to experience local culture, take in the scenery and enjoy ultimate relaxation all at the same time. If you have more top onsen tips, we want to hear from you. Let us and our readers know in the comments below. 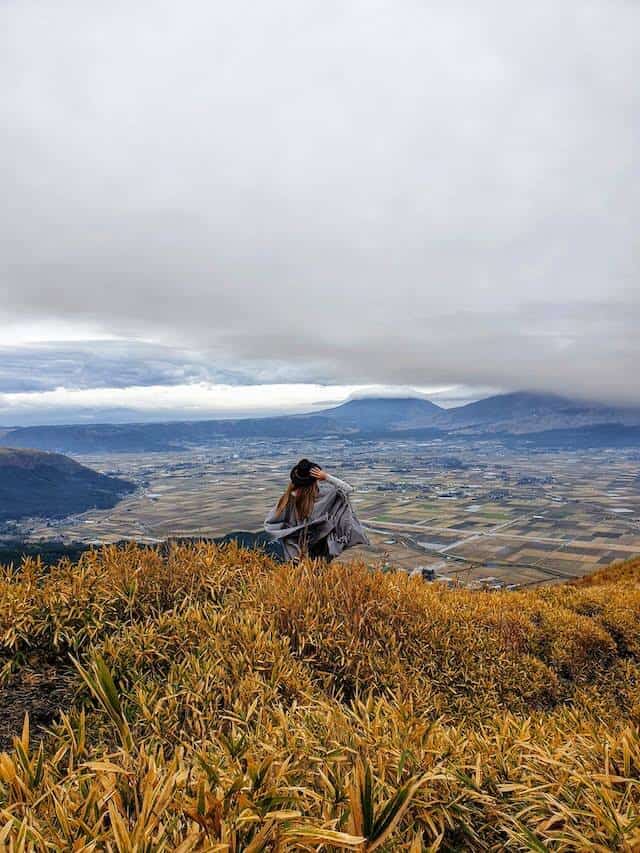 READY MORE ASIA TRAVEL INSPIRATION? YOU MIGHT BE INTERESTED IN THESE TRAVEL TIPS, TRAVEL ARTICLES, DESTINATION GUIDES AND RELATED POSTS:

Hi There! Thanks for reading our Complete Guide to Onsen Culture in Japan: Why, What, Where & How to Onsen in Japan! I just wanted to let you know that this post contains affiliate links, which means if you purchase something after clicking a link, I may get a small commission – which is at absolutely no cost to you. If you enjoyed this article and are going to be searching for some of the things I mention anyway, I would love it if you could click through from the links above & thank you in advance! Read my full Disclosure here.