PERFECT 48 Hours in Boston – Things to Do, Where to Stay & Where to Eat!

If you are planning a weekend in Boston and wondering what to do when you get there, this guide is for you! Boston is known mostly for it’s serious sporting ties (the Red Socks, Celtics and Bruins to name a few!) and stacks of history including the Midnight Ride and it’s contribution to the America Revolution with the Boston Tea Party.

It’s also known for it’s seafood focused cuisine and boasts parks, lakes, museums and more to keep everyone entertained during their 48-72 Hours in Boston. Keep reading for our run down of the top things to do in Boston, the best places to stay in Boston and a few suggestions of where and what to eat whilst you’re in the city to help you plan the perfect city break. 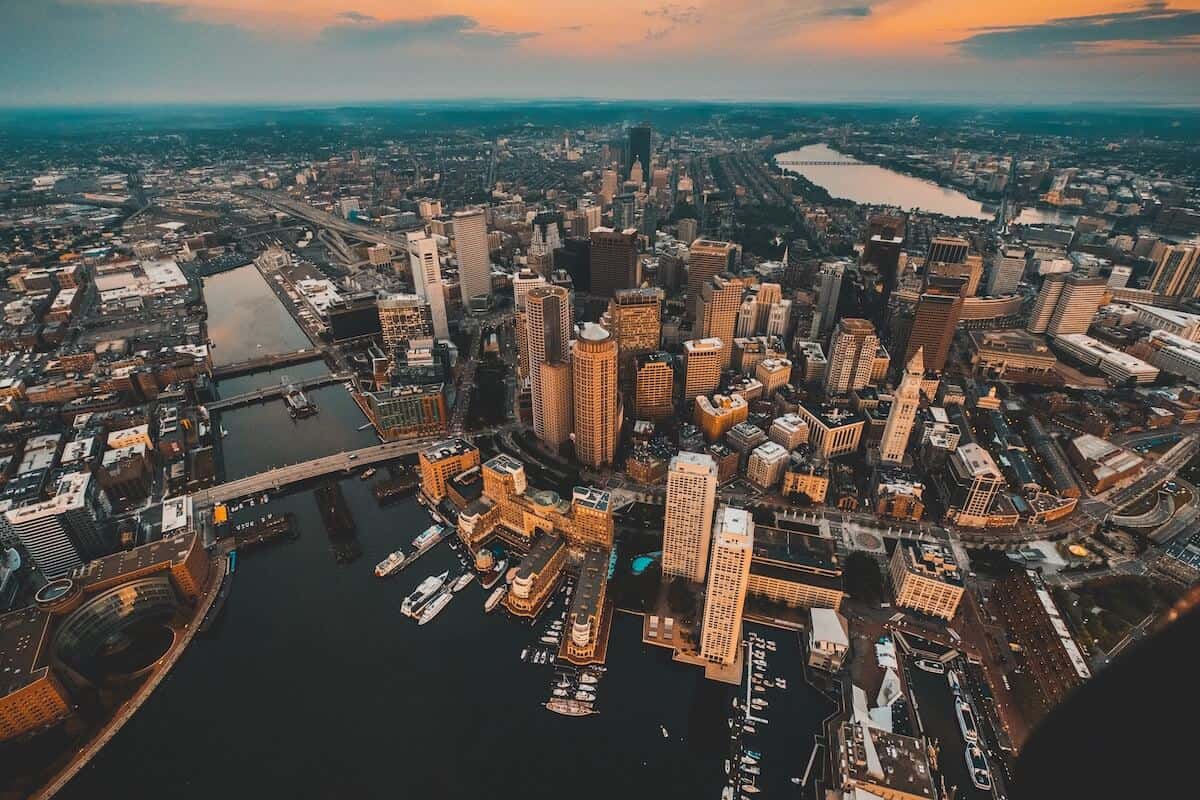 Disclaimer: Almost all posts on this site contain Affiliate links, and this one about an epic 48 Hours in Boston is no different. This means that if you click on any of the links in this post (and make a purchase) I may receive a small commission at absolutely no cost to you. Each post is carefully crafted to (hopefully!) answer all your questions and recommendations are made where we believe they will improve your trip and help with your planning. As such we thank you in advance should you decide to click & buy. Read my full Disclosure here.

A Guest Post by Brianne Miers from A Traveling Life

Boston, Massachusetts, packs a lot into 50 square miles – from world-class museums to beloved sports venues to important historical sites to impeccably designed parks. I’ve had the pleasure of calling “The Hub” my home for more than nine years now, and I still haven’t done everything there is to do. But given that it is considered one of the “most walkable” cities in the U.S., you can cover a lot of ground in 48 hours in Boston. To help you get the most out of your visit, here are my recommendations for the 10 things you should have on your weekend itinerary.


Where to Stay in Boston 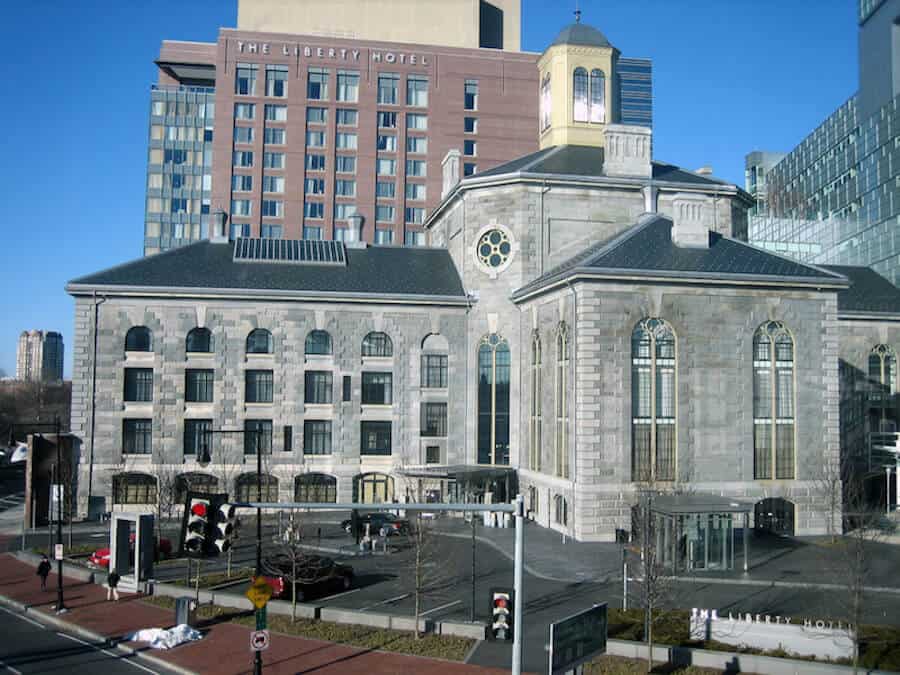 Used under CC from Ben+Sam

Fun Things To Do in Boston 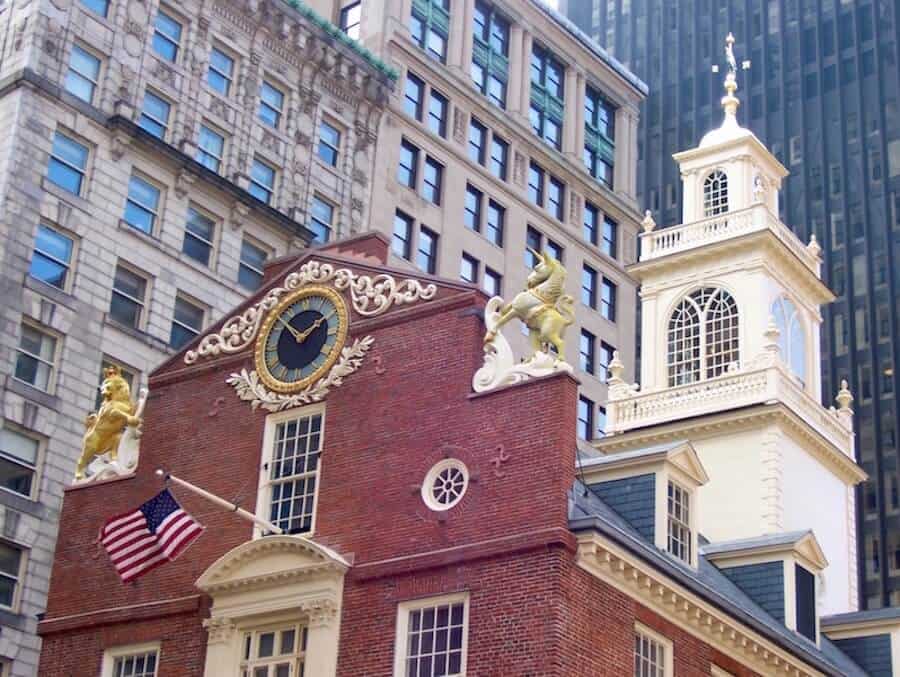 The Freedom Trail makes sightseeing in Boston easy and it’s ne of the top things to do in Boston. It’s a 2.5-mile route marked by a red brick line in the sidewalk that connects 16 of Boston’s main attractions including the Massachusetts State House; Granary Burial Ground, Old South Meeting House; and Faneuil Hall and Quincy Market, where you can find plenty of food, shops and entertainment.

You can walk the trail on your own, or there are numerous walking tours you can join. Guided tours often commence at the Boston Public Library, offering you a chance to step inside this historic building before you start your tour.

RELATED – Boston is one of the 30 Best Places to visit in the USA – but do you know what the other 29 are? And how many have you visited?! 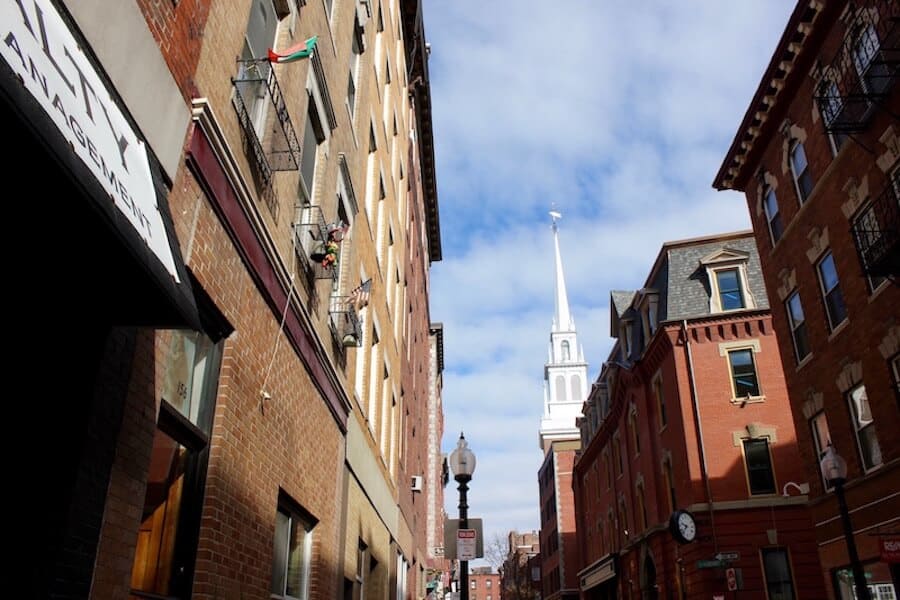 The Freedom Trail runs through the North End, which is Boston’s “Little Italy.” It’s worth spending time wandering through the narrow cobblestone streets and visiting sites like Old North Church and the Paul Revere House. Needless to say, it’s also worth eating while you’re there will a Pizza Tour being one of the top activities in the area.

But if you’re not up for eating all the pizza, two of my favorite restaurants are Giacamos and Cantina Italiana. For coffee and sweets stop by Caffe Paradiso, where you’ll usually find a European football match on TV, and for dessert, try to choose between rival cannoli shops Mike’s Pastry and Modern Pastry. 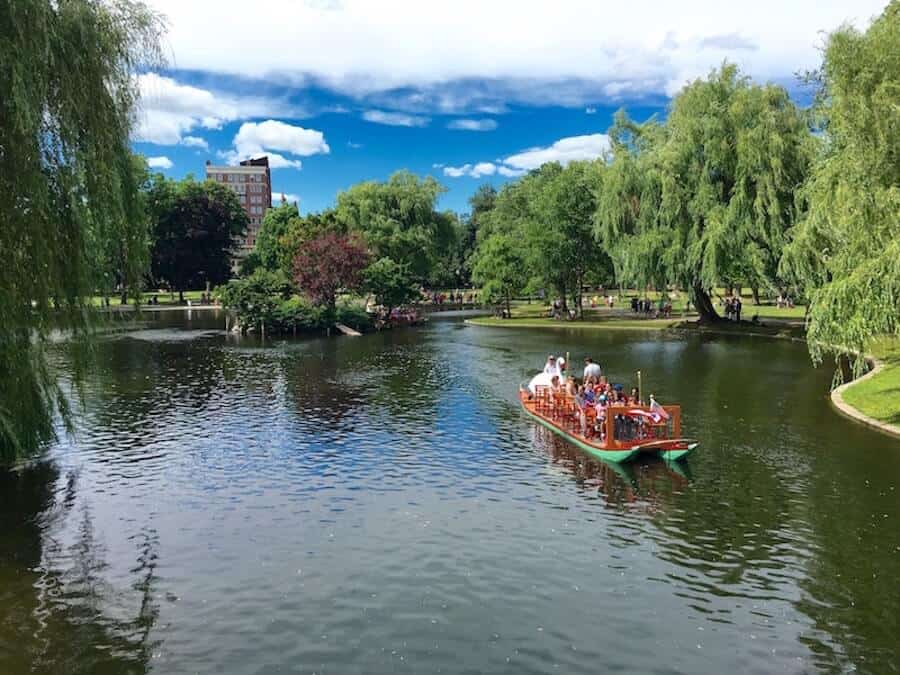 If you’re blessed with good weather during your 48 hours in Boston (or better still 72 hours in Boston), then spend some time strolling through the Boston Public Garden and Boston Commons (the oldest public park in the USA!) which are a pair of beautifully landscaped parks in downtown Boston.

They’re great for people watching and dog watching, and kids love playing in the Frog Pond, which is turned into an ice skating rink in the winter. You can also take a ride on one of the beloved swan boats, which have been sailing in the pond since 1877.

If you have some extra time, the Beacon Hill district is right night to the Common and is one of the most picturesque regions in the city (perfect for those Insta shots!)

RELATED: Want to explore more of the East Coast- check out our guide to The Incredible Things to do in NYC + how to explore like a local! 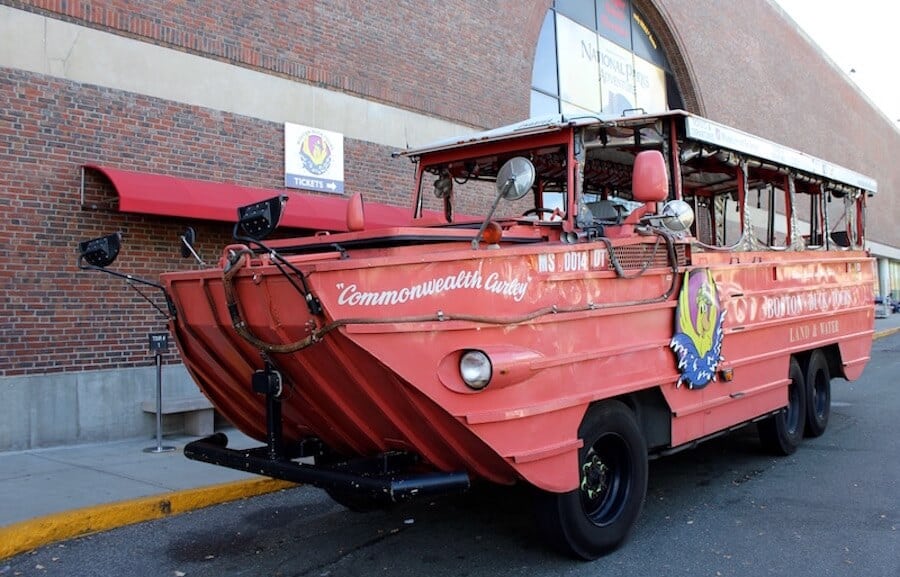 For an entertaining look at Boston’s main attractions, hop on a Duck Tour. Riding in a colorful “WWII style amphibious landing vehicle,” you’ll drive through several neighborhoods and then take a spin in the Charles River.

It’s a must see in Boston – whether you take a spin or not but for families, kids on board will love the antics of the “conDUCKtor” as well as making quacking sounds with their duck whistles. 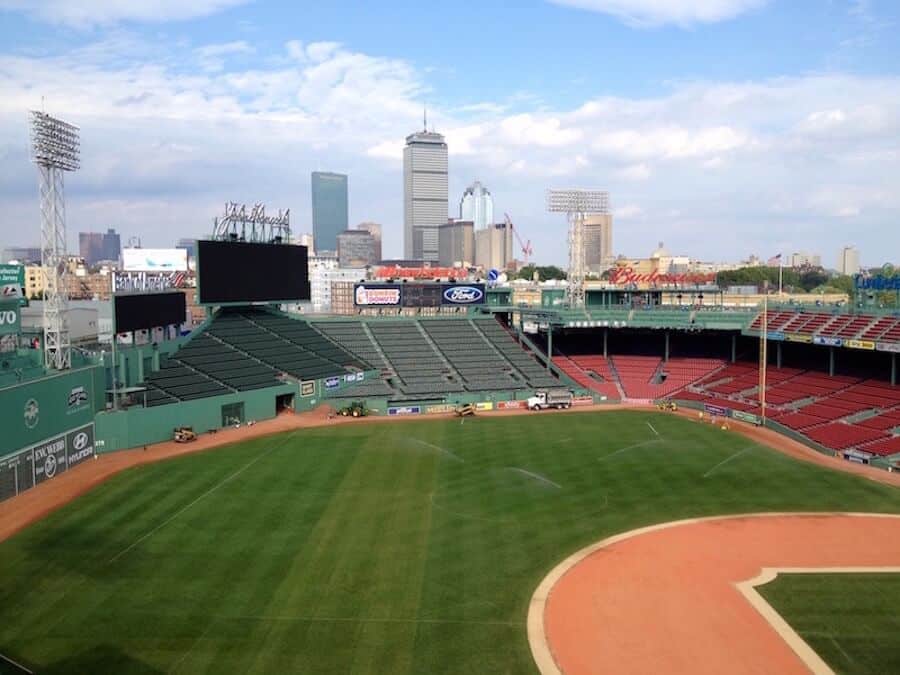 Boston’s beloved Red Sox play in the oldest baseball stadium in the country, and going to a game at Fenway is definitely a unique experience. If you don’t have tickets, you can take in the game from Bleacher Bar, which offers great views of the park. Daily tours are also available year-round. 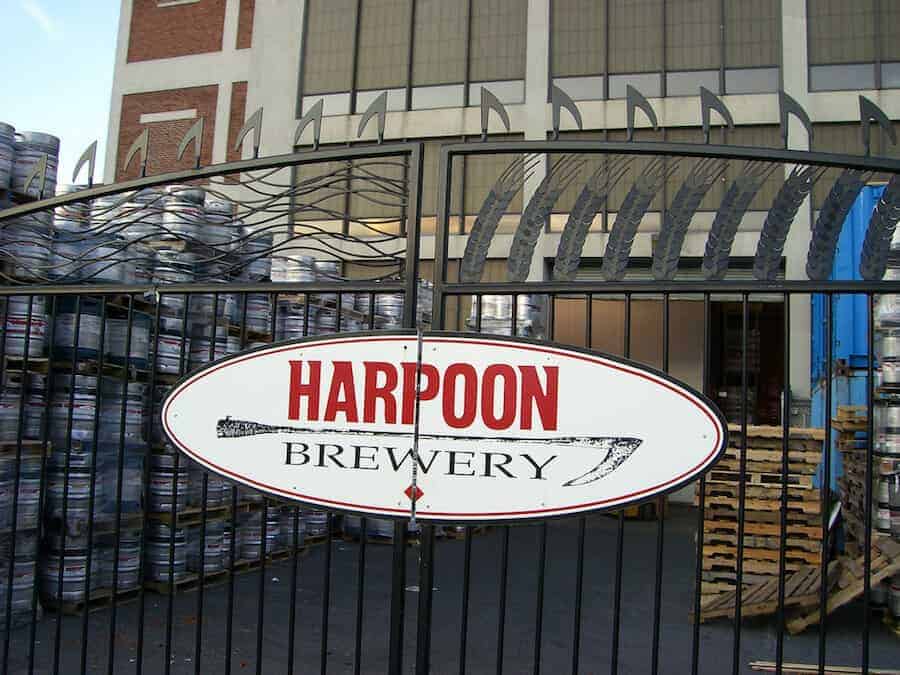 Harpoon is not the most famous Boston beer – that distinction would likely go to Sam Adams – but it’s brewery in the Seaport District is worth a stop. You can take a free tour of the facility and then hang out at the beer hall to sample a wide variety of Harpoon and UFO brews while snacking on giant pretzels.

There also are numerous events and festivals held on site throughout the year. And if one brewery isn’t enough, why not join a Boston Brewery Tour (which thankfully includes lunch!) and some some more of the cities great ales whilst learning about it’s Brewing history. 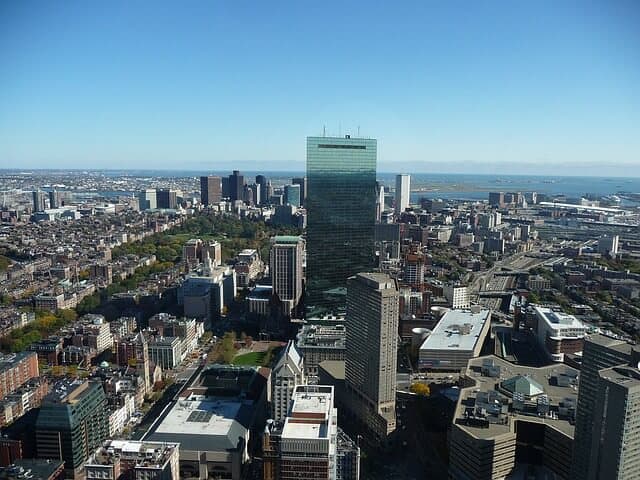 If you want to see what Boston looks like from on high, head to the Prudential Tower in the Back Bay. You have two options for taking in the breathtaking 360-degree views of Boston: the Skywalk Observatory on the 50th floor, or the Top of the Hub, a restaurant and lounge on the 52nd floor.

On a clear day, you can see up to 100 miles away from the top of the Prudential Center (which is a long way!)

RELATED: Looking for something a little different to a city break? Hawaii is always a good idea! 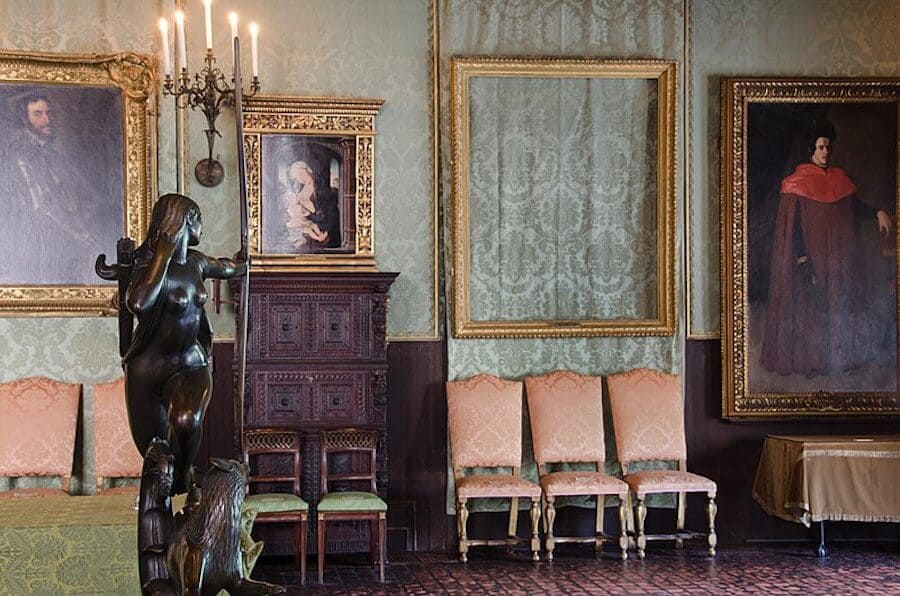 Interesting fact: the museum is the site of the largest unsolved art heist in the world. Thieves cut priceless works of art from their frames, and those frames still hang in place. 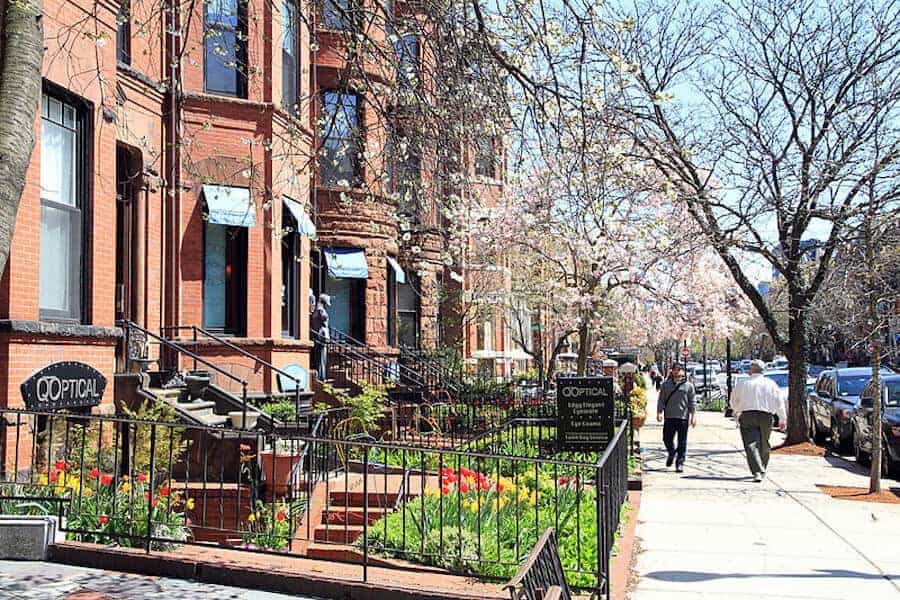 Used with permission under CC from Ingfbruno

The eight blocks that make up Newbury Street in the Back Bay (also known at the ‘other’ Downtown) are packed with stores, salons, restaurants, cafes, and bars. You’ll find a wide range of retailers – from H&M and Nordstrom Rack to Burberry and Dolce & Gabbana – as well as one of the world’s largest Apple stores. If you need an energy boost while you shop, get a caffeine fix at  Trident Booksellers. 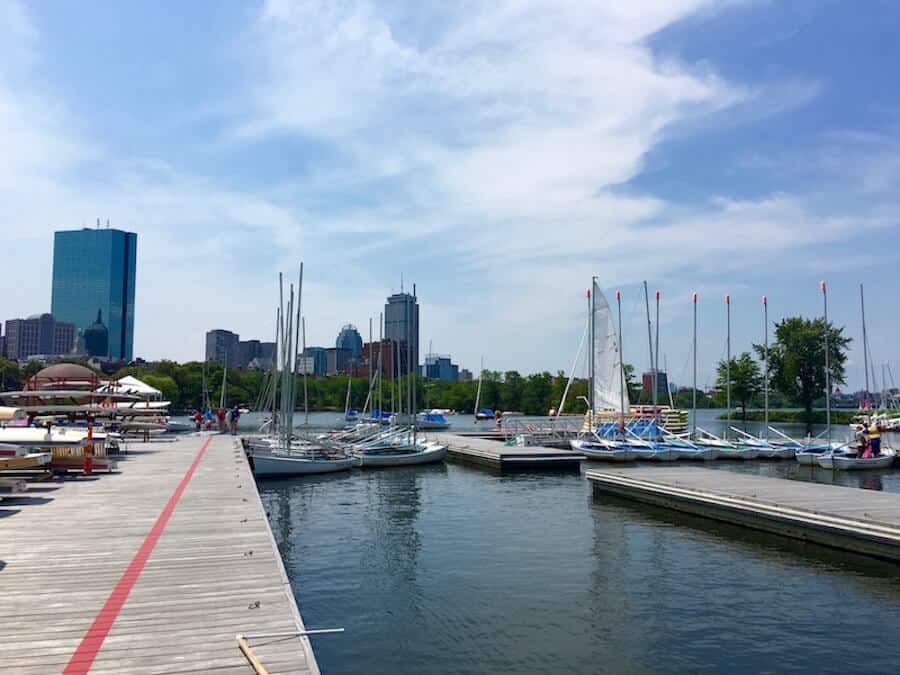 The Esplanade, a scenic park that runs along the Boston side of Charles River, offers a peaceful escape just steps from the Back Bay (and the MGH “T” stop). You can take in views of Harvard University and MIT across the river while walking, jogging or biking. Or if you’d like to get out on the water, you can rent kayaks and stand-up paddleboards by the hour at Community Boating.

What and Where to Eat in Boston 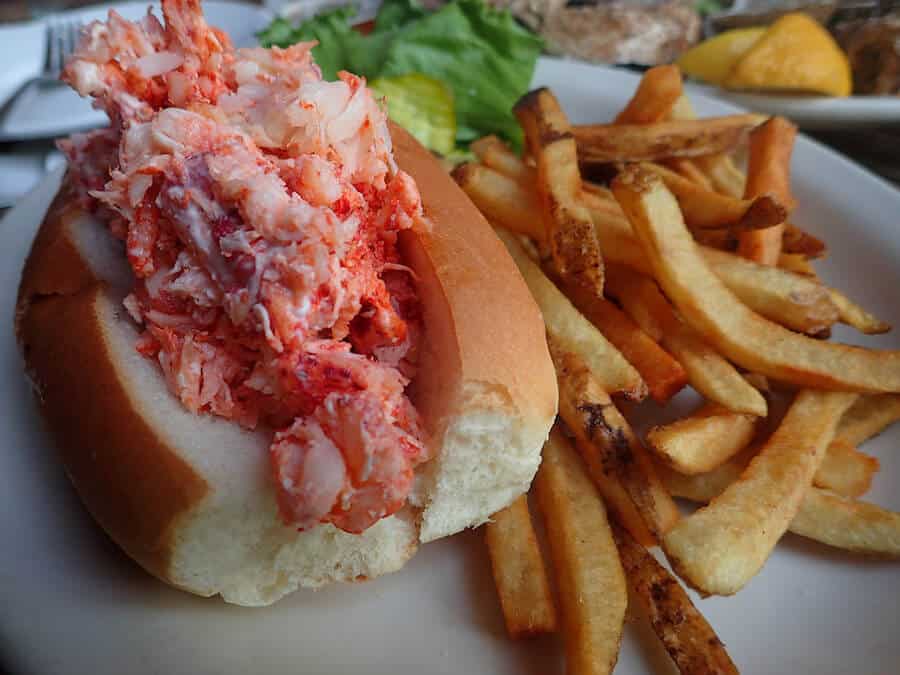 Boston is serious about its seafood, and there is no shortage of excellent restaurants serving up regional specialties like New England clam chowder and lobster rolls. Casual eateries include Barking Crab and Yankee Lobster Co. in the Seaport and James Hook & Co. on Atlantic Ave., while Atlantic Fish Company, Row 34 and Ostra are on the higher end. And if oysters are your thing, then head to Neptune Oyster or Island Creek Oyster Bar.

Thanks to Boston’s Italian settlers, there are plenty of places to get good pizza and Italian comfort food around town. In the North End, long-time favorites include Regina Pizzeria, which has been in business since 1926, and Ernesto’s Pizza, while a newer joint is Locale. Outside of the North End are Pastoral in Fort Point, Picco in the South End and Santarpio’s, an East Boston classic.

And after all the eating and drinking you can get a piece of Boston Cream Pie – the official Massachusetts dessert – at Omni Parker House, which created it soon after opening in 1855.

*EXTRA* Bit of a whizz in the kitchen? Why not make some of these iconic Boston dishes at home with these recipes for Clam Chowder, Boston Baked Beans & Boston Cream Pie

So there you have it – hopefully this Boston travel guides and travel tips has given you enough information to plan your trip to Boston – and given you a great list of Things To Do in Boston Ma to make sure you get the most from your visit. Don’t forget to let me know your own highlights once you’re back!

Hi There! Thanks for reading our 48 Hours in Boston City Guide! I just wanted to let you know that this post contains affiliate links, which means if you purchase something after clicking a link, I may get a small commission – which is at absolutely no cost to you. If you enjoyed this article and are going to be searching for some of the things I mention anyway, I would love it if you could click through from the links above & thank you in advance! Read my full Disclosure here.

PERFECT 48 Hours in Boston – Things to Do, Where to Stay & Where to Eat! was last modified: October 27th, 2020 by Brianne Miers
Brianne Miers

I’m Brianne, and I’m “working to see the world” by balancing my career with a life of travel!

Exploring Rajasthan: Incredible Things to Do in Jaisalmer
← Previous
Where to Stay in Seminyak - The Best Hotels for Every Budget
Next →
Click here to cancel reply.

I just moved to Boston and have already eaten at Neptune Oyster. SO GOOD. Can't wait to try the rest of the places you've recommended.

Hi Brianne, I recently visited Boston and loved it! I can't way to go back and check out some of the stuff you mentioned that I missed on my first go around.

I can’t wait to return to this lovely city especially in the Fall. Thanx Brianne!

Fall is definitely my favorite time of year in Boston!

That Boston Cream Pie sounds delicious. One of my fave pies of all time. I have seen a Yanks-Sox game at Fenway. One of my most cherished sports memories. What an inspired energy in that place, as you feel history bleeding through the seats, the walls, the field. I do not see many of those old skool stadiums left, which is a shame.

Thanks for reading, Ryan! That's awesome you got to see a game at Fenway (and a Yankees game no less!) - it is definitely one-of-a-kind. Come back for some Boston Cream pie!