Deserts are fascinating places. Covering vast stretches of barren landscape where very little rain falls (the official definition of a desert is a place which received less than 250 mm of rain per year) – it is the resulting dry and arid environment which makes living conditions extremely inhospitable for humans, plants and animals. But it’s human nature to want to know more – to explore, to experience. And this post is going to help you accomplish just that. From listing the 10 largest deserts in the world to the various tours, treks and adventures that can get you to the heart of each one. The toughest decision – which one to tick off the list first! 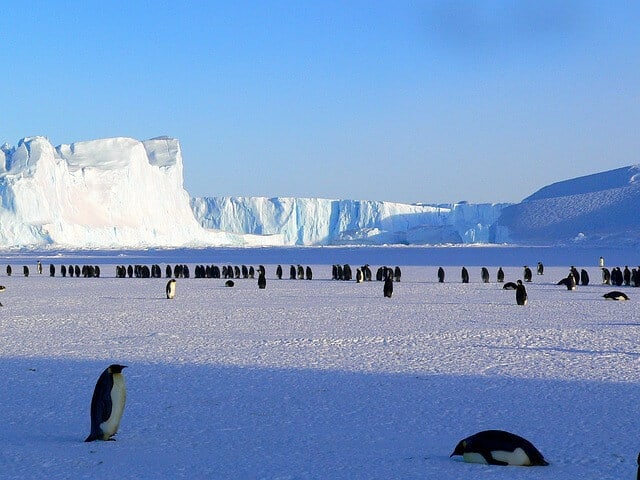 Location: South Pole – and which is the largest desert in the world.
Area: Covers 14,244,935km² (5,500,000 square miles)
OK, so the Antarctic is not what most people think of when someone says the word ‘desert’, but it is classed as such because the region receives as little as 50mm of rain per year (more rain actually falls in the Sahara!) – and mostly in the form of snow. Penguins her outnumber people by the hundreds of thousands but more and more people are exploring this incredible desert landscape each year in the form of Antarctic Cruises. Get ready to tackle what is considered the most inhospitable part of the planet & the biggest desert in the world where you come face to face with whales, penguins, seals and possibly a couple of the 1000 residents that call this desert home – but remember to wrap up warm, *cold* doesn’t even begin to describe the temperatures here! It is the biggest desert in the world and the largest desert in the world or what ever word you want to use to explain the sheer gigantic size of it!

RELATED: Find out what is it is actually like to Visit Antarctica! 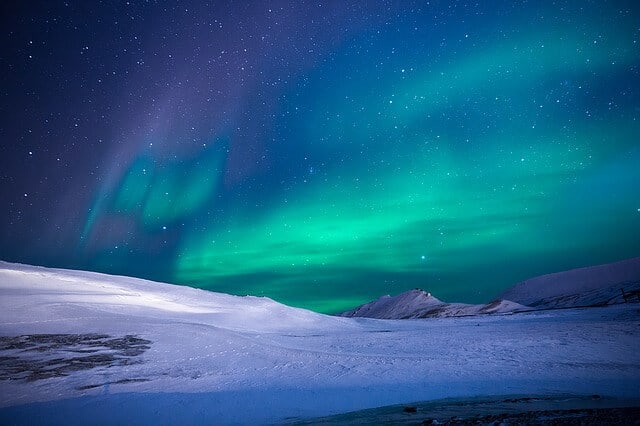 Location: North Pole
Area: Covers 13,985,936km² (5,400,000 square miles)
And at the opposite end of the planet to the Antarctic, we find the second polar desert on the list: the Arctic Desert. It is again classified as such by the little precipitation experienced here, but the Arctic Desert is unique in that it includes an ocean in the middle of it and includes several islands such as Novaya Zemlya, Franz Josef Islands and Severnaya Zemlya which are above 75 degrees north latitude. Another distinctive feature of this second largest desert in the world is that it is home to the Inuit (aka Eskimo) people  who have adapted to the harsh conditions over thousands of years and 700 plant species and around 120 animal species including arctic foxes, polar bears, wolves, squirrels, arctic hares, voles, lemmings, caribou, seals, walruses, and whales. Go and experience the Arctic yourself on these cruise and exploration tours. Do so, and I’m sure you will understand why it is considered one of the most beautiful deserts in the world.

RELATED: Thinking about taking a group tour but don’t know who to book with? Our guide to the Best Tour Operators will help you decide. 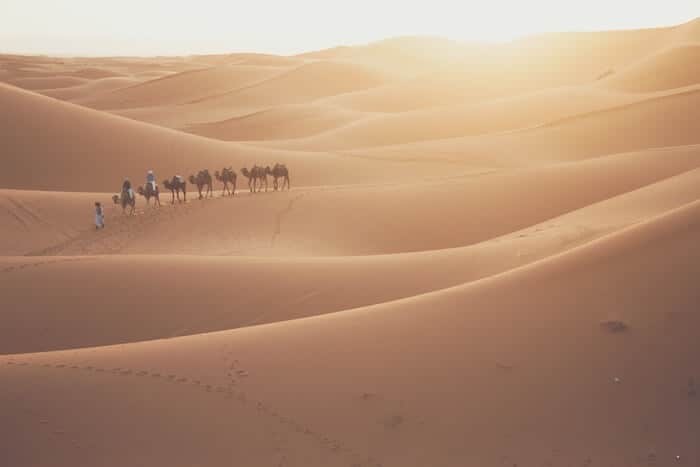 Location: Northern Africa – and the first middle eastern desert on this list.
Area: Covers 9,064,958 square km (3,500,000 square miles)
Now that’s a desert. The Sahara is largest sand desert in the world and it’s size is comparable to the area of China or the United States(!). It is the worlds largest desert made of sand!
It is consistently one of the top deserts in the world that people want to explore and it is estimated that over 2 million people (living in either nomadic and permanent communities) call the Sahara home, alongside some 70 species of mammals, 90 species of resident birds, 100 species of reptiles, and numerous species of arthropods. It is a part of the world that has fascinated and enthralled visitors for millennia. Today’s explorers do so – for the most part – by camel safari or 4×4 desert safari, or a combination of the two; with the most popular departure points being in Morocco.

RELATED – Headed to Morocco? Find out all about Some of the INCREDIBLE Places to Visit in Morocco are (+ get some handy Morocco travel tips for your trouble!) 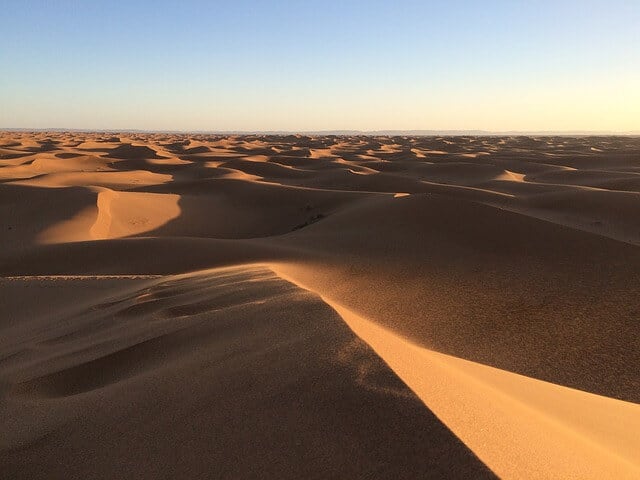 Location: Middle East (Arabian Peninsula including Saudi Arabia, Oman, Jordan, Iraq & Yemen)
Area: Covers 2,330,989km² (900,000 sq mi)
The Arabian Desert is actually composed of three individually named deserts – kind of a 3 for 1 deal!  The largest of which is the Rub’al-Khali Desert (also known as the Empty Quarter as it is the largest continuous stretch of sand in the world) which is located towards the south of the peninsula and is connected to the central Ad-Dhana Desert which then links to the northern An-Nafud Desert.
For avid explorers, Oman is the perfect gateway to explore the Arabian Desert, with tours running by coach, jeep, 4×4 and the opportunity to meet the Bedouin People  and even stay in a Bedouin Camp.  Start planning your Arabian Adventure here.

5. Gobi Desert – the 5th largest desert in the world 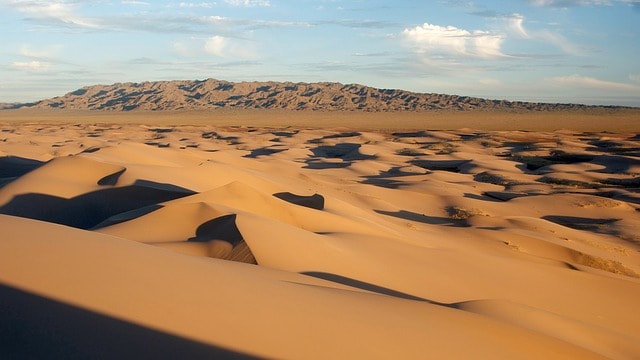 Location: Asia (The desert is located in northern China and southern Mongolia)
Area: Covers 1,294,994km² (500,000 square miles)
The desert takes it’s name from the Mongolian word Gobi, meaning “waterless place” and is known for its dunes, mountains and rare animals such as snow leopards and Bactrian camels. Another first for this list is that in the Gobi Gurvansaikhan National Park, the Khongoryn Els sand dunes are said to sing when the wind blows and in contrast to the dry sand,  the park also features the deep ice field at Yolyn Am canyon.
Tours of the region are focused in Mongolia and offer visitors the opportunity to stay in a traditional Mongolian Yurt, camp underneath the stars and ride ATVs through the dunes – just to name a few activities. Considered the perfect destination for adventurous travelers who want to get off the beaten path, start planning your Gobi Desert Tour here. 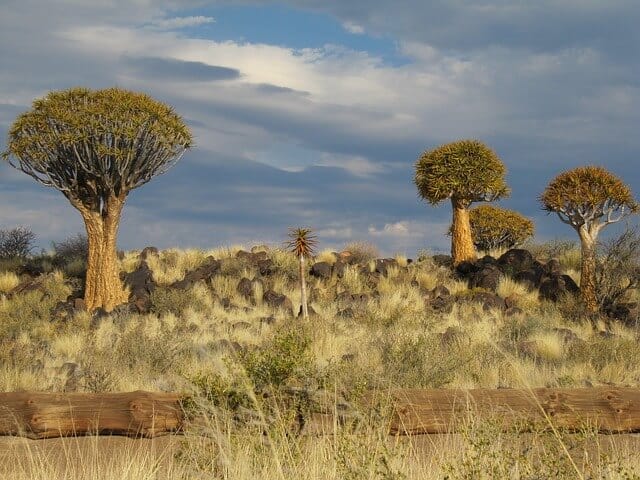 Location: Africa (Botswana & Namibia and parts of northern South Africa)
Area: Covers 932,395km² (360,000 square miles)
Semi-dry and arid, the Kalahari Desert is actually not a desert by strict standards because it receives too much rainfall (5-10 inches per year) however it remains on this list (and every other list of the largest deserts in the world) because when the rain does fall, it filters rapidly through the sand and leaves nothing on the surface. This results in the parched landscape typical of a desert.
Africa is an incredible place to explore, both via an organized tour or independently and although I didn’t make it to the Kalahari Desert on my last Southern Africa safari, I will definitely be including it on my next visit to the continent.

RELATED – Africa is my favorite continent but if you’re not convinced the Kalahari is the destination for you take a peek at The Best Places to Visit in Africa for inspiration. 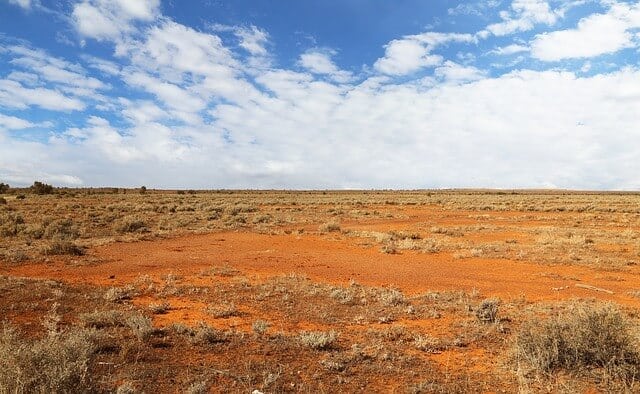 Location: Across parts of South and Western Australia close to the middle of the country.
Area: Covers 647,000km² (220,000 square miles)
Bordering what is known as the Red Center in Australia – so-called because of the colour of the land (in case you hadn’t guessed), it attracts 4-wheel drive enthusiast from around the world who are up for the challenge of traversing this incredible part of Australia. But it’s not open to just anyone – and you need permission via a special permit to drive here. However, unlike some of the deserts on this list, the Great Victoria Desert is not completely arid and actually supports 15 bird species, 95 reptile species and various plants and shrubs – but there are major water conservation works going on in the area and throughout the red center to make this so.
The Great Victoria Desert borders several other deserts in Australia including the Gibson desert and Little Sandy desert in the northwest with the Nullabor Plain to the south, all of which offer different opportunities for exploration to help you get your desert fix!

RELATED:  Exploring the Great Victoria Desert is just one of the many incredible adventures available in Australia – click here to find out all about them! 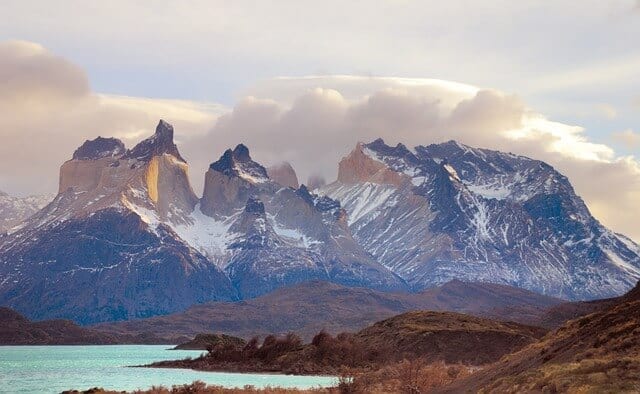 Location: South America (Argentina & Chile)
Area: Covers 673,000km² (260,000 square miles)
A desert of many names, the Patagonian Desert is also known as Patagonia Desert, Patagonian Steppe, or Magellanic Steppe it covers practically all of southern Argentina. Contrasting landscapes include the Andes mountains in the west and in the south, and plateaus and low plains to the east, it attracts hikers, independent travelers and adventure seekers from all over the world with many tour companies offering flexi itineraries and hop-on hop-off bus routes to let you explore at your own pace. 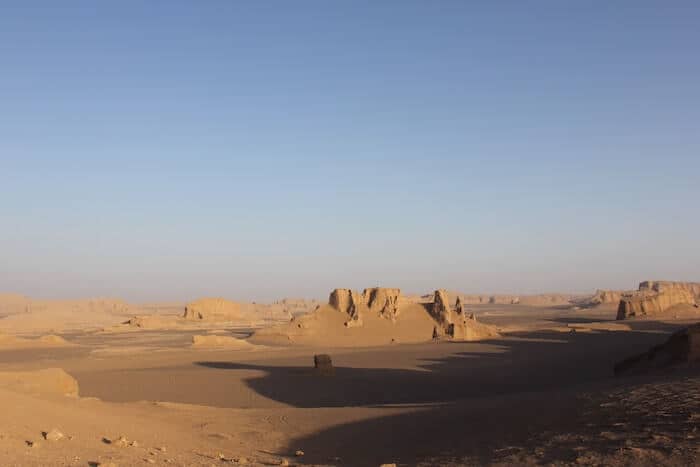 Location: Middle East/Central Asia (south-eastern Syria, northeastern Jordan, northern Saudi Arabia, and western Iraq – and borders the Arabian Desert (above)
Area: Covers 520,000km² (200,000 square miles)
Also known as Al-Hamad, the Syrian desert is a combination of a true desert and a steppe which is flat but very rocky. It is home to several nomadic tribes and breeders of Arabian horses and has been exploited for oil since the 1970s.
Located in an oasis in the middle of the Syrian Desert 215 kilometres northeast of Damascus and 180 kilometres southwest of the Euphrates River lies is the ancient Semitic city of Palmyra, the ruins of which are a UNESCO World Heritage Site.
Unfortunately, this is one desert destination that is off limits to travelers due to the ongoing conflict in the region. It is yet to be seen whether the ancient city of Palmyra will survive the violence of civil war. 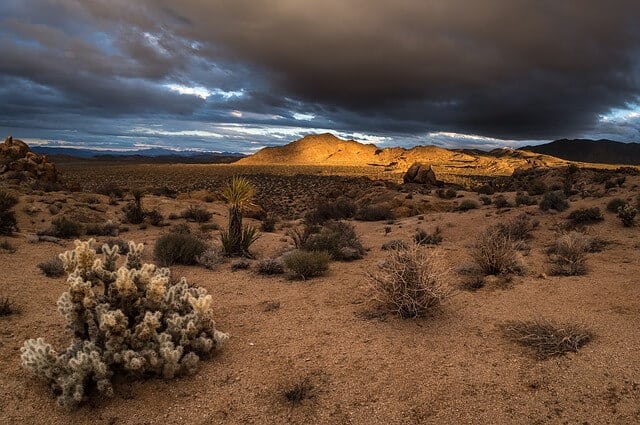 Location: North America (Nevada, California, Oregon and Idaho)
Area: Covers 492,100 square kilometers (190,000 square miles)
Classed as a ‘cold’ desert due to it’s high elevation and northern latitude, the Great Basin Desert is bordered by the Sierra Nevada Range on the west and the Rocky Mountains on the east, the Colorado Plateau to the north and the Mojave and Sonoran deserts to the south, and is the only north American desert on our list (and as such is the biggest desert in America).
The vegetation in the Great Basin is low and homogeneous, often with a single dominant species of bush or shrub for mile.
Exploration is easy here, with accessible roads, hiking trails, caves and opportunities for star gazing available for free for everyone (or small entry fee for the caves).

There you have it folks – that’s a run down of the top Ten Largest Deserts of the World. I hope we have ignited a sense of wanderlust and encouraged you to get out and explore  – and if so, don’t forget to let me know which desert is first on your list in the comments below!

Hi There! Thanks for reading my guide to Largest Deserts in the World -and How To Explore Them! I just wanted to let you know that this travel guide contains affiliate links, which means if you purchase something after clicking a link, I may get a small commission – which is at absolutely no cost to you. If you enjoyed this article and are going to be searching for some of the things I mention anyway, I would love it if you could click through from the links above & thank you in advance! Read my full Disclosure here.

Good to see this, I hope you will post more like this. I personally have a great interest in tourism. That's why I request you to post more about tourism, especially in Sharjah.

Thanks, this helped me with my test.