Amsterdam. A town referenced by it’s red light district and legal cannabis, it’s safe to to say that it’s stereotypical visitor is looking for something a little different to traditional tourist activities. Yes, there are cruises along the canals, and world class museums to explore, but a lot of people are looking for the salacious.

Join me for a tour of the best museums in Amsterdam that celebrate sex, drugs, beer & cocktails! 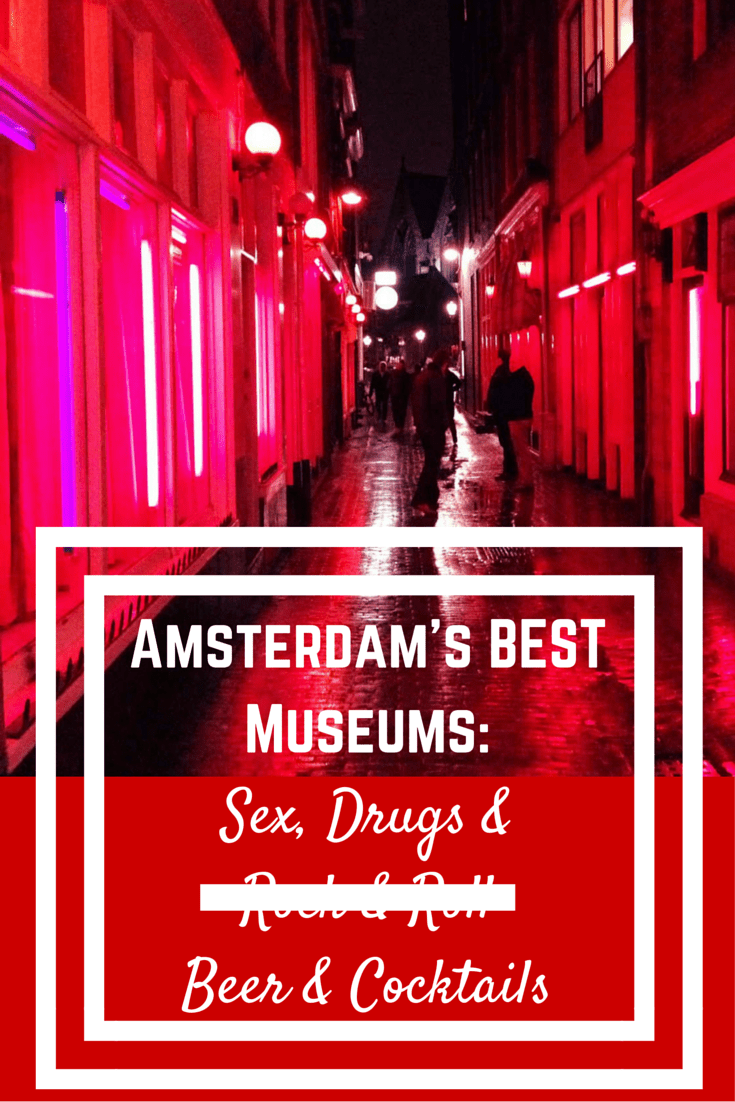 Let me tell you that if you are in any way a prude, the sex museum is not for you. But for those that don’t mind a bit of a giggle, spend a few Euros and walk through a ‘museum’ that displays photographs and sex toys throughout the ages, along with some interesting mannequins, a few giant penis statues and is accompanied by a soundtrack of muffled sex noises. I guarantee – you’ll have never been in a museum like it! 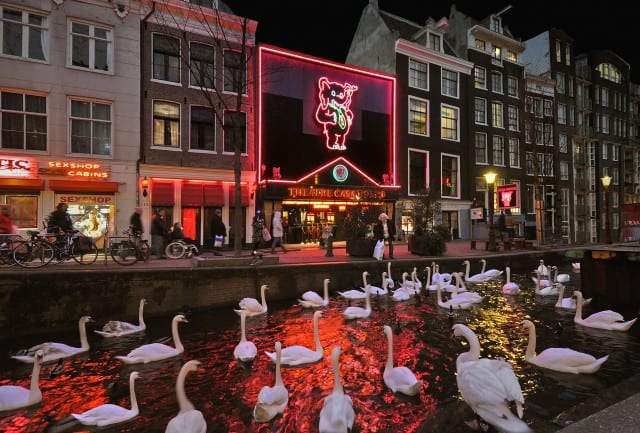 Not for everyone, but a live sex show can be considered the epitome of a visit to Amsterdam. After taking an obligatory walk around the red light district during the evening, the Pink Elephant is the safe option of experiencing the sex industry without it being too seedy.

Set in a 180 seat theater there are various ‘performances’ throughout the show ranging from lighthearted audience participation with individual performers to full sex on a revolving bed.

Don’t expect romance! It’s a mechanical, co-ordinated affair and to be honest at some points, comical – although I don’t think that’s what the performers are going for… 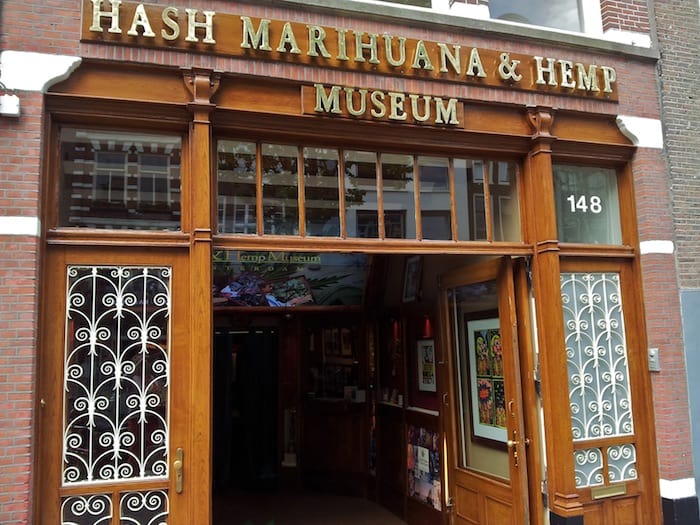 As out there as it sounds, this museum is well presented and well informed. It is one of the most important museums dedicated to Cannabis in the world and houses unique exhibits around hemp, including the history of hemp and explaining exactly what marijuana is. One of the most interesting exhibits is the one that catalogues the ‘war on drugs’ against marijuana over the past 80 years and illustrates prohibition across the world. In addition to these exhibits it functions as a knowledge center and facilitates scientific research.  Take an audio tour and you’ll understand the importance of hemp in modern society and why Amsterdam has embraced it with open arms.

RELATED: Looking for a more relaxed setting (and where you can actually get your hands on some goodies – check out this Amsterdam CoffeeShop Guide for locations and menu options! 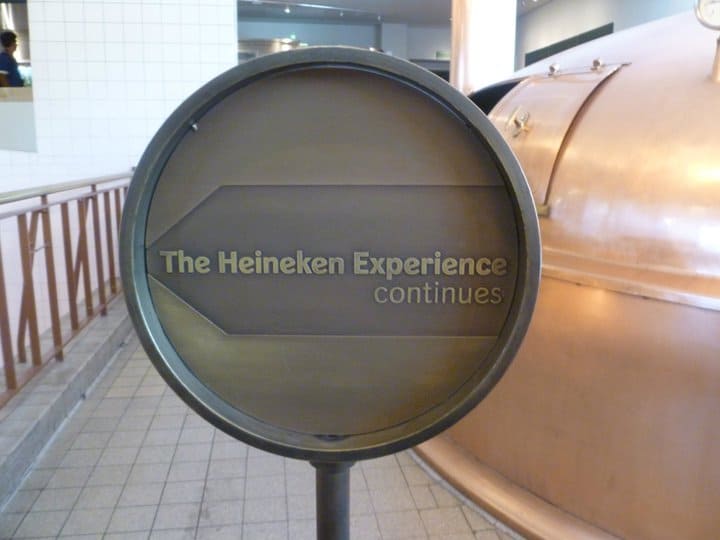 Housed in the original brewery building built in 1867, it remained operational to 1988 when a larger facility was built.

The museum is over four levels taking you through the process of brewing beer, offering product samples in the tasting room – which my partner particularly enjoyed as he got double serves as I’m not a beer drinker – and a high tech multimedia area where you can make your own music or star in your own video! The tour is informative, fun and reflects the history of the brand through old marketing memorabilia and brewing techniques. 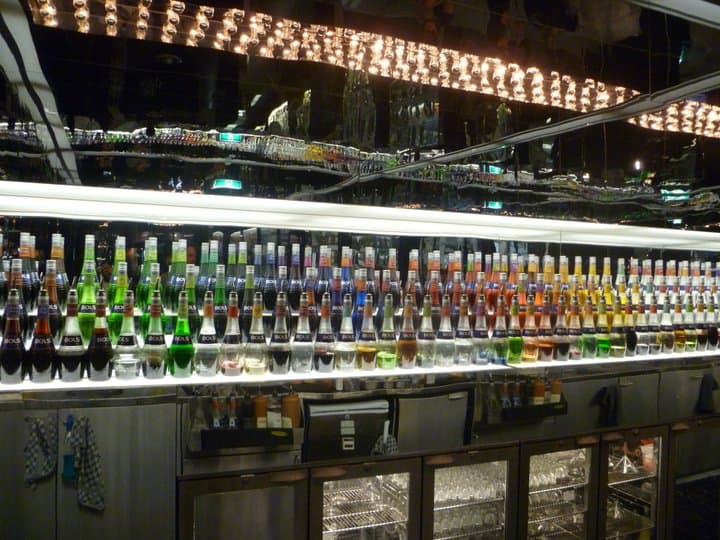 The House of Bols is possibly my favorite museum in the dam.

Its classy and oozes cool – from the minute you walk into the old building to sampling a cocktail at their mirrored bar at the end of the tour – every exhibit you visit tests your senses in the most wonderful way. Telling the story of Lucas Bols, the museum is interactive, engaging and a winner of the Dutch Design Award for the Best Exhibit & Experience – you’d be crazy not to love it!
And if you love cocktails – test your knowledge with the Ultimate Cocktail Quiz!

So there you have it, a tour of the best museums in Amsterdam celebrating all things sex, drugs & beer & cocktails. Did you have fun?

Let me know if the comments if you have been to any of these museums – or if you have found their equivalent anywhere else in the world. Would you recommend them?

related: This post is part of my EUROPE BY RAIL IN 25 DAYS series. want to know where else we go? check out my 48 hour guides for Amsterdam, Berlin, Prague, Krakow, Budapest or Vienna!h

I love visiting Amsterdam. It's the tolerant attitude of the Dutch and fact that there is such an array of attractions that make it, in my view, a great travel destination.

Cute post and tackles some of the more lively aspects of the city. Have been going to Amsterdam for decades now because of work and only if I had a penny for everytime someone walked up to me and asked for directions to the red light area. lol

Thank you - and the Red Light District is certainly is a big draw for a lot of people!

I loved the photographs with the swans! I've been to Amsterdam when I was 17 but somehow I can vaguely remember the trip. Can't wait to go back one day and experience those wild & whacky things that Amsterdam is known for :)

Hi Tess - I think teenage weekends in Amsterdam often result in a hazy memory! I hope you are able to go back and visit one day!

Nice list! These are truly some of the highlights of real Amsterdam, haha! Hope to see them all on our next trip!

Thanks Adrienn! Enjoy Amsterdam - You'll have a blast!

I did a Contiki tour that stopped in Amsterdam and we saw a show at Casa Rosso. Definitely not nearly as sexy as someone might think. I definitely would love to head back to Amsterdam and see some of these other spots that I missed out on (during my one very hazy night in the city).

Ah, there was a Contiki tour at Casa Rosso when we visited - they sat right at the front and made some of the group 'participate'! Highly entertaining for everyone! ;-) But Amsterdam is really worth a return visit if you're ever in the area again!