The State Hermitage Museum in St Petersburg, Russia, is the second largest museum in the world and is home to over 3 million pieces of art from all over the world. Set over 6 sprawling buildings running along the Palace Embankment next to the Neva River, it was founded in 1764 when Catherine the Great acquired a huge collection of paintings and art from a German merchant, and has been open to the public since 1852.

Visitors are currently able to access 5 of the 6 buildings; namely the Winter Palace of Peter the Great – which was the official residence of Russian monarchs between 1732-1917 and is the imposing green structure most recognizable as the facade of the Imperial Hermitage Museum (below taken from Palace Square) – plus the Small Hermitage, Old Hermitage, New Hermitage, and Hermitage Theaters. Visiting any offers a nice slice of Hermitage history for any art or history buff!

We were lucky enough to be granted early entry to the incredible State Hermitage Museum complex (with full photography permits) in May 2018, which gave us 1.5 hours with a small group of other travel writers and photographers to try and capture this amazing place. Photos cannot due justice to the beauty and opulence within it’s walls, but in putting together this photo guide to the Hermitage Museum I hope to be able to show you a little of what you would be able to see should you ever have the chance to visit yourself. Or to stand as a virtual tour of the Hermitage Museum for those of you who either cannot or will not travel to St Petersburg, or wider Russia. 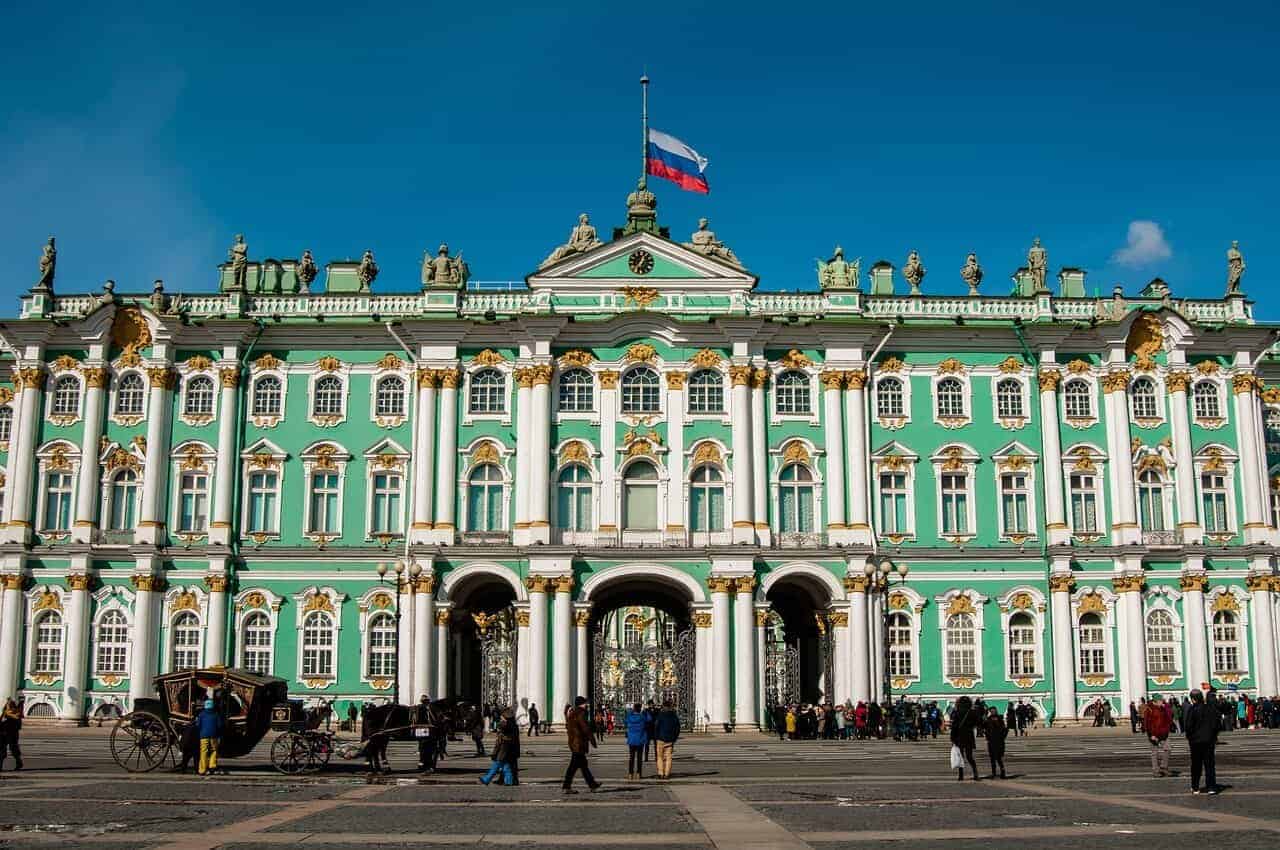 Disclaimer: I visited the State Hermitage Museum as a guest of Princess Cruises on board the Regal Princess Baltic Cruise, however all opinions, as always, remain my own. Read my Full Disclosure Policy Here.

A Photo Tour Inside The Hermitage Museum

Charli from Wanderlusters was my unknowing model(!)

This amazing hall and staircase are now the first chamber you visit upon entering the Hermitage Museum and is the principal staircase of the Winter Palace building. Built out of white marble, adored with decorative gold embellishments and alabaster statues of Justice, Wisdom and other virtues the Russian empire believed they embodied and it is only room in the Winter Palace which extends through the height of the building over two storeys. It is one of only a few locations within the complex that retain it’s 18th Century Baroque style and is a fitting introduction to the opulence of the former Tsars. 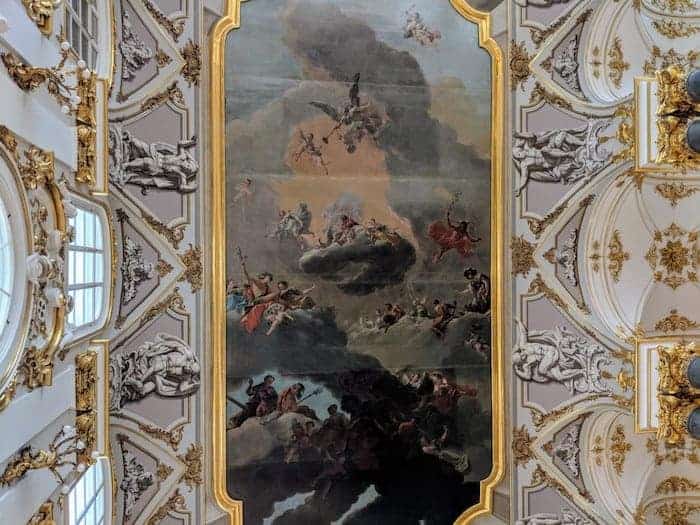 RELATED – Visiting The State Hermitage Museum is one of my Top Things To Do in St Petersburg – and should definitely be included in a city tour of St Petersburg – click the link to find out what the others are! 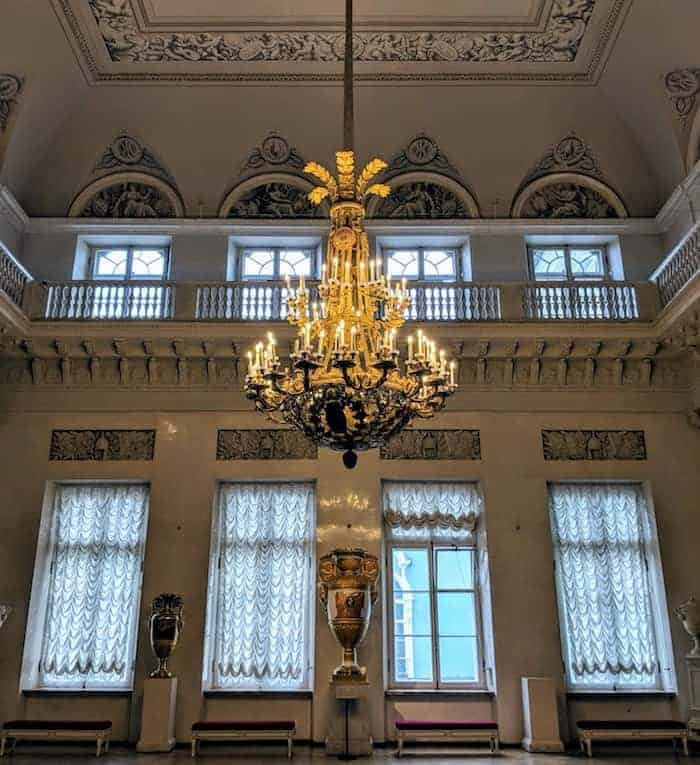 The Field Marshall Hall is the first of the Great State Rooms in the Winter Palace, which were designed to overwhelm visitors with their opulence and grandeur as a display of Russian wealth and military might (I just wish the third curtain had been drawn, the lack of symmetry nearly resulted in this shot not being included!) 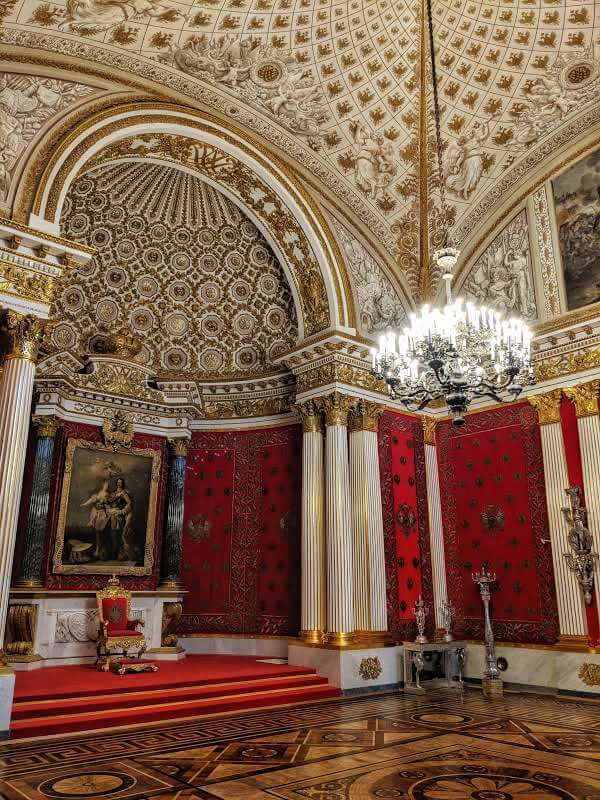 Created for Tsar Nicholas I during the time of the Soviet Union in 1833, the Small Throne Room (also known as the Peter the Great Memorial Hall) features crimson velvet wall panels embroidered with silver double-headed eagles and above which is a beautiful shadow valued ceiling. The room was partially destroyed in the great fire of 1837 (which also destroyed a large portion of the Winter Palace) but was recreated exactly as the architect, Vasily Stasov had designed it. 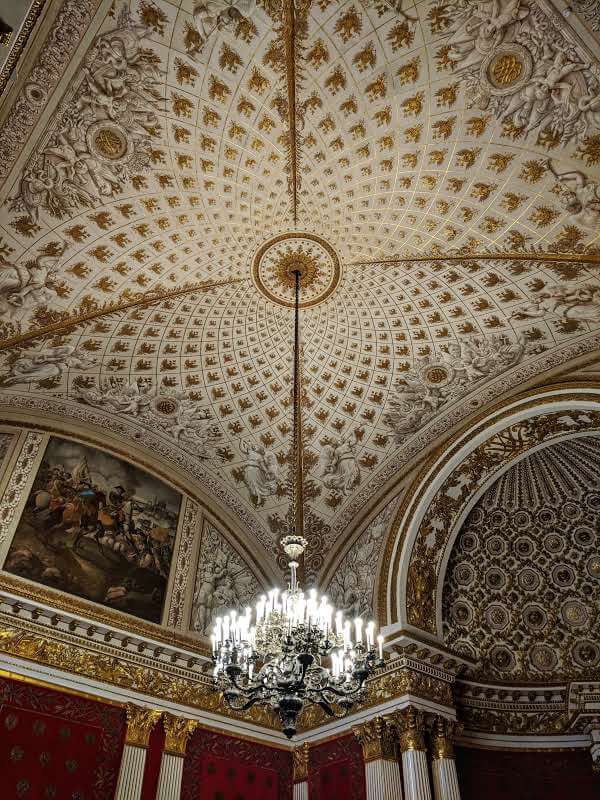 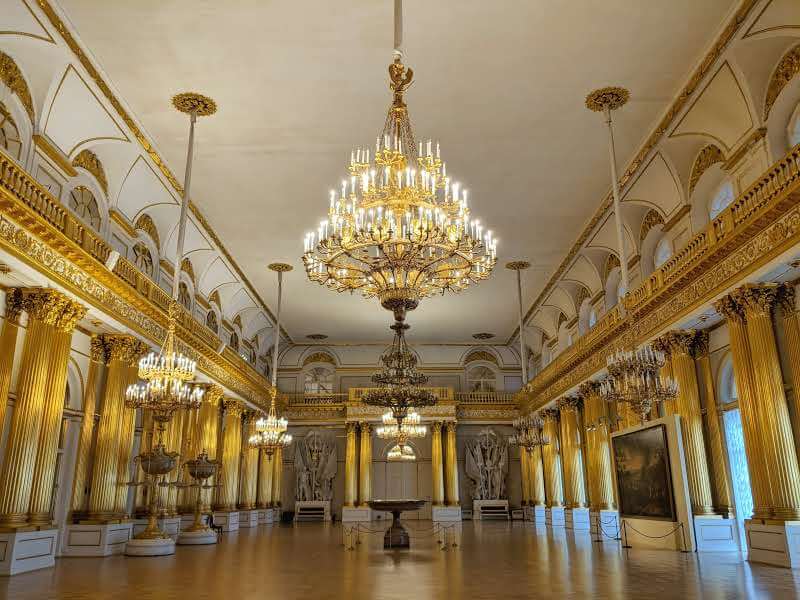 At over 100 sq m, the Amorial Hall is one of the largest and most impressive, originally designed as the venue for official ceremonies, its duo-chromatic white and gold interior is an example of fine classical style. 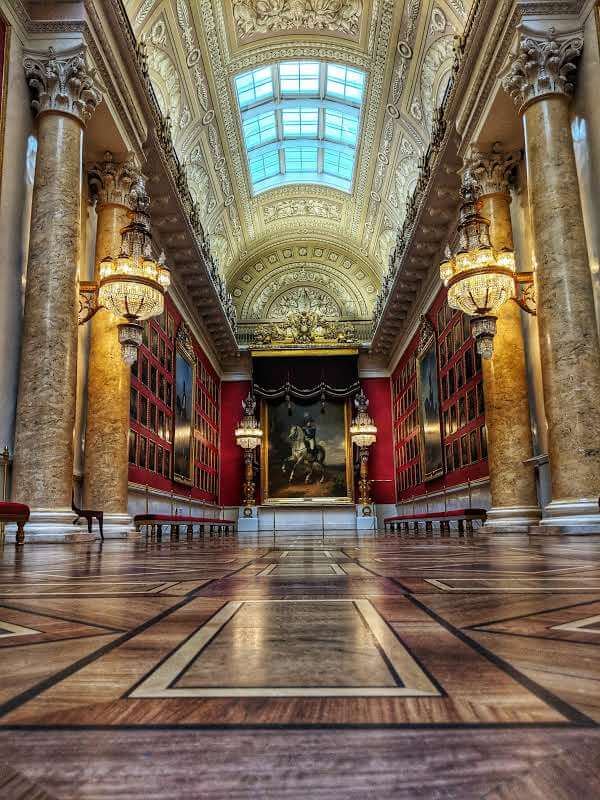 Between the decorative skylight adorned ceiling and the stunning parquet floor and the decadent chandeliers that casually align the walls, the War Gallery of 1812 is an altogether stunning room in the middle of the Winter Palace. Created in 1826 to celebrate Russia’s victory over Napoleonic France, it contains 333 gold-framed portraits of distinguished military commanders who were instrumental in the war along with 13 empty frames which represent those who were able to sit for their portraits. In addition there are 3 larger portraits that hang dedicated to the former allied leaders featuring Tsar Alexander I of Russia – portrayed in front of a distant Paris skyline – along with portraits of King Frederick William III of Prussia and Emperor Francis I of Austria. 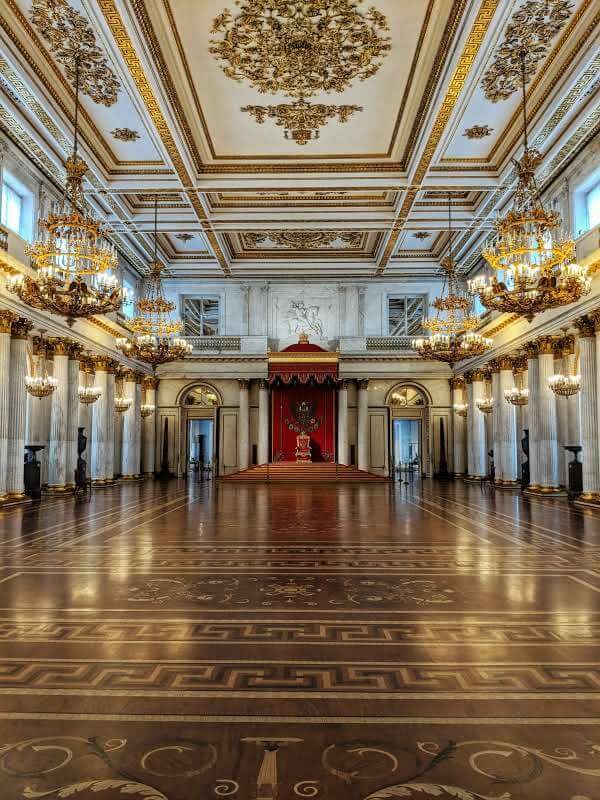 St George’s Hall (the Large Throne Room) is so called because of the bas-relief of St George (the patron saint of Russia) slaying the dragon which hangs behind the throne, which was was made in London for Empress Anna Ioannovna. As the principle Throne Room, it is one of the most significant rooms in Russian history and was the site of many formal ceremonies and elaborate receptions. The parquet floor was created with 16 different species of valuable wood and there are 28 crystal and bronze chandeliers throughout the room. 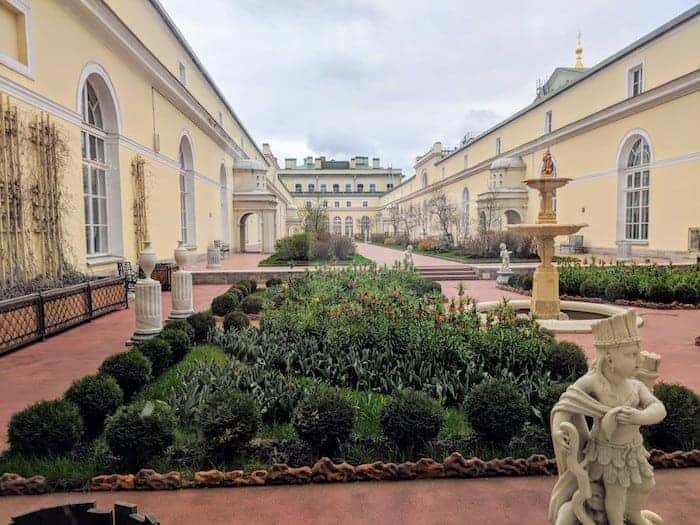 Not a room per say, but the garden that links the north and south wings of the Small Hermitage buildings. When looking out of the window you may forget that you are actually on the second floor of the building. This garden was raised at Catherine’s request and during the great starvation years of the Leningrad Blockade, museum curators grew vegetables here. 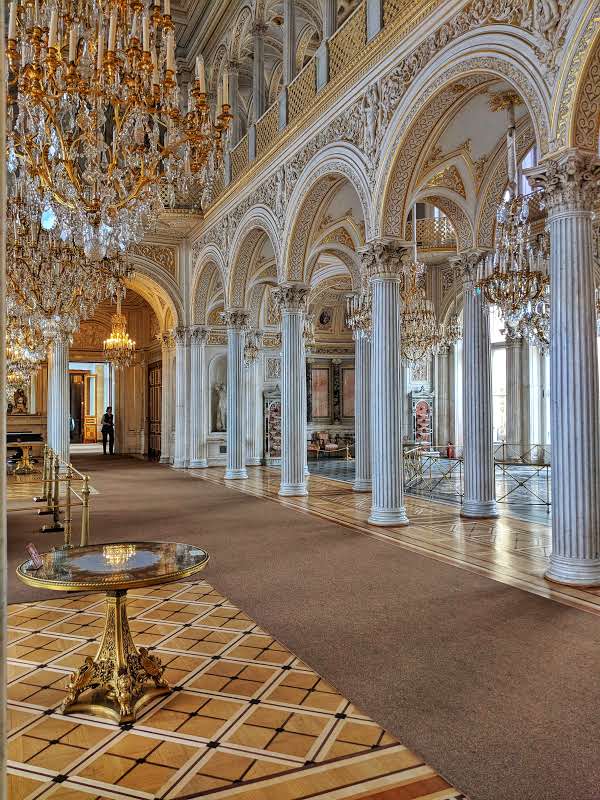 The Pavilion Room stands in the Small Hermitage, so called because Catherine the Great had parties with games and performances which were known as “small hermitages.” In addition to 28 glittering chandeliers and numerous fluted white columns, there is one incredible piece of art housed in this room, which is the pride of the Museum and is even featured daily on Russian TV!

(c) The Hermitage (when I saw it the feathers were down, and it is much more impressive this way!)

The Peacock Clock – a large automaton featuring three gilded life-sized mechanical birds along with other woodland creatures and insects, was created on commission for Catherine the Great in Great Britain in the 1770s and was delivered to the Hermitage in 1781. And it still works! 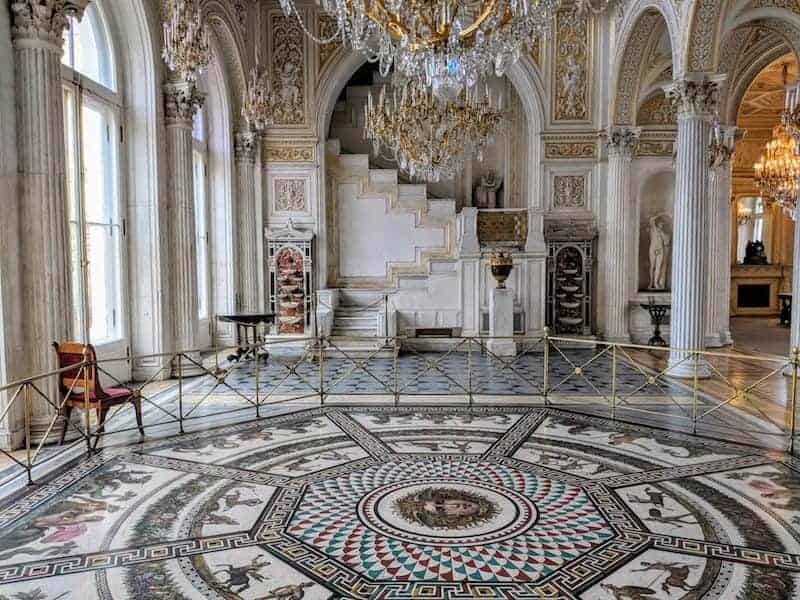 A second notable piece of art in The Pavilion Room is the nineteenth century copy of an ancient Roman mosaic featuring the head of Medusa encircled by Neptune with his trident and other sea creatures, which is set into the floor of the niche opposite the Peacock Clock.

RELATED – I visited The Hermitage Museum in Russia whilst hosted by Princess Cruises – click to find out all about my Regal Princess Baltic Cruise and the other stops we made. 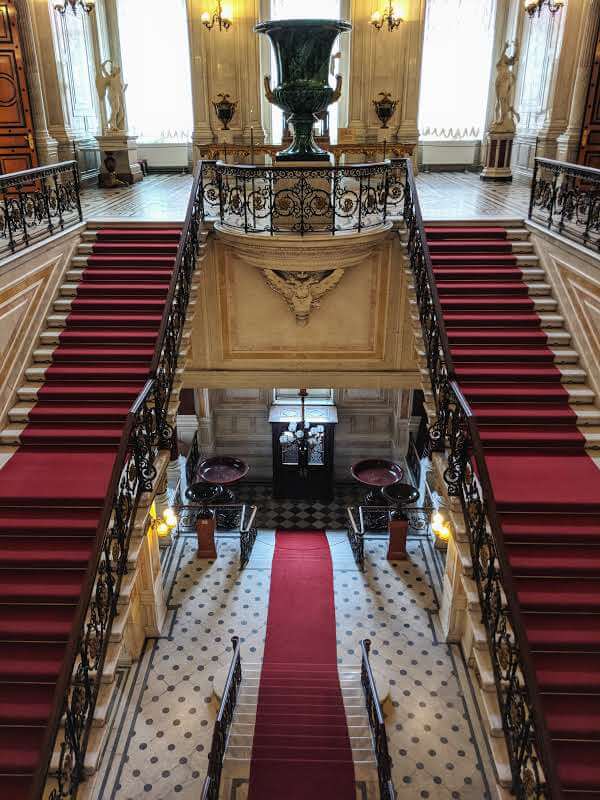 Again, not really a room, but an elegant staircase located between 4 different parts of the museum: The Old (Large) Hermitage, Pavilion Room in the Small Hermitage, Gallery of Renaissance Art in the Old Hermitage and the Rembrandt Hall in the New Hermitage – where they have the largest collection of Rembrandt art outside of the Rijksmuseum in the Netherlands and is a beautiful example of the Dutch Golden Age. 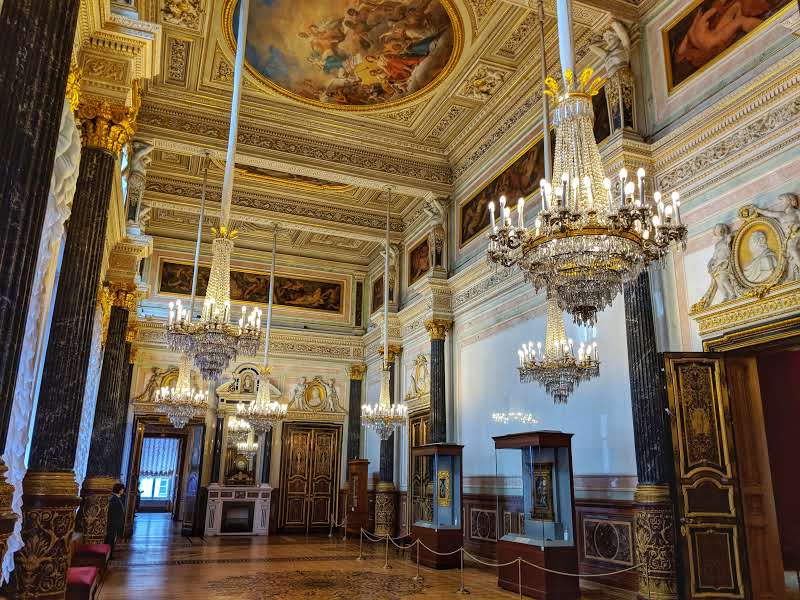 The largest and most striking hall in the Old Hermitage is the Leonardo Da Vinci Hall (known as the Great Hall in the 19th Century. The colorful interior benefits from the natural light from over a dozen windows over two tiers and is finished in an imitation Louis XIV style favored by the French in the 17th Century. 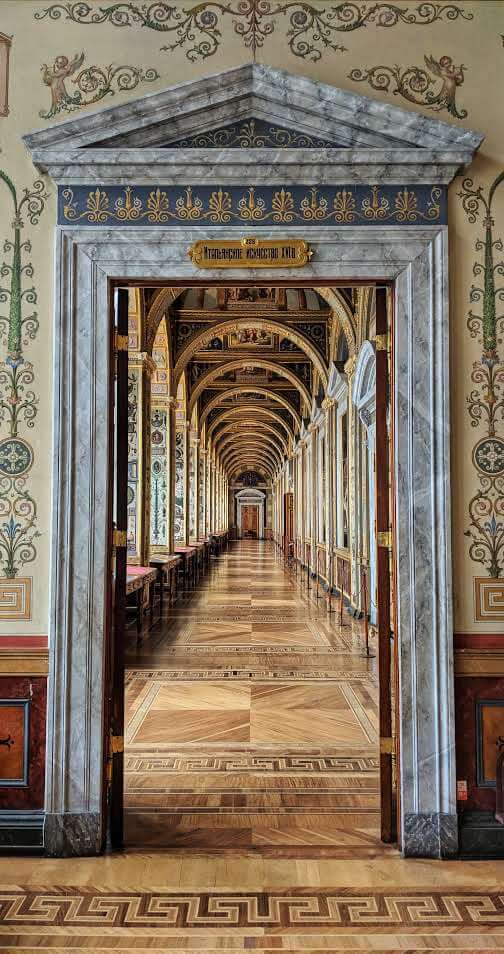 One of my favorite rooms in the Hermitage Museum, it is a replica of the loggia which Raphael had created for the Vatican Palace. 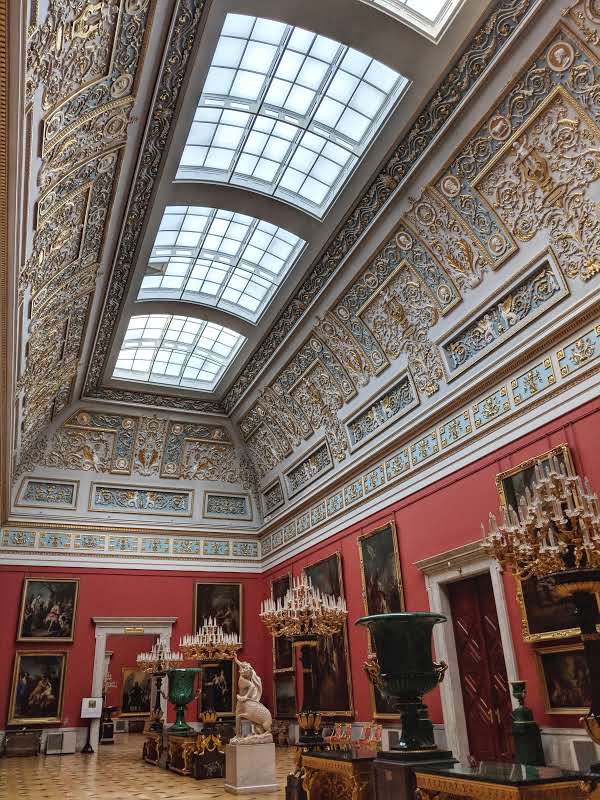 Located on the upper floor of the New Hermitage, the Large Italian Skylight Hall is the first of 3 grand halls designed by Leo Von Klenze which all contain vaulted glazed roofs. Bordered with a frieze decorated in moulded arabesques covered in gilding to create this magnificent effect.

Gallery of the History of Ancient Paintings

Intended to remind visitors of the History of Ancient Art, the white marble statues that line the center invoke memories of Western Europe with Greek and Roman sculptures in a Noe-Classicism style. The 80 painting which line the walls were created by artist Georg Hiltensperger by imitating the ancient encaustic technique – with wax-based paints on brass plates. 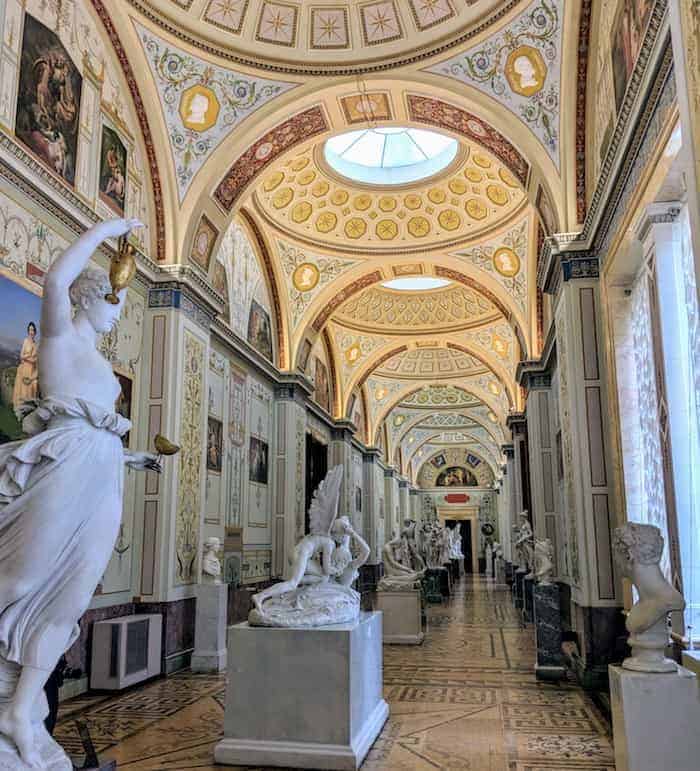 Ceiling Above The Main Staircase in the New Hermitage 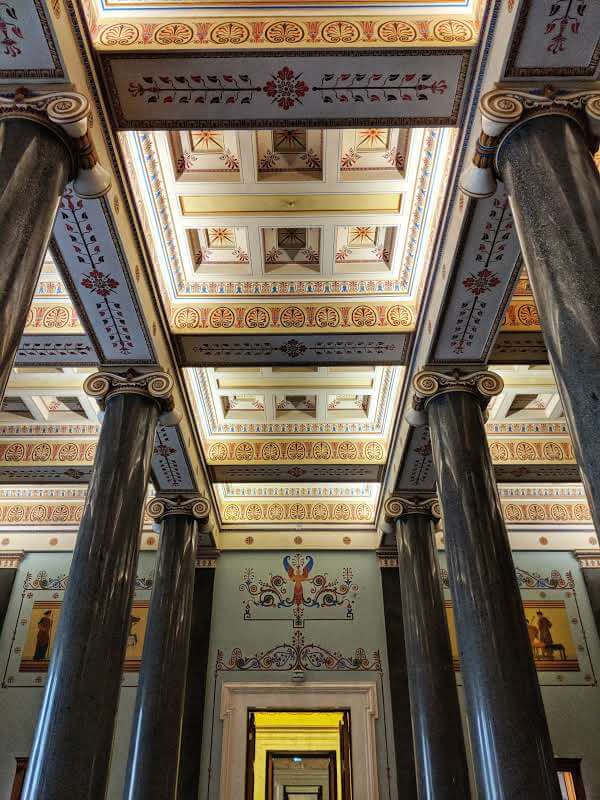 Whilst the main staircase is impressive (an the entrance to the Imperial Museum), it was the ceiling above which caught my attention.

RELATED:  Not a fan of museums? Take a look at what else you can get up two with 2 days in St Petersburg!

Outside The Winter Palace (Side View) 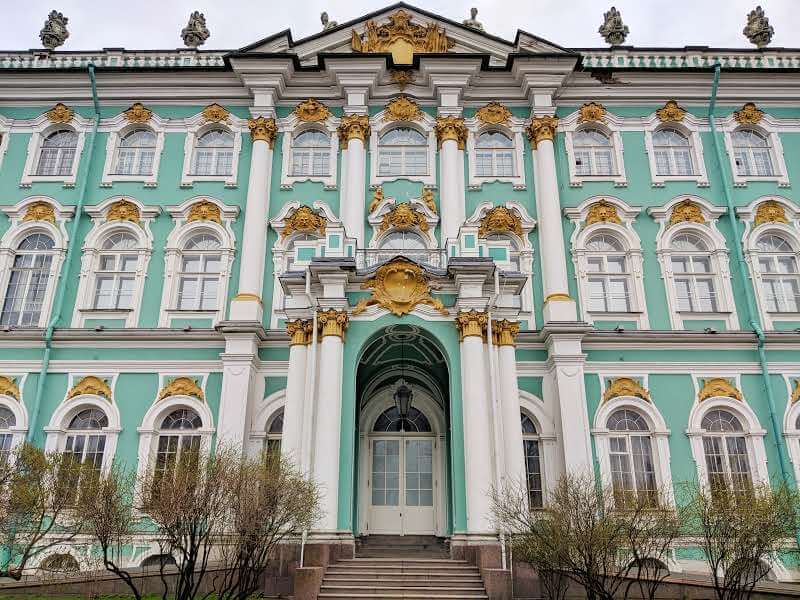 Each of the 4 facades of the Winter Palace are beautiful in their symmetry – but this was the only view I could find after the tour that had no people in front of it. And if you want to know if the early access to the Hermitage Museum was worth it: Take a look at the crowds at the front of the museum just after 10.30am! If that is an advertisement for pre-booking your tickets or joining a guided tour, I don’t know what is! 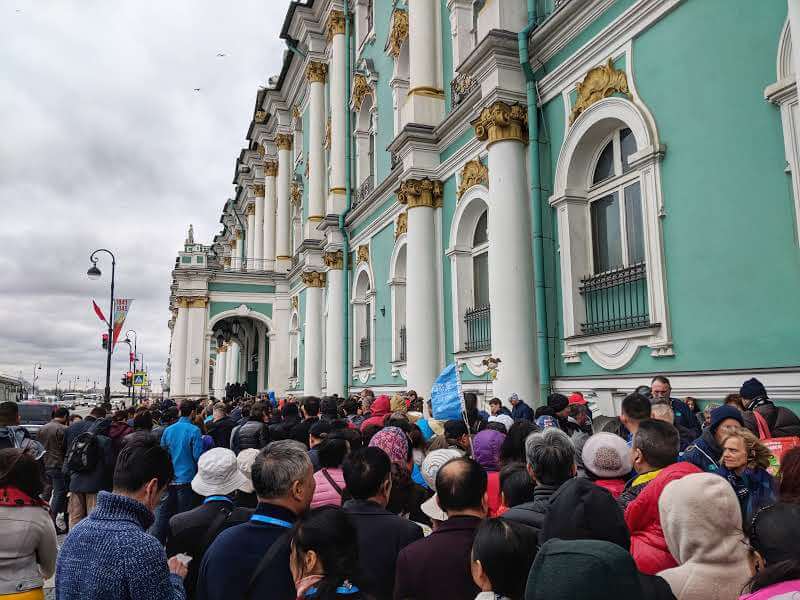 Useful Information for Planning Your Visit to The Hermitage Museum

PRE-BOOK A GUIDED TOUR – To truly appreciate the museum I would highly recommend joining a  skip-the-line guided audio tour with a knowledgeable guide who can point out the intricacies and important artworks that you may not notice if you don’t know t look for them. And with over 3 million pieces of art within it’s walls – that is bound to happen with a few things!

And that’s a wrap folks. I hope you enjoyed this little insight in the the incredible State Hermitage Museum and you have been inspired to include it on your visit to Saint Petersburg Russia. 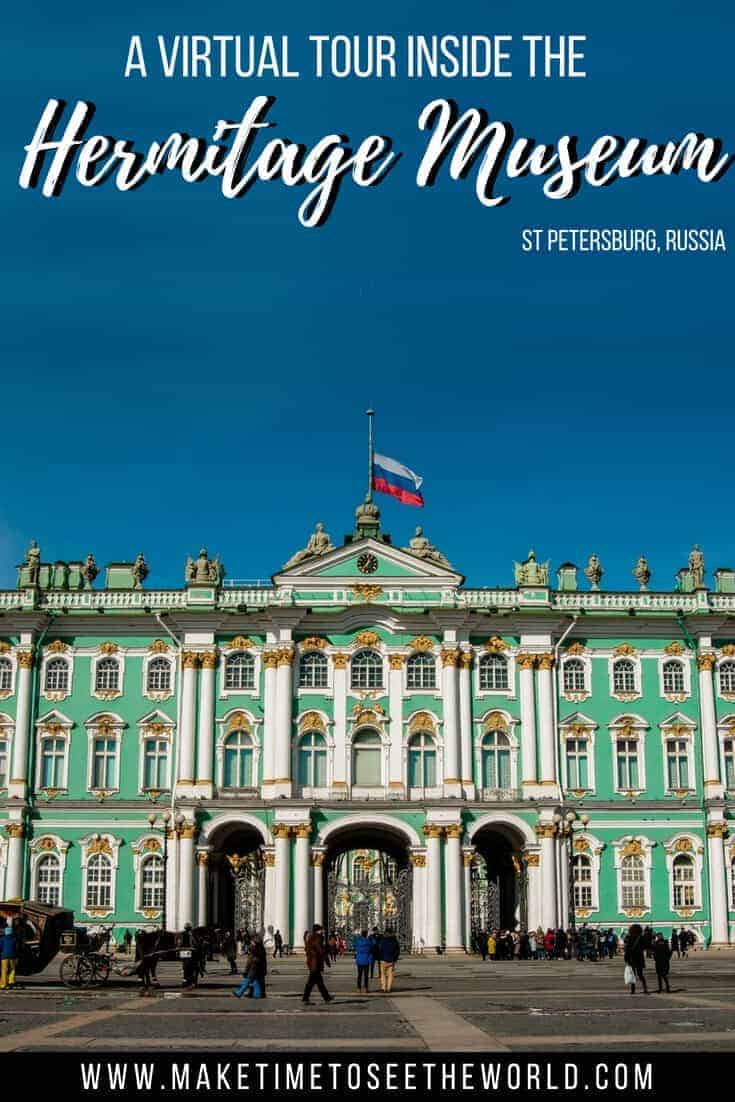 Hi There! Thanks for reading my Photo Tour of the State Hermitage Museum In St Petersburg, Russia. I just wanted to let you know that this travel guide may contain affiliate links, which means if you purchase something after clicking a link, I may get a small commission – which is at absolutely no cost to you. If you enjoyed this article and are going to be searching for some of the things I mention anyway, I would love it if you could click through from the links above & thank you in advance! Read my full Disclosure here.
And thank you for reading the MakeTimeToSeeTheWorld Travel Blog.

Thank you for sharing these beautiful photos of the Hermitage! I bet your post will make many people consider booking a cruise to St. Petersburg :)

So pleased to read this as we were planning on taking this cruise in a few months time. We've been on several Princess cruises and know how well they look after their passengers so it was great to tag along on your photo tour. Now this cruise is back on my radar.

Thanks Lyn - and it was a wonderful cruise. Princess certainly know how to look after their guests. I hope you get to sail this route soon!