[Originally published in 2016, and updated in 2018 and 2023… but unfortunately, the situation hasn’t improved]

This is something I have thought long and hard about – and as a result I have read everything I can find online in favor of the good, the bad and the ugly of AirBnB, and I’ll be honest. The ugly is, well.. pretty ugly.

But let’s start at the beginning. 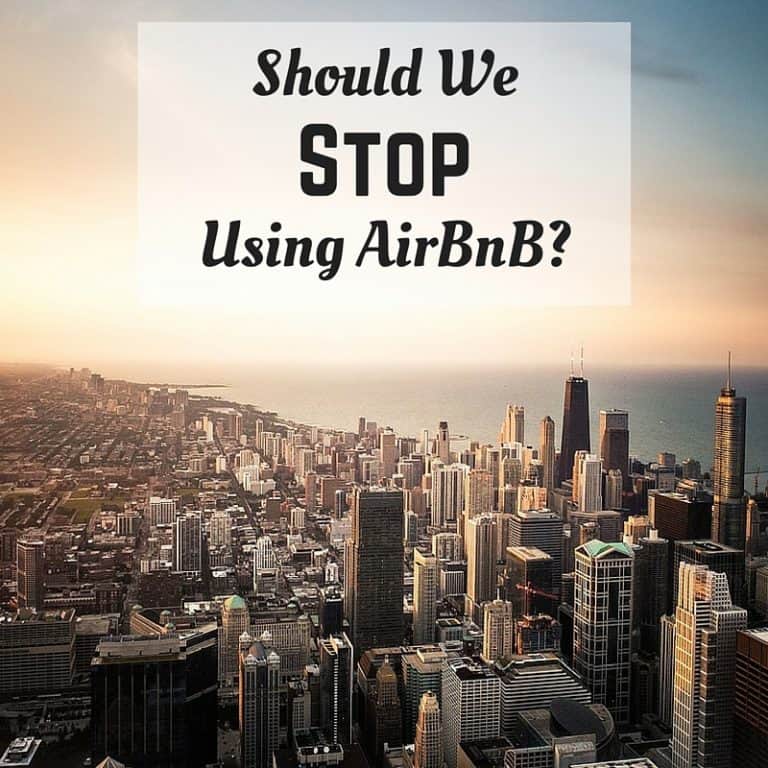 I’ll be honest. I have agonized over posting this. I have used AirBnB in the past – and lets face it, I think you’d have to have been living under a rock to have not used or thought of using AirBnB, and its amazing array of properties since its inception in 2008. It was so easy – pick a destination, pick a place and book. Cute rentals with a personal touch that just seemed so much more intimate than hotel bookings. The world lapped it up. I mean where else can you book a night in a tree house in Nicaragua? Or a bedroom built into a ski lift in France? It was a whole new world of accommodation options and a way to rally back against the unscrupulous hotel chains who have been robbing people blind for years. What could possibly be wrong with that?!

Well, not much. In the beginning. 15 years on and the landscape is a little different and I feel the shine has well and truly rubbed off the AirBnB novelty. I’ve read a few pieces over the past few months that have brought a few issues to my attention and news reports this week of (more!) undisclosed hidden cameras being found in AirBnB rentals is what has prompted this write up.

Ultimately, I believe there are 5 reasons (in 3 categories) why we should stop using AirBnB, but they all boil down to one key feature – AirBnB’s lack of regulation – that is responsible for its current problems, and could be  – should be – responsible for far-reaching consequences.

On all fronts. There have been reports – and even a working paper by Harvard Researchers – which show that AirBnB owners can be discriminatory – race, gender – you name it, there has been a complaint.

You see, with the advent of social media came the need to for a ‘profile’ and with it a profile picture. Something encouraged by all social networks citing better interaction, engagement and that more people will identify with you as a person instead of a faceless (but pretty) picture of an island paradise or a sunset (for example.) Enter a world where you can be judged from anywhere in the world, by anyone who happens across your profile – without you even noticing. And for the most part people are tolerant. People are good. But what about when it comes to commercial transactions?

The argument from some is that you should be able to decide who you want to stay in your property – but really people – is this OK if your reasons are based on racism and discrimination? I think not.  AirBnB have always had a policy of removing users who breach their service agreement (for things like discrimination!) but have gone one step further recently when they declared that it will rid the platform of racism. At the same time it changed its user agreement to prevent people from suing as a result of unfair treatment. Nice one AirBnB.

As of November 2016 AirBnB introduced a Discrimination & Belonging Policy. This means that all current and future users of AirBnB (hosts and guests) must agree to

Failure to agree to this will mean you can no longer use the platform. This is a great initiative and although it may not change the attitudes of those presupposed to discrimination – it will help where action must be taken when the policy is violated. I’ll certainly be watching closely to see what happens on such an occasion but for now, Good work AirBnB.

2. Its Owners Are Money Hungry

Now this one is a three-part-er:

We live in a capitalist society. There is no denying it. One of the things that was so great about AirBnB was that people were renting their places out for a fraction of the cost of a hotel room. You got a more personal experience, to feel like you were at home in someone else’s home – a advertising slogan that has bolstered AirBnB for years. But now, those cheaper accommodation options are suddenly the most expensive accommodation options out there.

I, myself, have searched for a property on AirBnB – only to find the same place on a competitor booking site such as Booking.com or Agoda – $100 or more a night cheaper. Owners now seem to think that the AirBnB name guarantees them a higher price tag – and people who don’t think to look any further – because they trust the brand – are still being ripped off. AirBnB became a success on the back of people not wanting to pay inflated hotel charges, and they have now become what everyone disliked – without actually telling anyone this!

As a secondary to this, AirBnB is now having a negative effect on long term housing in big cities. Where owners  would have previously rented their properties to tenants on a yearly basis, they have decided it is more profitable to restrict their rentals to short term occupants. This has resulted in cities struggling to house their working population and has even seen some cities – such as Berlin and Chicago – legislate against the ‘sharing’ economy.

And third – is where owners have listed their property for a set price, taken a booking and then a few days prior to arrival, they contact the guest stating that they are no longer able to honor the booking.

Excuses I have heard for this have been family emergencies, change in circumstances etc (which may be genuine reasons) but look dodgy when the property is relisted hours later at a much higher rate. Some even have the gall to re-contact the original renter and say it is back on the market – and expect them to pay the inflated price. Which sometimes people are forced to do as they don’t have – or don’t feel like – they have any other option. Not cool AirBnB. Not cool.

3. Its Owners are Unscrupulous

Unscrupulous is defined as “having or showing no moral principles; not honest or fair” and (leading on from the above) I think it is the perfect way to describe those who have installed (undisclosed) “nanny cams” in their properties to monitor what renters are doing.

AirBnB do have a policy of permitting nanny cams outside of the bedroom and the bathroom, and state they must be disclosed to all renters.

However, it is never OK to film someone without their consent but is the ultimate violation of privacy for it to happen in somewhere where you have paid to stay. You wouldn’t accept this kind of behavior in a hotel – so why would it be OK in a rental property?! One woman has sued AirBnB for negligence, and has included charges of wire-tapping, privacy intrusion and emotional distress.

This suit was not the first time AirBnB has run into problems with its privacy policy, and it is not the first time that complaints have been poorly handled with no corrective action taken.  Pop over to AirBnBHell where they discuss the worst behavior of both hosts and  guests (because they’re not all that great sometimes either and who’s own horror stories have been covered elsewhere!)

**It’s important to note that AirBnB as an entity has no control over the actions of its hosts – to a certain extent – and people are going to try and make a buck wherever they can. But these practices are not an example of a nice and community-spirited society.**

Related: 5 Reason’s Why Travel Is The Solution to 21st Century Society

So what does this all mean?

If you haven’t guessed it. I’m not so much of a fan of AirBnB at the moment. The rise of social networks has created a market of sharing apps and platforms which on their face should enhance society. But where they perpetuate – or even simply, permit – racism and discrimination, is it something we should be encouraging? Sure, you can find super cool and quirky accommodation options – but do you want to take advantage of those if your neighbor from a different ethnic background, sexual orientation or gender identity cannot? I don’t.

And please don’t get me wrong. This article is not directed at everyone who hosts on AirBnB. As I said at the top, people are generally good. And I know that for a lot of people, the positives of using AirBnB far outweigh the negatives. But these issues – albeit the consequence of the actions of a minority of hosts – are too large to ignore and should be something that is a consideration in deciding to use the platform.

What are your thoughts on AirBnB? Do you think they are mostly good? Or that these issues are too big to be ignored? Let me know in the comments below – and if you liked this post, please tweet, flip, pin and share on Facebook – I would really appreciate it.

I have different reasons for my dislike of airbnb and it comes from the experience of being a host with excellent reviews for 2 years. One guest with a problem changed that and airbnb is allowed to kick host and guest off their platform with no chance to explain your side if it falls into certain category. You are labeled as guilty with out a chance to prove you are innocent. It's not a fair call and can financially ruin someone's life when their sole means of income is stopped in the blink of an eye. I now know they can do this because of the power they are given with host who choose to only list on Airbnb, giving them so much popularity that could be spread among other booking sites. If I had also used other platforms I would not have fallen so hard. I have tried every way to contact them and they give same answer, we are not required to discuss anything or share any reason for our decision.. I couldn't even access my profile to get my tax info to file taxes for 2018. After speaking with them and told they would get back to me because it's understood that I have to download my 1099, I receive an email regarding my recent call stating the same as above. They appreciate my call but as stated in their policy they will not allow me to log in and are not required to give me any information as to why.. I'm not the only one this has happened to and it's terrible that they have the power to treat people this way. Thank you for your article and I hope you still get notified since it was written a couple of years ago.

Great article and very well explained. I believe in professionals so this is a very useful article for everyone. Many thanks for your share.

Cancelled my account because it requires a mandatory credit card stored online. Agoda, booking.com don't require this and unfortunately it is NOT safe to do. You can refer to the many big companies that have online credit card records hacked in the news.

I have not actually stayed in Airbnb before, and not heard any bad feedback about it either. I have found my globetrotting buddies only have excellent things to say about their experiences too. I will be sure to do my research before using them in the future.

I have only had good experiences with AirBnB, but I too have been rattled by the horror stories. I don't see why it can't be regulated a little better.