We visited Phonm Penh, the capital of Cambodia, on our way to Angkor and although our time was short, the memories are burned into my mind. 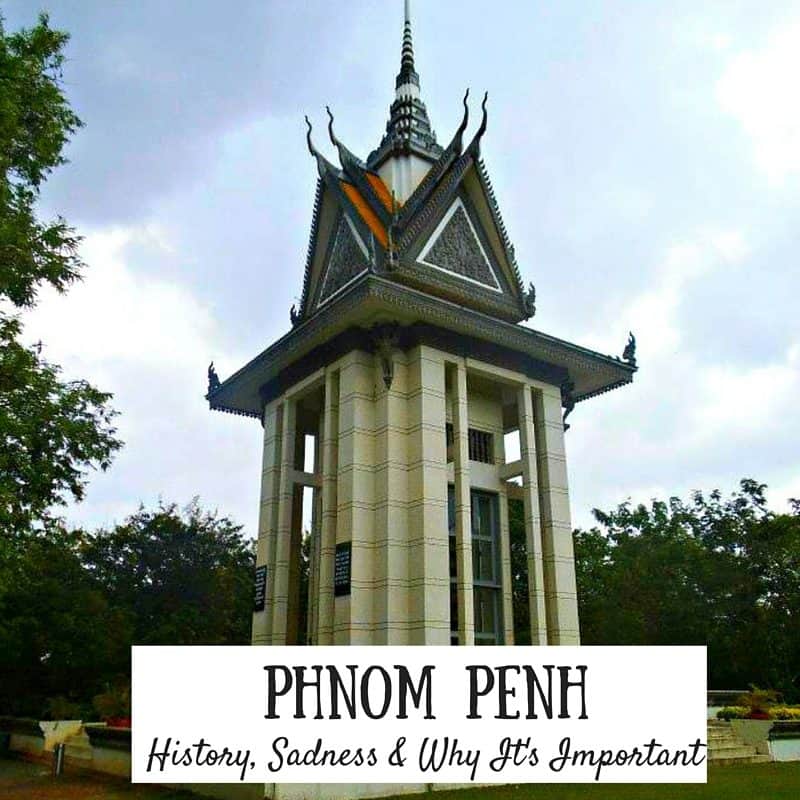 Although in may ways Phnom Penh is reminiscent of other south east Asian cities – adorned with temples and pagodas and filled with the smiling faces of local people, the remnants of a terrible past are there for all to see.

Most of you will have heard of Pol Pot, a staunch communist, and be aware that he killed over a million Cambodian people whilst he was at the head of the Khmer Rouge between 1975 -1979. It has been estimated that 1.5 million (out of 7-8 million) people died of starvation, execution, disease or overwork under his reign. That’s almost 20% of the population.

After taking power in Phnom Penh, the Khmer Rouge evacuated the city, sending 2.5 million people into the surrounding countryside. Doctors, civil servants, teachers – and any skilled worker, were stripped of their possessions and relegated to manual labor in the fields in what was the Khmer Rouge’s attempt to engineer a class-less society. They referred to this mass displacement as the ‘re-education process.’

Those who refused to comply – or complained about there roles were tortured and killed at infamous S21 Prison.

RELATED: Find out all about how to get around and public transport in Phnom Penh here.

At only $2USD per person entry fee, it provided an insight into the atrocities committed under Pol Pot and the Khmer Rouge. Its tragedy emphasized only by the fact the buildings had once been a school – a place of education and safety – which were ultimately used to torture, maim and kill. Before before we go any further: the rules of incarceration, as displayed at the entry: 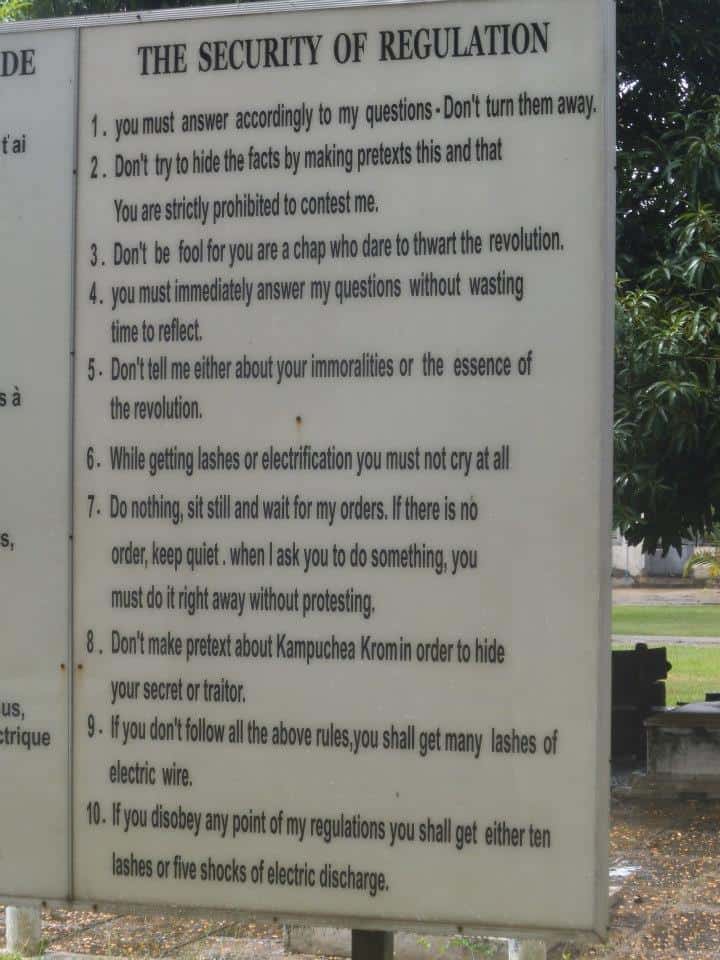 The complex itself comprises of 4 buildings and each one shows a different aspect of the prison. Building A was the the torture rooms where the bodies of the final 14 victims were found. Those 14 have been laid to rest directly in front of the building. Inside these rooms are the beds the victims were chained to, some of the implements used to torture them and black and white photographs of how they were found.

Building B showed picture after picture of the prisoners (each person was photographed when they entered the prison). Men, women and youngsters no more than children. None were spared. Upstairs there was an exhibit showing the fabricated confessions that inmates were forced to sign. Each one read in a similar manner, obviously written by the same people with only a few details changed for each person. How those in power could not have noticed (which some have claimed) is beyond me. 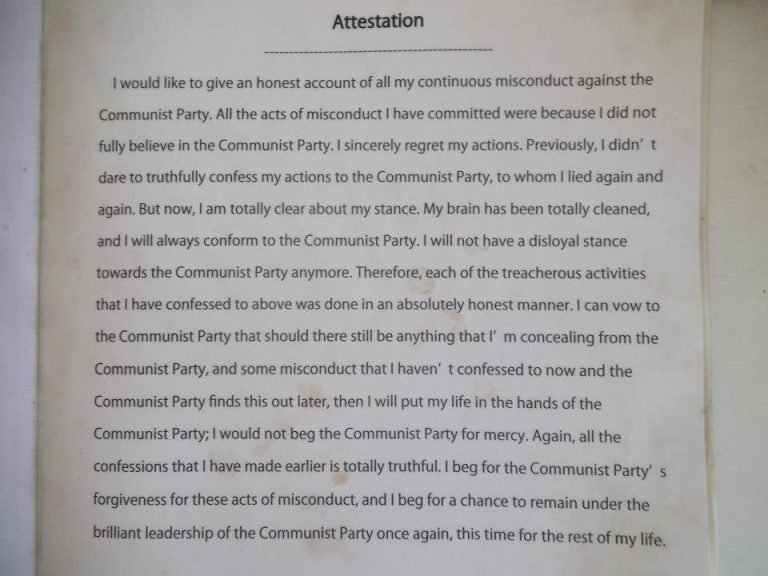 Building C showed the different cells used to hold the prisoners. The spaces which multiple people lived in we’re so small, the individual cells even smaller, the bloodstains on the floor a reminder of the horror.

Building D, displaying numerous human skulls, concentrated on the cases being brought against key members of the Khmer Rouge and the crimes they had been charged with. It shocked me that in one of the cases the defence given was not that they didn’t know what was happening or even that they hadn’t participated, but that they couldn’t be guilty because the Khmer rouge as a political party were illegal. It’s truly sad that despite all the years that have passed since the atrocities occurred there has only been one conviction (of the guy in charge of the prison) and the other key players seem further away from punishment than ever. Pol Pot himself died in 1998 without ever being brought to justice.

A visit the prison will provide you with a new understanding of the horror Cambodians have lived through and give you a renewed respect for their resilience. They are after all a nation stripped of its academics, it’s teachers and its doctors and a community forced to rebuild in the wake of such a horrific hisory – that isn’t really all that historical!

If you thought the prison was a sobering experience, but feel compelled to delve deeper into a dark part of Cambodia’s history, ensure you follow up your visit of S21 with the audio tour at Cheoung Ek Genocide Museum – also known as The Killing Fields. (We hired a tuk tuk for the afternoon and were charged $12 for the round trip from the hotel – S21 – Killing Fields – hotel.)

It took about 30 mins to reach the fields on some quite rough roads, there is a lot of dust and you really need something to cover your nose and mouth if traveling in a tuk tuk with the rain screens up.

The $10 entrance fee provides you with your own audio player and headphones (and large umbrella’s if you need them!). 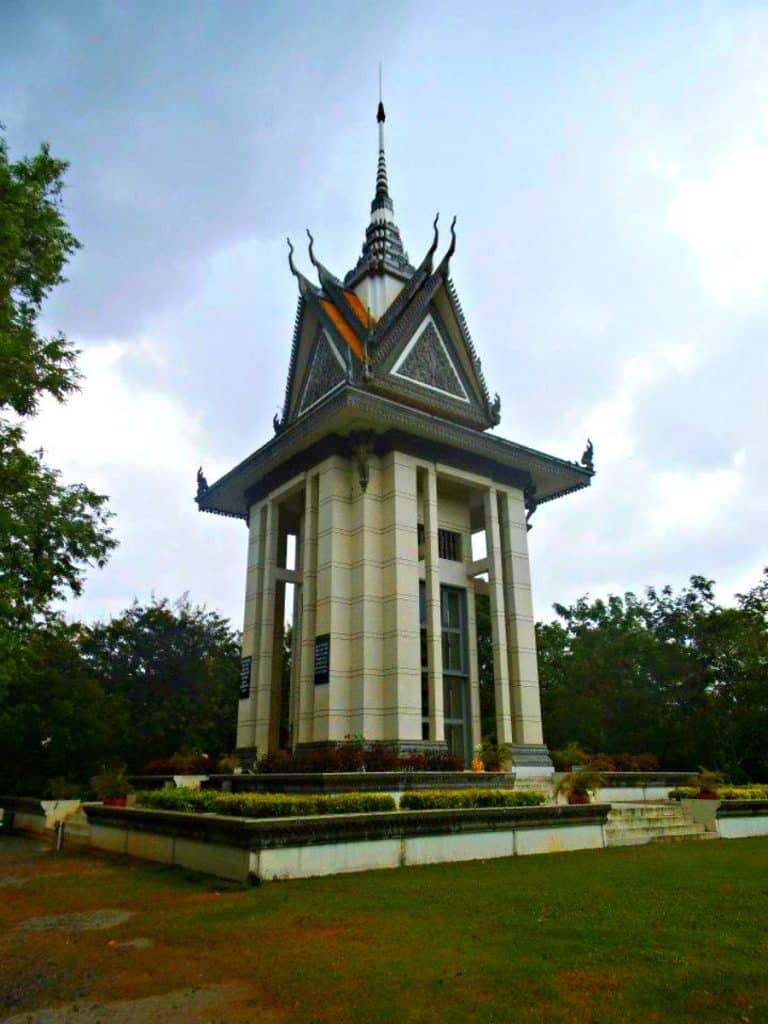 The imposing stupa, filled with human skulls, greets you as you enter the site.

The audio guide directs you to numbered sites and explains what buildings used to stand there and their purpose. None of the original buildings remain today and the only structure is the stupa filled with human skulls, which constantly draws your attention and brings home the fact that everything that is being said on the guide is not some twisted fiction but is what actually happened.
The guide is concise and informative, with additional sections you can listen to on demand for more information about a certain point/area.

The killing tree was particularly horrific and it was explained that it was named so because the guards did not want to waste the few bullets they had and so they swung babies and small children by their legs against the tree to kill them.

The craters cover the landscape and are remnants of the mass, shallow graves that used to cover the site and they did not seem big enough to hold the number of people that had been buried there. The smell of decomposing flesh in and around the site must have been truly horrendous. 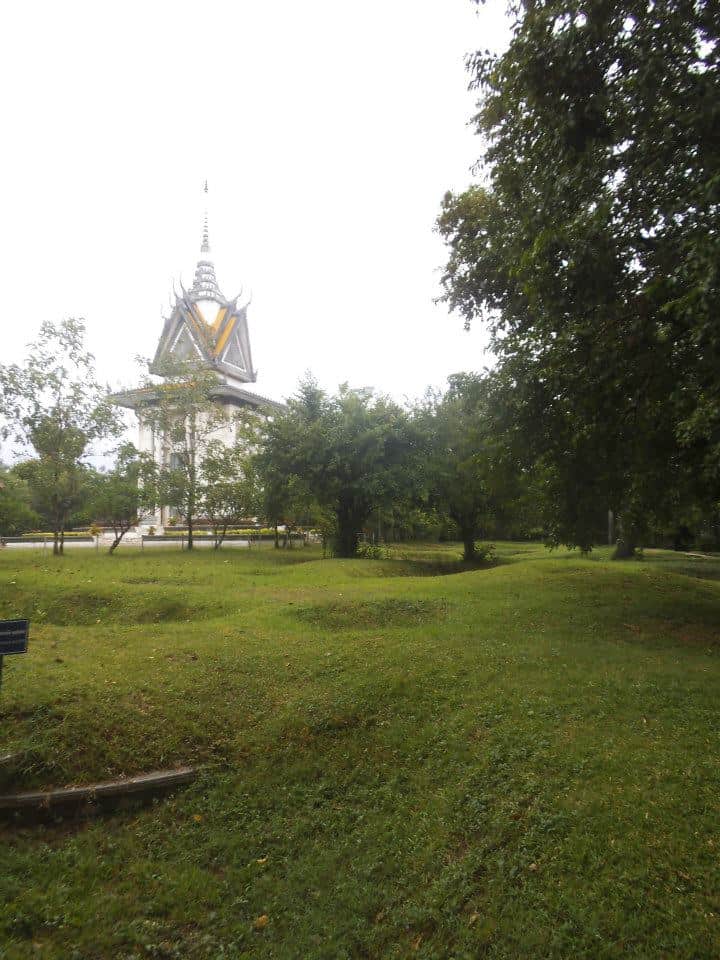 One point I didn’t particularly like was that on the audio guide it said that following the sites discovery, heavy rain would dislodge more bones from the ground but this had ceased in the past 10 years. Despite this there seemed to be ‘newly discovered’ bones and scraps of clothing sat on top of Perspex boxes throughout the site. I don’t believe they were all discovered that day or even that week/month and such remains should be treated with respect. As it were I felt they had been left out for tourists to increase the ‘gore’ factor. Something which is entirely unnecessary. Believe me, the site and what it stands speak to the horror all on their own.

The site closes at 6pm so give yourself a good couple of hours to give the tour the respect it deserves.

I didn’t know much about Pol Pot and the Khmer Rouge before arriving in Cambodia but came away with an understanding that would have taken weeks to read about. I feel too often (some) people visit places and only write about the wonderful – and uplifting – experiences they have. But without making the effort to understand the history of a country, including the parts that are less than perfect, we do a dis-service to those people who have lived through it to tell the tale. It’s important to highlight the atrocities, even if only the pledge that we will never allow them to happen again.

It still blows my mind to think that this genocide occurred less than 50 years ago (and 30 years after Hitler!) – and so occurred in my parent’s lifetime. Transferring that to Cambodia, the people you walk by on the street, their parents may have been victims of the Khmer Rouge. It’s a sobering thought.

What is sadder still is that the Khmer Rouge trials were (and are!) a complete failure. Hearings which have cost over $200 Million US dollars have resulted in only 8 indictments and 3 convictions in what was the worst Genocide witnessed in the 20th Century. The trials continue, but have been called a sham by many observers.

Together, S21 and Cheoung Ek provide thought provoking museums showing the cruel nature of humanity – and hopefully by understanding this, we can move forward as a world united against allowing anything like this happening again.

Have you visited Phnom Penh? Did you go to S21 & Cheoung Ek? What did you think?

Interested in traveling to Cambodia? Check out these Tips for Travel in Cambodia

If you liked this article please pin, share and spread the word! 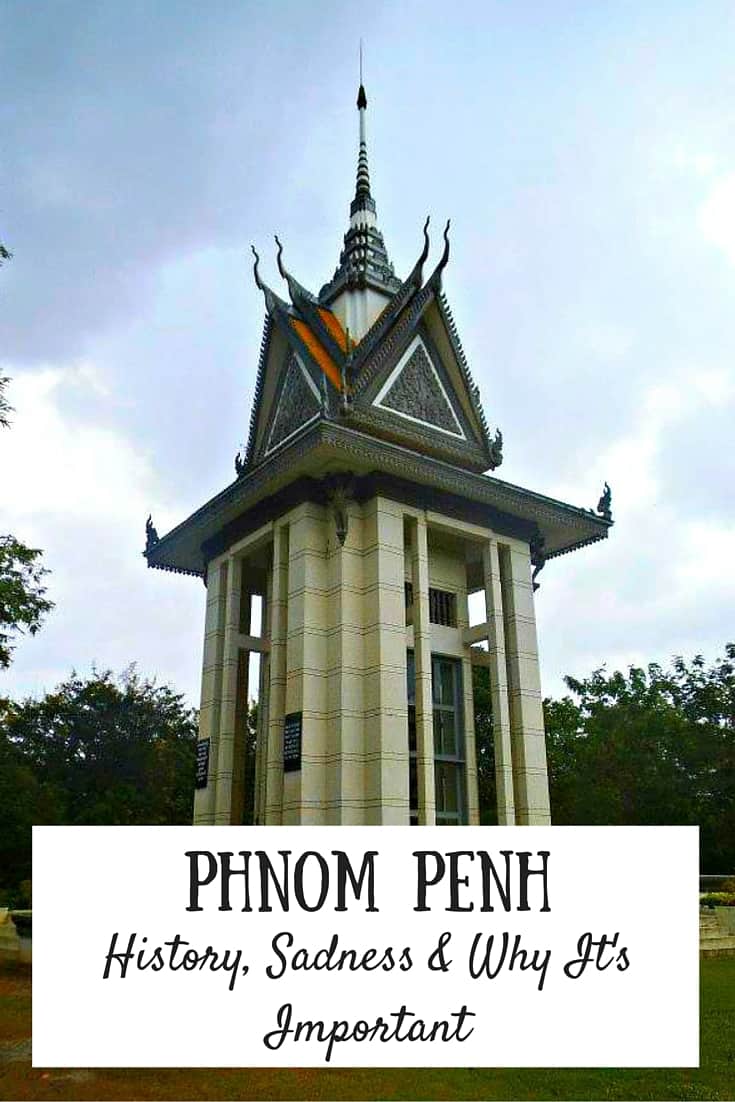 Even if it is a sad part in history, I think it is worthwhile to visit both places. People need to be aware what happened, perhaps this creates awareness that this cruelties should never happen again. We visited both places, feel free to have a look at our impressions if you like S-21 Phnom Penh – The Gate to Hell http://blog.myvideomedia.com/s-21-phnom-penh/ Killing Fields – Hell on Earth in Phnom Penh http://blog.myvideomedia.com/killing-fields-phnom-penh/

Vicki, this is a beautiful piece! I learned about the Khmer Rouge back in high school and never understood how there wasn't as much outraged about this travesty as other "genocides." You're right, we often write about all the wonderful things we see and bury the ugly past under the rug. I think it's absolutely important that we understand both to appreciate the people and the culture.

Thank you Hung, visiting these sites really had an affect on me that I wanted to share for those that haven't had the opportunity to visit or learn about these atrocities.

I still remember vividly my visits to S21 and the Killing Fields. I saw teeth and pieces of clothing in the paths. It was horrific. So recent in terms of social history too. I read a book called 'First They Killed my Father' when I travelled through Cambodia and the personal story was heartbreaking. I'm so glad you've written about this, we should never forget. Thanks for sharing

So tragic. Thank you for sharing light into this, I will admit I didn't know much about it before and haven't been to Cambodia yet. When I make it there though, this will be important to see.

What a haunting place to visit. I am glad that places like this exist to connect us with the darker parts of history and remind us that we should never repeat them.